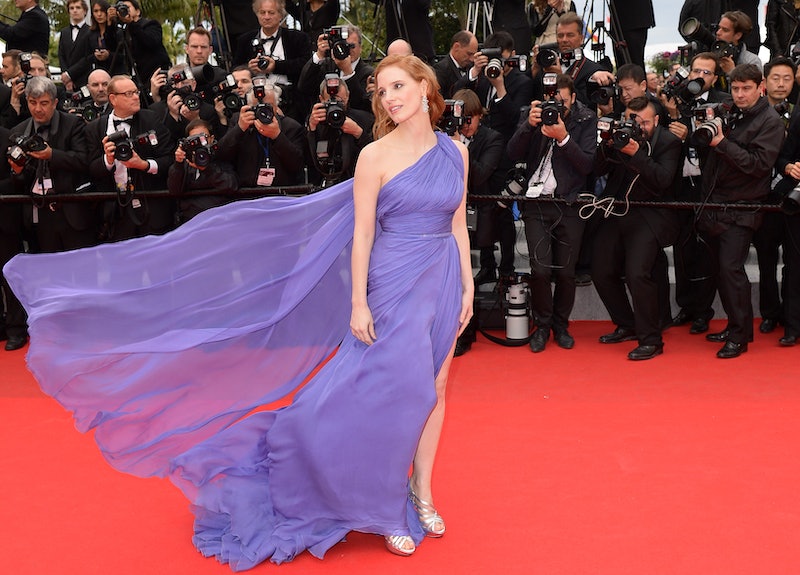 Besides being wildly talented and recognized for her acting chops with numerous nominations and awards (including a Critics Choice MVP Award this season), Jessica Chastain is fabulously talented at not giving a damn. In an interview for the February 2 issue of People, Chastain commented on her relationship with her long-time boyfriend Gian Luca Passi de Preposulo saying that "everything is fantastic" and opened up about her feelings on marriage. She explained, "I'm not quite sure of what I want in my life, and who knows if marriage is part of it, so to me marriage is not an important thing."

I am all for more celebrities being open about not necessarily wanting to get married. Not that I don't believe in marriage or don't get excited when celebs get married so I can vicariously bask in their dream weddings, but there is a heightened expectation in Hollywood, for female celebrities especially, to tie the knot and have baby bumps so we can splash them on magazine covers and dissect them.

This isn't the first time that I've gotten a sassy, speak-my-mind vibe from Chastain. In her speech accepting the Critics Choice MVP Award, she called out Hollywood for its racism and prejudice and urged her colleagues to incite change actively. Accepting the award on Martin Luther King Day, Chastain said, "[Today] got me thinking about our need to build the strength of diversity in our industry, and to stand together against homophobic, sexist, misogynistic, anti-Semitic, and racist agendas."

And even that act of putting a mirror to Hollywood got her backlash. A lot of haters commented on the speech with ugly racist remarks, and Chastain responded beautifully that she can't believe so many people can be so hateful. Do you know how hard it is not to give a damn about what people say about you? I get one threatening reply in my Twitter mentions and it sends me into a self-loathing spiral.

Sure, celebrities are probably somewhat hardened and immune to criticism, but when it extends to their personal character, how could they not be affected? Chastain has somehow managed to stay private despite her rising star, but at the same time, she has shared some powerful personal details about her life that can provide insight to young girls. She's revealed that she dropped out of high school and that ultimately it was the right decision for her, and that she was literally called too ugly for some roles.

Adversity is hard enough to overcome without the magnifying glass of fame burning a hole in you at all times. It must get SO old and tiresome for female actresses to constantly be asked about when they are getting married, and I love that Chastain said that it wasn't important to her right now. I think she has a DGAF attitude, but by that I don't entirely mean that she doesn't care what people think, rather that she rises above the trivialities of Hollywood to represent something bigger and better. And that's what puts her in the top tier of talented badasses of Hollywood.