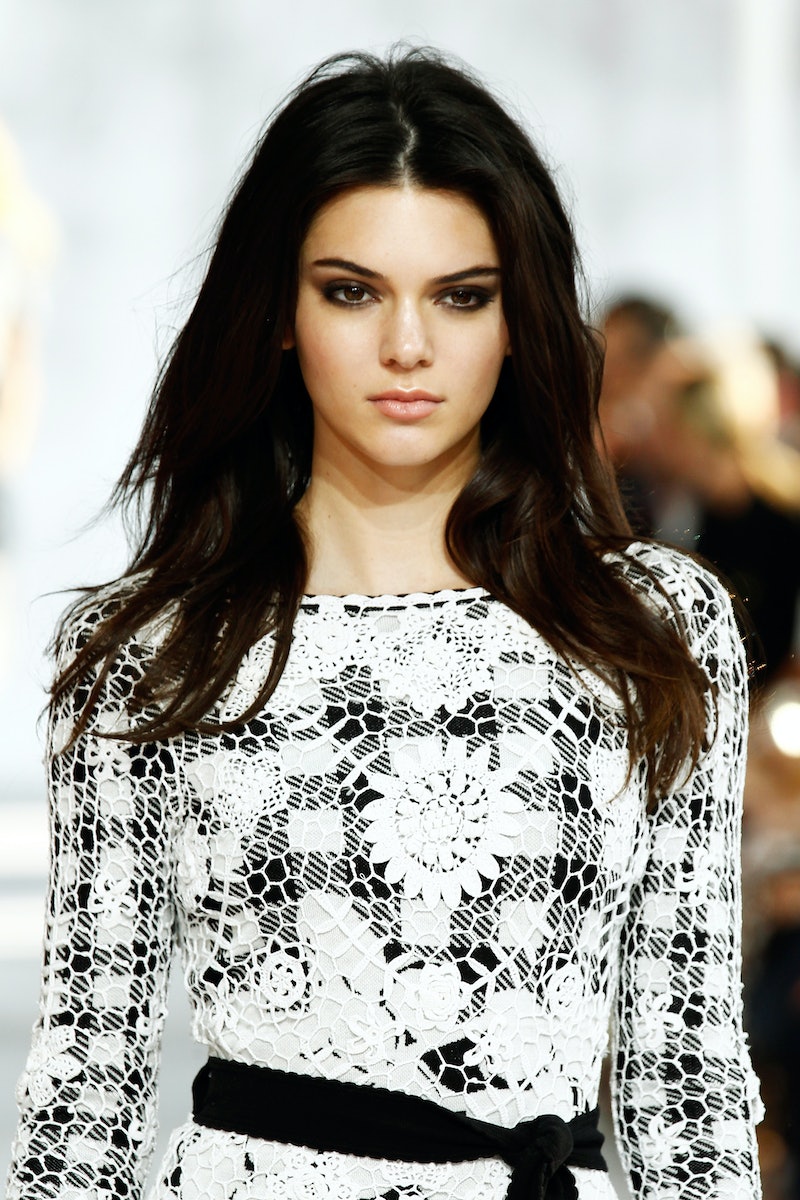 Kendall Jenner is clearly the coolest member of the Kardashian-Jenner clan. I know, I know. It isn’t nice to play family favorites, but facts are facts. It is only January and, while most of us are still feeling out what 2015 has to offer, Jenner has already landed her third consecutive Vogue spread, shot by none other than Patrick Demarchelier (whose name I can never say without immediately playing scenes from The Devil Wears Prada in my head), starred in a Marc Jacobs' spring campaign and debuted her first Estee Lauder spot as the new face of the brand. She was also recently labeled the “the girl of the moment” by Karl Lagerfeld. No big deal. Did I mention she is only 19?

Kendall — as it seems she is now only going by her first name — has also been met with a myriad of criticisms during her meteoric rise to supermodel fame, like when fellow model Arisce Wanzer bashed her and the reality star status she felt was the main driver behind Kendall’s modeling success. But last year, Kendall responded to all her haters, both the loud public ones like Wanzer and the quiet, relentless social media trolls, in the most epic way possible: With a reading from her very own burn book. In a short video for Dazed Magazine, Kendall read aloud some of the insults she has received about her looks, intelligence and career, Mean Girls style. I can’t think of a cooler way to handle the critics.

Don’t just take my word for it though. British GQ recently named Kendall Jenner the #1 Coolest Woman in the World, so they would obviously agree she is the coolest member of her family. Jenner topped a list of 20 majorly talented women — company that included the likes of Karlie Kloss, Jennifer Lawrence, Marion Cotillard, Kate Upton, Phoebe Philo, Emma Watson, Cara Delevigne and Kate Moss.

That is a serious group of women to be at the helm of. While I am sure there are plenty of cynics out there sounding off on how ridiculous it is that Kendall is the coolest, here are 15 fashion moments that completely support GQ's latest #1 ranking.

1. THAT TIME SHE WALKED CHANEL WITH CARA DELEVIGNE

She walked Chanel, hand in hand with her BFF — that other uber famous model everyone is talking about, Cara Delevigne — in matching hair bows. Is there anything cooler?

2. AND THAT TIME SHE REPPED A STRONG FEATHER GAME FOR CHANEL COUTURE

Oh yeah, looking like the Mockingjay in Chanel Couture is cooler.

3. THAT TIME SHE SUCCESSFULLY PULLED OFF THE DOUBLE JOLIE

Remember when Angelina Jolie pulled off the high slit heard round the world and her right leg became more famous that her entire self? Kendall's slit was even higher and was equal opportunity right and left leg. Whether you liked the fashion statement or not, you have to give the girl props for having the guts to even try and pull this one off.

4. THAT TIME SHE STOLE THE MARC JACOBS SHOW

It's nearly impossible for anyone to steal the show at Marc Jacobs besides Marc Jacobs. Yet, in what was arguably the big kick-off to her high fashion career, Kendall wore the sheerest of shirts on the Marc Jacobs runway, becoming the talk of the entire fashion week.

5. AND THAT TIME SHE EARNED A SPOT IN HIS SPRING CAMPAIGN

So, Marc Jacobs just can't get enough of you? You and your friends Karlie Kloss, Joan Smalls and Adriana Lima all transformed to nearly unrecognizable, militant versions of yourselves in the name of Marc? Yeah, that's a big deal.

6. THAT TIME SHE DECIDED TO GO BY ONLY HER FIRST NAME

Apparently, Kendall Jenner has decided to drop her famous last name and go by only her first. Just "Kendall" is a bold move and puts her in pretty cool company with the likes of Rihanna, Madonna, Iman and Twiggy, to name a few.

7. THAT TIME SHE LANDED A LAGERFELD CAMPAIGN

In case you hadn't heard, Kendall is #TeamKarl for the Karl Lagerfeld SS15 campaign. Just when you think she can't get bigger, Marc Jacobs and Karl Lagerfeld both join #TeamKendall in the same season.

8. THAT TIME SHE BECAME A SPOKESMODEL

2015 may be the year of Kendall (see, already working the singular referral into the vernacular), but 2014 was nothing for the 19-year old to shake a stick at. In November, fashion's "It Girl" was named the new face of Estee Lauder, a title previously bestowed on the likes of Hilary Rhoda, Gwyneth Paltrow and 13-year veteran Elizabeth Hurley.

9. THAT TIME SHE WAS LOVE'S TOPLESS AMERICAN GIRL

10. AND THAT TIME SHE STRADDLED CARA DELEVIGNE IN THE NAME OF LOVE

Once clearly wasn't enough, so LOVE invited Jenner back for a second cover shoot. Only this time is was with the only other industry powerhouse that could hold her own in the spotlight with Jenner, Cara Delevigne. The magazine knows a famous friendship when they see one and fame really does mean the ability to publicly and suggestively show your affection.

11. AND THOSE THREE TIMES SHE PLAYED SEXY SANTA FOR THE LOVE ADVENT CALENDAR

If there is anything the British fashion magazine is in love with (pun intended) it's Kendall Jenner. Each year they feature some heavy hitters from the industry in their advent calendar and this year Kendall repped three separate days on the countdown.

Kendall is a member of the Balmain Army. And she managed to upstage a leopard-clad, cinch-waisted Kim Kardashian. Nothing anyone does will ever be as cool as that.

13. THAT TIME SHE HAD NOT ONE, BUT TWO, SEPTEMBER ISSUE COVERS

Landing the cover of any September issue is life changing and career making. So, nbd that Kendall had not one, but two covers for Teen Vogue last September.

14. THAT TIME SHE HAD A TRIO OF DAZED COVERS

15. THE TIME SHE WORE MATCHING PAJAMAS WITH A TINY KARDASHIAN-DISICK TOT

For real, you guys. Above all else, what is cooler than a strong matching jammie game? Nothing.

Kendall is the real deal, folks. Even if you don't share British GQ's view that she is the coolest woman in the world, you have to give it up and say she is the leader of the modeling pack.