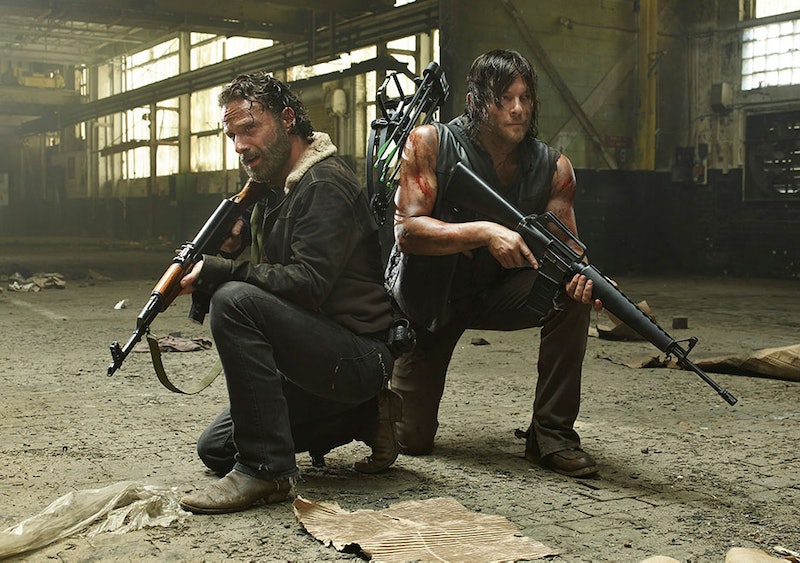 One thing about The Walking Deadseason 5 part 2 is certain: it's going to be batsh*t insane. As Andrew Lincoln tells Entertainment Weekly, forget everything you think you know and have come to expect about The Walking Dead, because season 5 is going to be "f***ing nuts" — which, coming from a show like this, is simultaneously exciting and terrifying, especially after the ending of last season. Lincoln, who plays Rick Grimes, says we should expect the unexpected:

It’s such a radically different show[...] I think that people have to be prepared for it. We also go very dark and then something different happens in the story which I think is going to breathe incredible new life further down the road for the show.

So, prepared for what exactly? What is this different thing that is happening in the story?! The first two minutes of the mid-season premiere don't hold anything we can call definitive answers other than the recurring flashes of light that could potentially indicate a journey into flashback territory this season, especially considering the upcoming spinoff — and Lincoln suggests the flashback theory might not be that far-off from the truth. "It’s almost like there’s a mini pilot episode in the middle of the season, " he says. Could that explain Lincoln's missing beard?

"I think it’s safe to say that something happens involving either a zombie makeover or I find a razor or an extended flashback." I'm going with the flashback. It's settled. Lincoln also shares that there will be substantial changes to the cast, and the way the cast carries the season. "I said it before: I don’t think it’s an ensemble anymore—it’s a show of leading actors."

That being said, it appears that the core of The Walking Dead — the bloody, zombie-infested core — will remain. Lincoln adds, "That’s our show. We always like to leave everybody in a great deal of pain [...] I’m really, really half terrified, half so excited to see how people view the way the story goes. I mean it’s completely uncompromising." Lincoln's right. What's The Walking Dead without the pain and utter horror of rabid zombie wasteland?