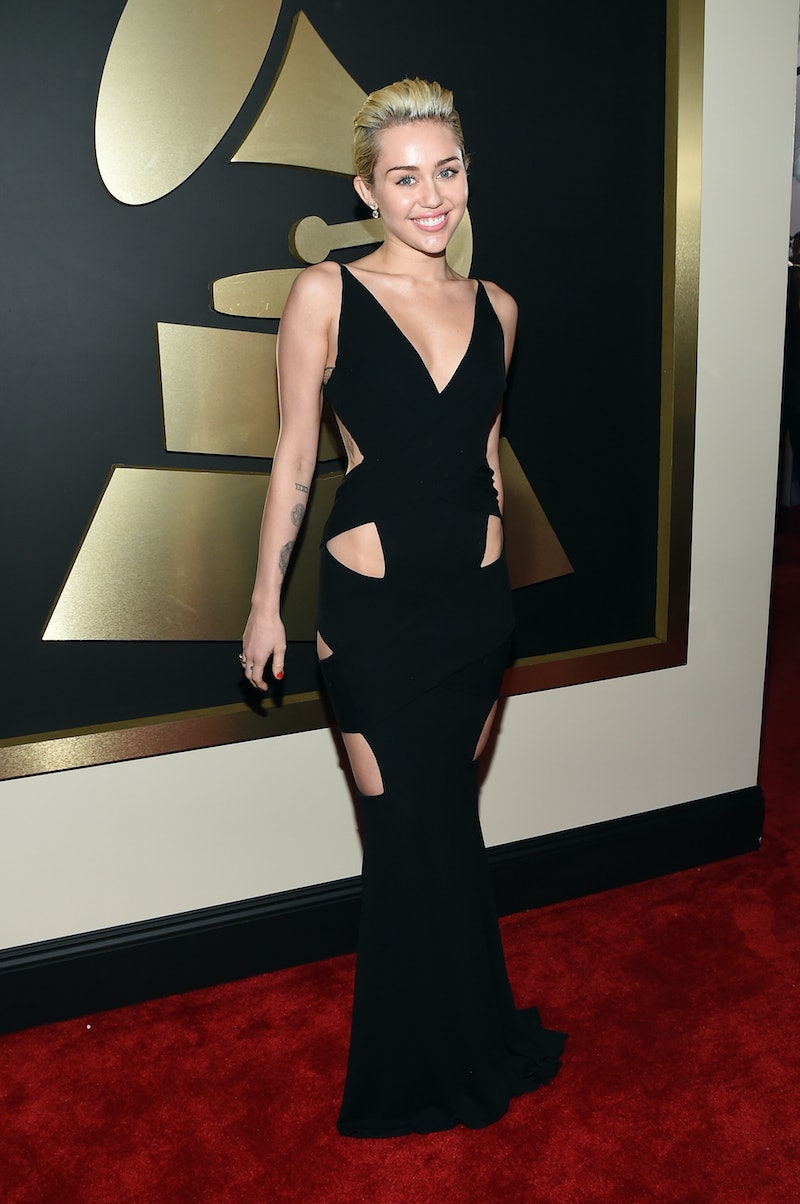 If there's one thing we can expect from Miley Cyrus, it's that the 22-year-old singer/songwriter/former Disney star gone experimental [pseudo] adult knows how to make an appearance. Whether dressed as a disco ball mermaid, a nonsense Muppet, in a unicorn onesie, or donning a purple side wig, she always dazzles, amazes, confuses and entertains. Say what you will about Miley, there's something awesome about her fearless attitude toward fashion. Sure, celebs get away with a lot more weird stuff when it comes to their clothes, but they also get critiqued a lot more publicly — and on a far more global scale. So being a risk-taker isn't without its, well, risks. At tonight's 57th annual Grammy Awards, Miley is nominated for Best Pop Vocal Album for Bangerz, and we've all been awaiting her red carpet appearance. Would she wear a holographic coordinate set with thigh-high gladiator sandals? Or how about a neon, psychedelic fur coat with a newly shaved head? The hypothesizing could be endless.

Judging by February 7th's Pre-Grammy Bash, the aforementioned hypothesizing could get a little conflicting. For her first official couple's outing with 21-year-old Patrick Schwarzenegger, Miley opted for an Alexandre Vauthier gown that perfectly blended the elegant with the sexy. The high slit was definitely very Miley, but the solid red and understated makeup made for an ultimately minimalist yet chic look. At tonight's awards, she's sporting a monochromatic black gown with waist, hip and thigh cut-outs, but there are no mermaid-unicorns to be seen. Miley looks, well, glamorous and [relatively] "modest." Respectable and kind of grown-up. In other words, very calm for Miley.

There's no telling what this means, really. Perhaps Miley's new relationship status is (for whatever reason) making her feel like she has to play a more adult role rather than the craycray twentysomething trying to prove a point via reindeer jumpsuits. Or perhaps she's just ready for a change. The reality is that Miley is, you know, human — and with that humanity comes style evolutions. If we all stayed the same, I'm pretty sure I'd personally still be wearing pinstripe skinny jeans with silver chains attached to the pockets and a peekaboo Ramones tee (with slits I cut out of it myself). I'm curious to see how Miley's style will continue to change. But I'm secretly hoping we haven't seen the end of those fake hillbilly teeth.