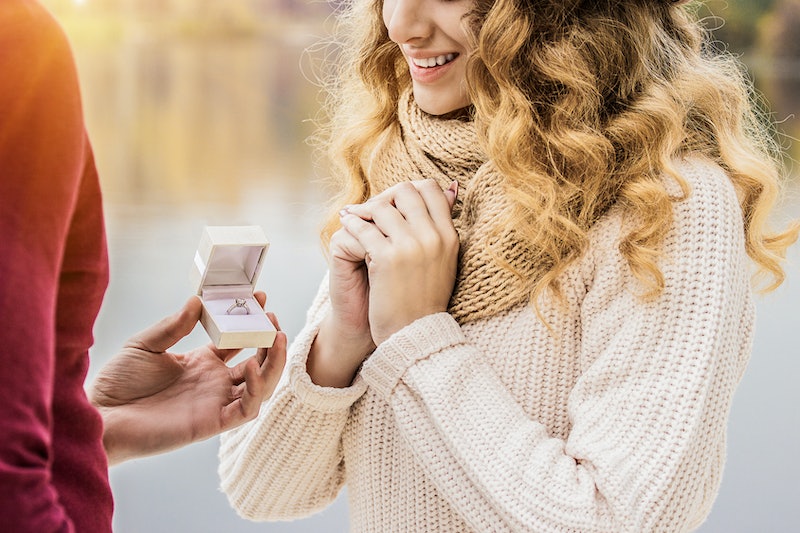 There are many ways that you can propose to someone. You can use heavy equipment, celebrities can chime in, or you can stage an elaborate ruse, but none of these bells and whistles guarantee that your proposal will end up with a “yes.” In fact, a new survey shows that a surprising amount of women are on the receiving end of multiple proposals in their lifetime and reveals how many women turn down marriage proposals.

The survey, conducted by the travel firm SuperBreak, asked 2,000 Brits about what they were looking for in a proposal, why they might turn one down, or if they were nervous to propose. It’s also worth noting that SuperBreak commissioned this survey as a way to advertise its services and try to entice more people to take their proposals to foreign destinations — so take all of this information with a grain of salt.

According to the survey, nearly one in four women has turned down a proposal, though apparently 23 percent of these women regret it. About 37 percent of women have been proposed to twice, while 12 percent of women reported that they have been proposed to at least three times, making my single self really reconsider my life choices. So why didn’t it work out for so many of these ladies? The main reason for rejecting a marriage offer was because the women didn’t feel as if their partner was the right one, followed by the relationship just not feeling right and not wanting to get married in general. Other reasons included that the women felt like they hadn’t been together long enough, the proposal was simply a way of getting back together, or the man wasn’t taking it seriously.

And you know what? It’s great that so many women are turning down proposals — it shows that women are confident about what they want and don’t want, and are willing to give up a relationship to find a partner, or lifestyle, that works best for them. So SuperBreak, even though your survey didn’t inspire me to purchase a destination proposal, it did make me feel awesome about how modern women view relationships...and isn't that so much better than simply selling a trip?

Just for fun, here are a few of our favorite proposals gone viral. Enjoy!

The Best Airport Proposal Yet

More like this
I Spent 2 Years Trying TikTok’s Dating Advice
By Kailynn Johnson
23 Super Sweet Things To Write In A Valentine's Day Card
By Karen Belz and Lexi Inks
Here’s What TikTok's "Mascara” Trend Is *Really* About
By El Hunt
The 3 Zodiac Signs Most Likely To Get Married Later In Life
By Kristine Fellizar
Get Even More From Bustle — Sign Up For The Newsletter
From hair trends to relationship advice, our daily newsletter has everything you need to sound like a person who’s on TikTok, even if you aren’t.