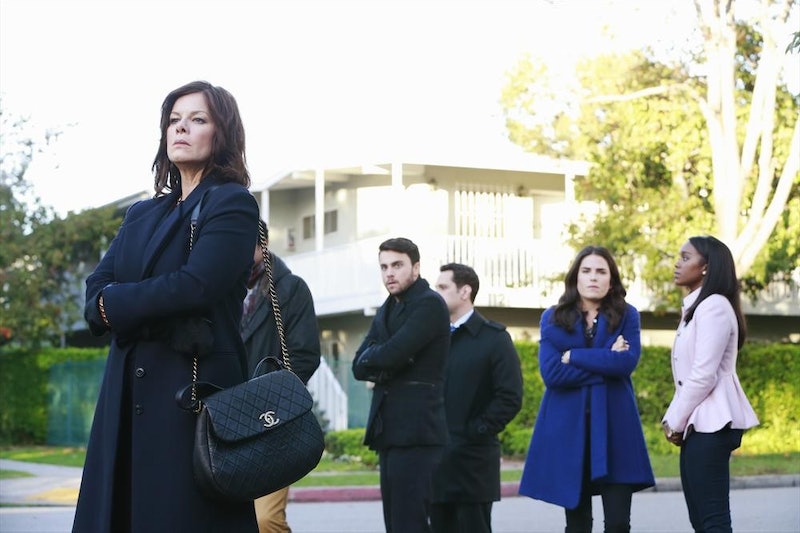 Fans of Shonda Rhimes' twisted legal thriller How To Get Away With Murder were likely shocked during last week's episode, "Best Christmas Ever," when the biggest threat to the Keating Four turned out not to be the arrival of Sam's sister Hannah (played by terrific guest star Marcia Gay Harden)... but the discovery of Sam's body. Although they thought they had disposed of his chopped-up, charred remains thoroughly, someone at the landfill found several trash bags filled with the missing professor. (Turns out everyone should have listened to Wes and put the bags in an incinerator rather than just throwing them all in one dumpster.) And now that Sam Keating has officially gone from "missing" to "murdered," the accusations are about to start flying. At least, that's what the title of this week's episode, "She's A Murderer," suggests.

But who exactly is the "she" that the episode's title is referring to? Could it be Rebecca, who was only recently cleared in the death of Lila Stangard? Might she fall under suspicion for killing the man who really killed her best friend? Could it be Hannah, who conveniently showed up in town right after Sam went "missing"? Might Annalise and/or the Keating Four try to pin Sam's murder on his own sister? Or could it be Annalise herself, who of course would be one of the prime suspects in the murder of her own cheating husband? That seems to be the likeliest scenario, given this promotional still from Thursday's episode:

You can practically hear Hannah screaming the hour's titular line in that photo, can't you? Despite last week's episode-ending detente between the sisters-in-law, it seems Hannah is not slow to point fingers at her dead brother's wife the instant she finds out he's dead. But what leads her to this point? What makes her think that Annalise had something to do with it when it seems last week that Annalise had convinced Hannah of her innocence? Unclear... And based on this sneak peek, Hannah isn't the only threat Annalise should be worried about:

Connor and Michaela seem worried that the discovery of Sam's body means Annalise is setting them up. How else to explain the discovery of one dismembered corpse amidst a sea of garbage, unless someone were told where to look? What if Connor decides that they think they need to do to save their own skin isn't to turn themselves in... but to turn on Annalise, and accuse her of the crime they committed? Could the Keating Four (or at least one or two of them) be about to join forces with Hannah and accuse their own professor or murderer?