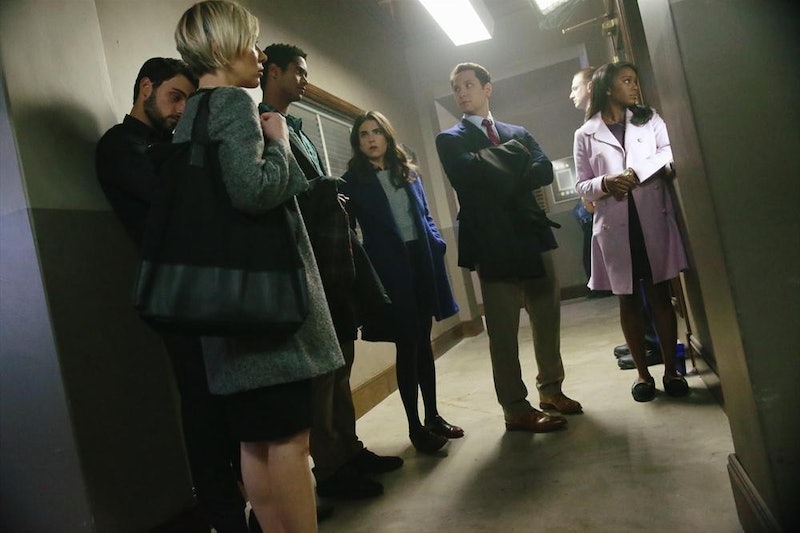 In the final moments of tonight's How To Get Away With Murder, the characters learned some inevitable, but still shocking news. Sam Keating's body was found on HTGAWM , so now what? It's not exactly a twist, but all the clever planning that Frank, Annalise, and four of the Keating Five have been doing has came to a head. It's all up in the air now that law enforcement is involved. Frank "stealing" Connor's car was a brilliant move, but this murder has not been smooth sailing otherwise.

Michaela's ring could be in one of those bags. Their alibis could fall apart. Somebody could easily get thrown under the bus. It was nice to see the kids dealing with what they've done in their own ways. We also finally, finally saw the trophy's scales for the first time since Sam's murder. Turns out, they're in Annalise's house near where Sam was murdered. That's not a great place for them to be. That's maybe the worst place for them to be. Plus, Hannah Keating (Sam's sister, played by Marcia Gay Harden) is putting together the pieces and saying what we've all been thinking — Sam did not necessarily kill Lila Stangard.

Don't think it's insignificant that Rudy, the former inhabitant of Wes' apartment, came back into the picture in this week's episode. Wes can't stop looking at the scratches above his bed, and the fact that a Christmas card from his Grandma arrived at his old address was mighty suspicious. Could he be the one that killed Lila? Maybe he was the Wes to Sam's Annalise, and the guilt caused his nervous breakdown. On the other hand — opening someone else's mail is a federal offense, Rebecca. Now is not the time to play fast and loose with the law.

Watch the promo for next week below. Are you as excited as I am to see how this plays out?