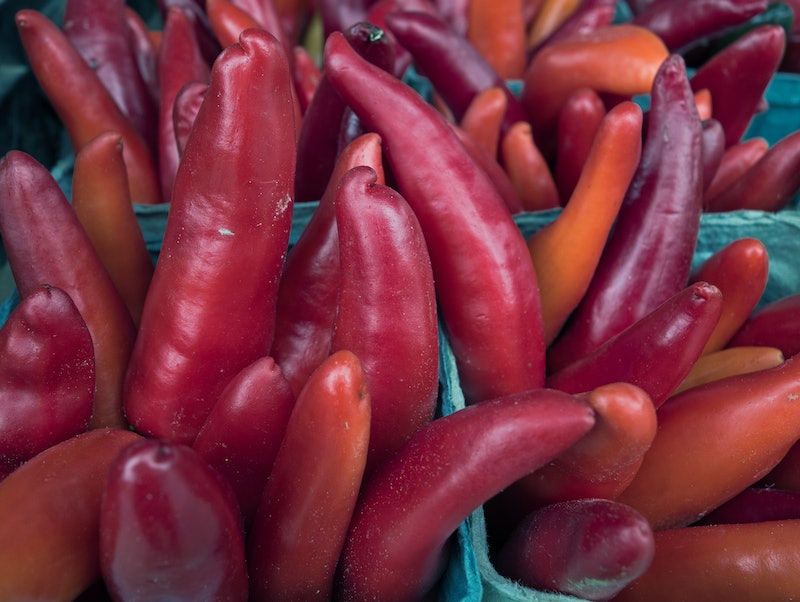 2015 has already brought us some interesting fads like pixelated hair, the bathrobe dress, and cut-out shoulders. The newest trend this year is just as strange, but is literally hotter than the rest — people are eating chili peppers to lose weight. According to research from the University of Wisconsin, capsaicin, the ingredient in chili peppers that makes them so hot, may help combat obesity, prevent weight gain, and manage weight. Apparently it generates heat production in cells and causes them to burn fat cells faster. Who knew?

While all these things might be true, the glaring question about the chili pepper diet is this: WHY? There are a million ways to lose weight, maintain a healthy weight, and exercise good living habits. Not only does it seem unnecessary to subject oneself to a food so unbearably spicy that most people can't consume it, but it actually turns out high concentrations of capsaicin can be toxic to the body; it is, after all, the main ingredient used in pepper spray. But hey, at least it's an excuse to eat more Sriracha, right?

But this isn't the first time people have subjected themselves to a silly, unnecessary, or even harmful diet. Here are four other less-than-ideal ways people have attempted to drop some pounds throughout history. Is anyone else questioning the intelligence of humanity?

This diet became popular in the United States in the 1900s, when people actually sold pills containing tapeworms. Once the little buggers got inside you, they would contaminate your system, eat the food in your stomach, and make you lose weight. Certainly, the tapeworm diet works... but it's also lethal. Not so good.

During the roaring '20s, when young people were reckless, rowdy, and just trying to have a good time, the cigarette diet became a popular way to lose weight, since cigarettes both curb your appetite and kill taste buds that make consuming food enjoyable. We now know, of course, that they're also detrimental to your health and cause all sorts of illnesses, cancers, and other health problems, which aren't exactly worth the single "benefit" of weight loss.

The Twinkie Diet was invented in the late 1930s. The theory was that since Twinkies only have 150 calories each, replacing your meals with these golden cakes of synthetic goodness would result in some dramatic weight loss — even if you had two per meal, you would still only be consuming 900 calories a day. Of course, if you only eat Twinkies, you're neglecting all of the actual nutrients the body needs to function, not to mention overloading your system with sugar.

This diet, which originated in the 1900s like the tapeworm diet, called for people to chew their food until it was "purified" and then spit out what remained. Yes, like a cow. Though it seems absurd, this diet at least has some research to vet it" Research shows that if you eat your food slowly and take the time to chew, you're more likely to eat less.