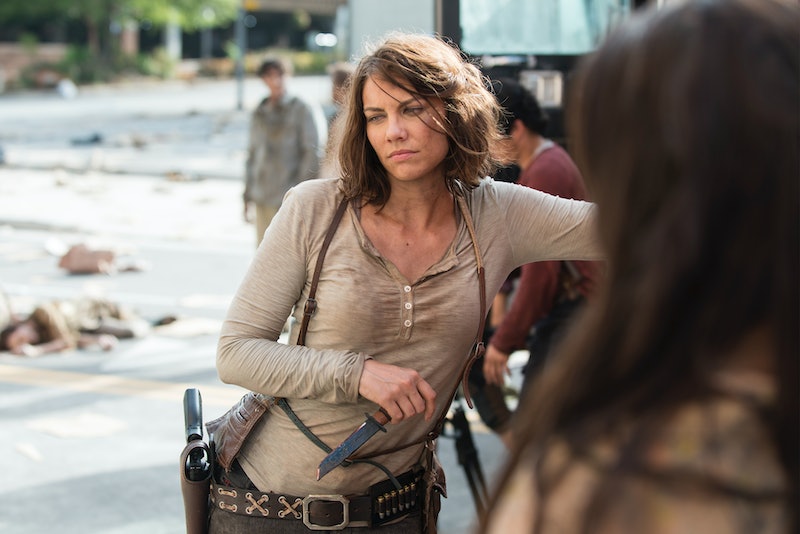 Well, we’re one episode in and already the second half of The Walking Dead Season 5 is already completely devastating. Thanks a lot Scott Gimple! However we have a lot to look forward to if the comics are any indicator of what’s coming up (major spoilers for The Walking Dead comics ahead). One major storyline we could see adapted from the comics is Maggie Greene getting pregnant. We don’t know for sure what’s going to happen, because the series' producers and writers tend to follow some characters' comic arcs and then go in completely random directions with others. But in The Walking Dead comic books, Maggie does indeed get pregnant and at this point in the comics, has actually already given birth.

Though many things are changed for the TV series, I'm very confident that this particular storyline will make it to the screen. In the comics, Maggie and Glenn conceive the baby after having been at Alexandria Safe-Zone for a bit, which we haven't seen yet on the show, so there is still a very good chance. Let's look at what happens in the comics so we know what to look out for on the show.

First, Carol's daughter Sophia (yes, of the zombie barn incident of 2011) is still alive in the comics, and Maggie basically adopts her. When Maggie and Glenn get to Alexandria Safe-Zone, with Sophia in tow, their relationship is very tense, because Maggie had recently tried to commit suicide and became severely depressed. But during their extended stay, they work through all of those issues, and towards the end of their time at the Safe-Zone, Maggie discovers that she's pregnant and tells Glenn.

Glenn then suggests that they go to Hilltop Colony, which brings its own set of problems, but let's not get into that right now. Maggie, Glenn, and Sophia head out for a new home for their growing family, and though I’m sure many of you know what happens next in the comics, I don’t want to spoil it for those who don’t. Instead, I'll just reveal that Maggie has a baby boy, who she names after her father, Hershel, which is the cutest thing to ever happen on Walking Dead besides Daryl Dixon’s face.

So when do I imagine all this going down on the TV version of The Walking Dead? Not in Season 5. Glenn and Maggie remain at the Safe-Zone for a pretty long time in the books, and since they haven't even found it yet on the show, if Maggie is going to get pregnant, we should have some time before it happens.