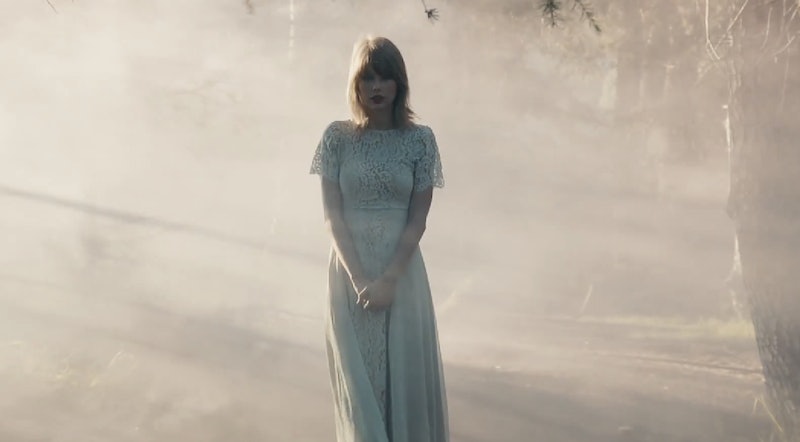 It's no secret that Taylor Swift wrote "Style" about Harry Styles. The name is a dead giveaway, and the reference to a James Dean-looking guy with "long hair, slicked back, white t-shirt" describes the One Direction heartthrob to a tee. (Pun intended.) Now that the "Style" music video is here, we have even more reasons to link it to Styles — especially since it references his paper airplane necklace that they were both spotted wearing during their short-lived relationship. The video's star, Vampire Academy's Dominic Sherwood, bares only a slight resemblance to Styles, and you could argue that he's just dressed in ripped jeans, a leather jacket, and a white shirt because that's how the song describes a guy. However, Swift is smart — she makes every decision very carefully, and I bet every little detail about her star is meant to somehow tie to Styles. In her cover story with Rolling Stone, she hinted that the song was about Styles, saying, "We should have just called it 'I'm Not Even Sorry.'

After watching the video a few times, I couldn't help but notice a few other ties to Swift and Styles' relationship. Below are six things it says about their short (but sweet) romance, and perhaps about their future together, too.

They Have Super Cute Memories Together

I would pay millions to see their blanket forts. They moved the furniture so they could dance, but did they also move it to make a sheet fortress?

But Those Come With Equally Bad Ones, Too

Sherwood is driving a car here — which references the line "he can't keep his wild eyes on the road" — but it could also be a nod to the snowmobile crash from "Out of the Woods."

Maybe They Did Get Out Of The Woods

But Their Relationship Was Always Fractured

This image of a shattered mirror could show that they always had issues breaking them apart, and her turning away while he faces forward hints they were never on the same page.

She Knows He Wrote Songs About Her

Yes, this could just be part of the video's theme, but Styles' song "I Love You" could be about Swift.

And She Can't Let Him Go Yet, Either

At the end of the day, she still physically holds a piece of him with this necklace. But is it close to her heart, or is she about to throw it on the ground and stomp on it? You tell me.