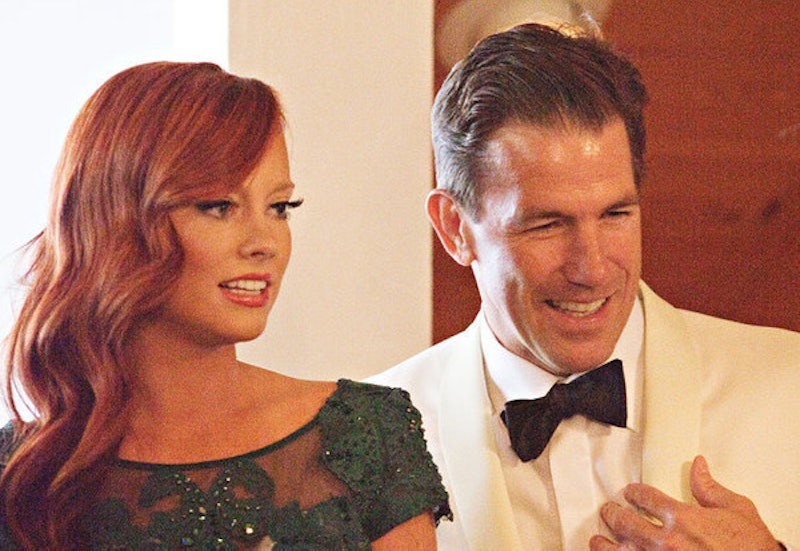 Oh, these two. This on-again, off-again couple is why reality television needs to exist. Southern Charm couple Thomas Ravenel and Kathryn Dennis have been going through a lot of drama this past year — some of it good (a baby!), some of it bad (assault charges!) — and we'll hopefully get to see it all unfold on Bravo's second season of Southern Charm. If you haven't caught the trailer for Southern Charm Season 2, I don't know what you're waiting for, as it looks like the situation between T-Rav and Dennis is going straight to Hell in a Vineyard Vines handbasket. But knowing that this was filmed back at the height of drama for the "couple" (?), it's fair to wonder what their deal is currently. Are the former Senate candidate-hopeful Thomas Ravenel and Kathryn Dennis still together?

Back in Oct. 2014, things got really messy for the couple. Allegations came out in the media that Ravenel had assaulted Dennis' hair dresser — Lauren Moser — by closing a door in her face and causing her to topple back down a flight of stairs. Those allegations were announced in Nov. 2014 to be unfounded, and any charges had been dismissed, according to Charleston police. Unfortunately, during the time, Ravenel felt that there was a lack of support from Dennis, and broke up with her, announcing the breakup on Facebook (because we're in middle school apparently, but I digress). What's sad about this entire situation is that the couple has a baby together — Kensington, born in March 2014 — who is surely shouldn't be involved in such a messy situation.

With all of that said, it appears that the couple might be taking it slow to make their relationship work. At the end of Nov. 2014, Dennis posted a photo of her and Ravenel together, which could point to a reconciliation between the pair.

Dennis also posted a photo of her and Ravenel in New York City during the holiday season, so if anything, it seems like they spent the holidays together! Yay for relationship progress, I suppose?

The couple hasn't posted much more together since the new year, but they're not the chattiest two people on social media at the same time, so it isn't necessarily a sign that they're not together. Whatever the status of their relationship is now, we can rest assured knowing that Season 2 is going to be full of T-Rav/Kathryn drama.