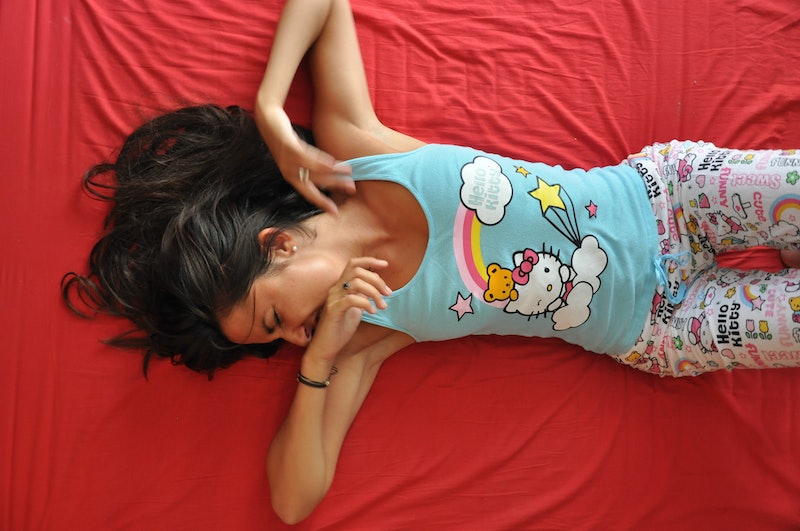 I have so much respect for those champions of Spring Break out there who not only survived the first half of the semester, but then sacrificed what little of their energy they had left to go out and party. At that point in my collegiate years, I couldn't even be bothered to reach for my laptop to order delivery pizza, let alone put pants on. But there so many of you guys were, getting glammed up and staying up later than I ever did. For me, "all nighter" meant staying up late to study or watch TV while consuming massive amount of junk food, and even then, I was asleep way before the party girls. Props where props are due. Maybe those party girls, with all of their commendable lack of laziness, will rule the world one day, whereas people like me, the non-party girls, will pretty much still be wanting to stay in our pajamas and go to bed at a reasonable time.

For those of us who were too sluggish to get up off the couch and were uninterested in party times, Spring Break was basically a synonym for Sleeping Marathon, especially if you go home to your parents' house for the week, although it can totally happen on vacation too. The only time I ever took a Spring Break trip, my two besties and I went down to Myrtle Beach, and being a bunch of squares, we were pretty much in bed by ten o'clock every night and were way more concerned with procuring junk food than we were with enjoying the night life (which, I've since learned, is only what lame, non-party people call it). If you are also a non-party person, you will probably recognize all of these Spring Break staples that we did instead:

Make mug cakes or some other super easy dessert

In an alternate universe, you were ambitious enough to make Pinterest recipes from scratch during your long days off from school. But this is the Spring Break universe—any real baking effort is just one more obstacle standing between you and immediate sugar gratification. Non-party girls become masters of lazy baking during Spring Break.

Does Spring Break even count if you haven't hit "Continue Watching" at least eleven times in the dark of night when Netflix tried to cut you off? (By the way, I really don't appreciate the passive-aggressive judgment associated with that question, "Are you still watching?" Of course I am, shut up, let me live.)

Party people are actually way more hygienic than we are, by virtue of them changing into party clothes at night and presumably showering at some point. Non-party girls are too far gone to be part of that routine anymore.

Create a small you-shaped crater in your mattress back home

Your bed at your parents' house obviously missed you so much while you were gone that it would be wrong to leave it, even for a second, so your refusal to get out of bed for the entirety of Spring Break is selfless when you think about it.

We love our friends. Just not enough to find a hairbrush.

Talk about how much studying you're going to get done

"I'm not even partying! I have so much time. Infinity plus time. Studying for calculus will be a breeze."

Usually by clicking through the pictures of friends who did go partying, or scrolling down into the infinite abyss of cute sweatpants we can buy online. (Ours are starting to smell.)

Accept that the studying isn't going to happen

I mean, you thought about doing it a lot, if that counts, maybe? You are apparently too irresponsible to handle free time.

Turn back into to your middle school self

I don't know what it is about Spring Break, but it was always the one week of the year something in me would snap and I'd reread all of the Harry Potter books, watch every Sailor Moon rerun I could get my hands on, and awaken my long-abandoned Gameboy to collect Pokémon I didn't even vaguely care about anymore. When you're home, the nostalgiapalooza is way too accessible. This also usually translates into me taking on other immature qualities of my middle school self, like yelling at my mom from the next room to bring me snacks, and being really insecure about...ugh, everything.

Watch Spring Breakers and live vicariously through it

Drink solely out of a boxed wine spout

If you are having a chill night with friends during Spring Break, this is the only feasible way to get your cheap college drank on and still pretend to be classy. "Pretend" is a really key word here.

Being away from your college friends even for a week feels like turning into Tom Hanks on that island. WHAT IS HAPPENING?! ARE THERE STILL PEOPLE HERE?!?!? WILSON! When all your friends are partying and you're still glued to the couch you especially need to find some evidence that they all still exist.

Chill with your parents

Sure, this happens partially because it's their television you're parked in front of, and television is a bond more universal and enduring than any other kind of parental love. But you also like them! It's fun! Pass the box of wine, Mommy!

Tear your entire closet to shreds

SO MANY CLOTHES YOU LEFT AT HOME, SO LITTLE TIME TO WEAR THEM ALL AT ONCE. Alternately, you will also find things you hate and since you have all this time you will decide to organize it, get bored, and then abandon the project at its peak messiness, just in time to run back to school and not deal with it until summer.

Bicker with your siblings

So much for all that collegiate wisdom and maturity you were supposed to come home with. Now that you're all under a roof again and you're with each other 24/7, it's basically high school all over again.

WHO IS THAT TERRIFYING BEAST?! Oh, right, it's you. Unshowered, greasy, feral, unapologetic you. Welp, back to the bed! That you-shaped hole isn't going to form itself!

These are the beautiful reminders that our drunk friends still love us even though we're too lazy to join them out in the real world doing normal, social, drunken college things. Bless their hearts. Maybe they'll come eat some mug cake and drink some box wine with you.