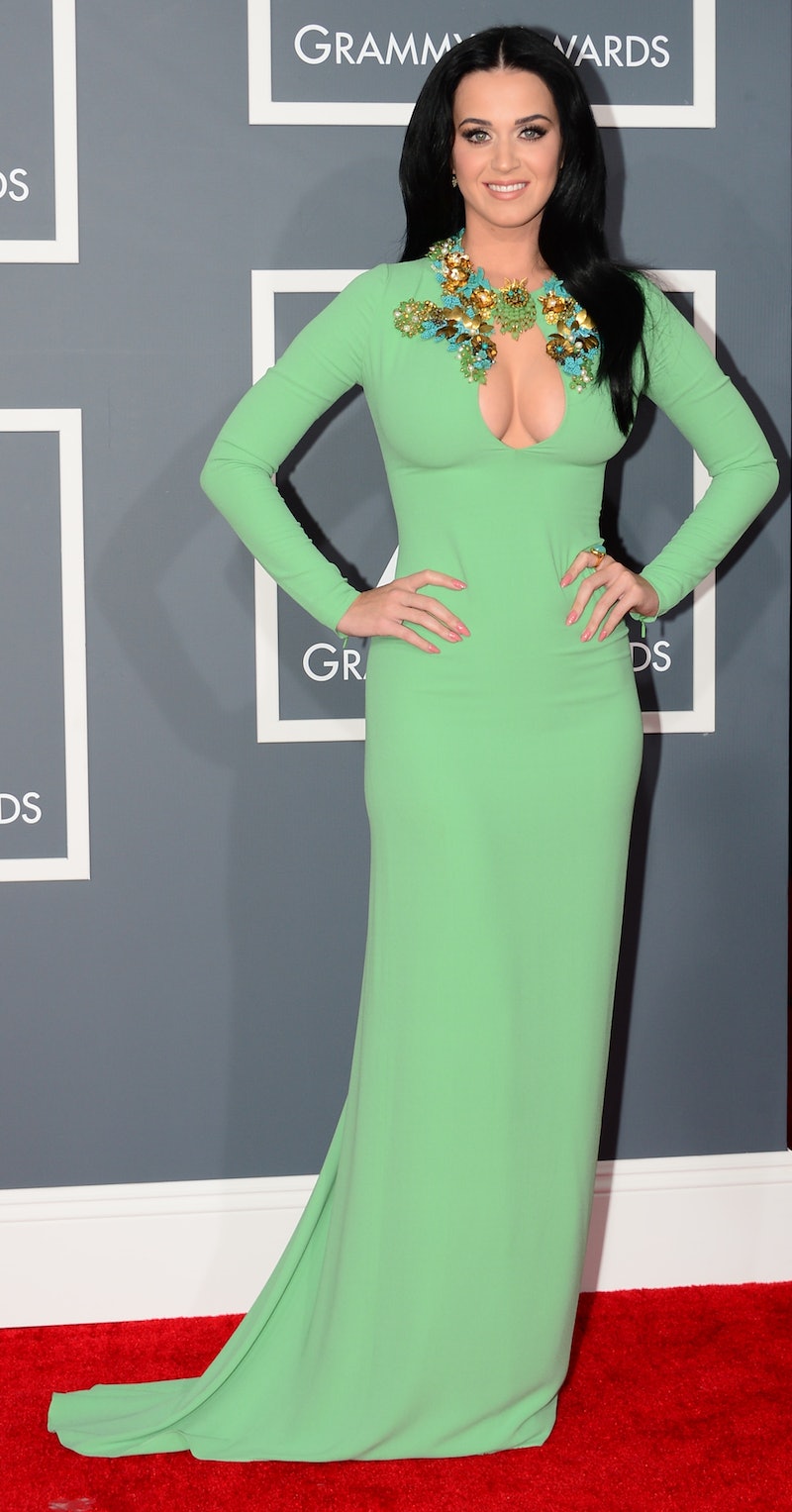 When questionable Photoshop practices make headlines, they are normally of one thing and one thing only: women in Hollywood altered to appear thinner. Or, you know, given bigger breasts, longer legs and in some cases, voided of genitalia. But, really, weight loss via Photoshop seems to be the go-to of some of the worst Photoshop fails — and to claim that this has nothing to do with the overarching image of aspirational beauty (of being slender) prevalent within our cultures would be pure absurdity at this point. Subsequently, these headlines are no longer surprising: When Mariah Carey is slimmed down several sizes or Kim K.'s booty diminished by a few inches, all shock factor is pretty much nonexistent. How about when the reverse happens, though? When celebrity women are Photoshopped to look bigger ? I'm not talking about when these women are turned into fat joke memes — but rather, when they are graphically metamorphosed into plus-size versions of themselves. This is what Spanish artist David Lopera has done — and for once, Photoshop headlines are beating to a different tune.

Lopera is a 20-year-old computer technician, garnering quite a bit of Internet fame as of late for his plus-size transformations of celebs like Kim Kardashian, Katy Perry, Iggy Azalea, Cobie Smulders, and Emma Watson, and even some fictional ladies, too — like The Little Mermaid's Ariel or Frozen's Elsa. Unlike artist Edull Ardo, known for drawing adorable plus-size Disney princesses from scratch, Lopera uses Photoshop to transform the bodies of these women into those of fat babes, in some cases giving them 100-pound makeovers. He told The Daily News that his goal is to show that plus-size women “can be beautiful too,” in the hopes of changing "people’s mind about beauty standards.” Whilst a part of me completely understands where he's coming from — because in case you missed it, body positivity is sort of my thang — I can't help but feel a bit hesitant when it comes to calling his endeavors a win for the size acceptance movement.

As someone who quite genuinely sees beauty in the fuller form, I'd be lying if I said I didn't find Lopera's work slightly fascinating. Though I don't condone arguably unethical Photoshop practices (that totally alter a subject's physical aesthetic or soulfulness), I'm not inherently opposed to Photoshop as an art form. There's so much that can be done with it when used carefully, respectfully and with a creative and innovative concept in mind, that it would be severely insulting to a whole myriad of humans out there who work in graphic design, illustration or as full-time artists of some capacity to say that we should just do away with the entire program.

That being said, Lopera's work is fascinating because of the scarcity of plus-size visibility. It feels empowering to see fat bodies in the mainstream, when so often we see none. Or when the ones that we do see are portrayed in such a way that adds to "comedic effect." But ultimately, his chosen mode of delivering this representation is resulting in even more manipulation of women's bodies — and if we're ever to achieve an era of fulfilled body positivity, that's something that needs to be removed from our sphere of acceptability.

In conversation with U.K. blogger and journalist Bethany Rutter of Arched Eyebrow, she told me:

"I think it's totally inappropriate for a thin man to be manipulating the image of women in this way. Yes, of course 'fat women can be beautiful too.' But there are loads of fat women making this point all over the internet, without instrumentalizing other women's bodies to do it. It shows the real problem is that there are next to no fat female celebrities that are portrayed as being attractive, so filling the public eye with beautiful fat women is the way to combat this. Not by manipulating the image of other women."

This is where the problems come from — from third parties who believe they have the right to transform a woman's body into something that it isn't (or a man's body, in some instances — although not nearly as often). The internet, like Rutter says, is in no kind of plus-size famine. Perhaps the media — as an overall entity — still is. But with all the plus-size and fat positive bloggers, models and activists posting real imagery meant to beat stigmatization, it seems unnecessary and almost disrespectful to turn to the altering of female celebrities in order to prove a point about body positivity.

Had Lopera curated a collection of images of these real women, his project would have perhaps been better received all around. As Lauren Ding from Pocket Rocket Fashion asked me, "Why has he done this campaign of making celebs fat — in what looks like gratuitous, pornographic ways — when there are so many actual fat women on the internet he could champion?" She goes on to add, "It's typical male privilege, though, not doing his research and presenting his own ideas like they're brand new even though fatties themselves have been doing their own advocacy for years!"

The thing is, I don't believe that Lopera's images were more pornographic or fetishizing than the majority of half naked imagery that we see of slender women every day (nor do I believe that fetishization is always a bad thing, because people's sexualities are their own, and even if we can't understand them, we should still be able to accept them provided no one is being harmed in the process). No one would bat an eyelash if Kylie Jenner was depicted in similarly tight or revealing fashion. No one would care — because we're used to seeing thin bodies in underwear, swimsuits or in nothing at all (hello, Sports Illustrated Swimsuit Issue). Lopera's choice in apparel (or lack thereof) here doesn't scream "misogyny" to me. And I do believe that his intentions were honorable. In the same Daily News interview, he told a reporter, "Look at my pictures and you will see that big is beautiful... but there are many people today who don’t agree with that... When they see my gorgeous, fat celebrities, I think they might realize how wrong they are."

I wish that it was as simple as that — because we need more projects aimed at promoting these ideals. Aimed at changing the way we perceive and understand constructs of beauty. But Ding's point that Lopera didn't take into consideration strides that the fat acceptance movement has already taken is completely valid. In the way that he presents himself and his project, it's clear that he cares quite deeply about spreading the "big is beautiful" mantra. But it's also clear that he sees a certain sense of revolutionariness to what he is doing — when, in the end, what he is doing is manipulating images of women... something that is pretty much the furthest thing from "revolutionary" just about ever.

I completely understand the desire for more fat celebrities to grace our televisions, films and daily intake of media. I truly do. But I don't think the way of getting there is by taking the thin celebrities that we do have, and posing the question, "What would they look like fat," or worse, "Wouldn't it be so much better if they were fat?" Fat acceptance and size acceptance movements have never been about proclaiming that everyone in this world should be fat, or should want to be fat. From day one, they've been about providing visibility to those who are fat, and are stigmatized, shamed and oppressed for it. When fat men and women take to the internet posting fatkini selfies or lingerie images or even inspiring nude photography, it's easy to feel strength and an overall sense of change in the air. And these are the images that need celebrating.

Blogger and writer Isha Reid of An Autumn's Grace told me:

"I can appreciate what David Lopera is trying to do here. Using women in the public eye and transforming them into plus-size women is certainly a way to show that women at any size can and are beautiful, but I wonder what the incentive is for those asking for these images. Is it just to see what a celebrity looks like fat? It is to make fun? If so, that's where the danger lies because then it isn't about enlightenment: It's about using the images as an excuse to body shame — which defeats the purpose in the first place."

Reid's sentiment that Lopera's intentions were positive and even good is one I can grasp — and one that I honestly believe as well. But there also exists this danger in adding weight to thin bodies via Photoshop. They're never going to look quite like natural fat bodies. There will always be a sense of caricature to those kinds of pictures (and usually some humor tied into that) because they just don't look quite right. Like all shapes and figures, part of what is beautiful about fat bodies is the versatility of them. No one's belly is quite the same. No one's curvature is quite the same. No one's waist-to-hip-to-love-handle ratios are ever quite the same. And the risk of Photoshop transformations (even those that possess all the good intentions of the world) is that they're not going to look genuine. And they're never going to look as beautiful as real flesh.

So while I hate to say it — because posing critical questions onto projects within the body-positivity sphere seems so counterintuitive — Lopera's project isn't really doing it for me. Fat women deserve to be seen. They deserve the right to have their bodies celebrated on their own terms, by whatever means they so choose. But too much has been fought for within size acceptance to turn away from the real people involved. There's no need to alter the images of thin celebrities as a contribution to body positivity, because that very altering is so not body positive (even if the women look beautiful fat; even if they don't — because those opinions are subjective). But there is a need for plus visibility. And luckily, there are a lot of actual fat women fighting for it across the world wide web. And in the everyday.

More like this
Most Comfortable Underwear For Big Butts
By Audrey Williams
The 5 Best Hair Ties For Thick Hair, According To Reviewers
By Jenny White
How Do I Deal With Both ED & Premature Ejaculation?
By Sophia Benoit
21 Photos Of Ben Affleck Holding Coffee, Cigarettes, Or J.Lo’s Hand
By Marina Watts
Get Even More From Bustle — Sign Up For The Newsletter