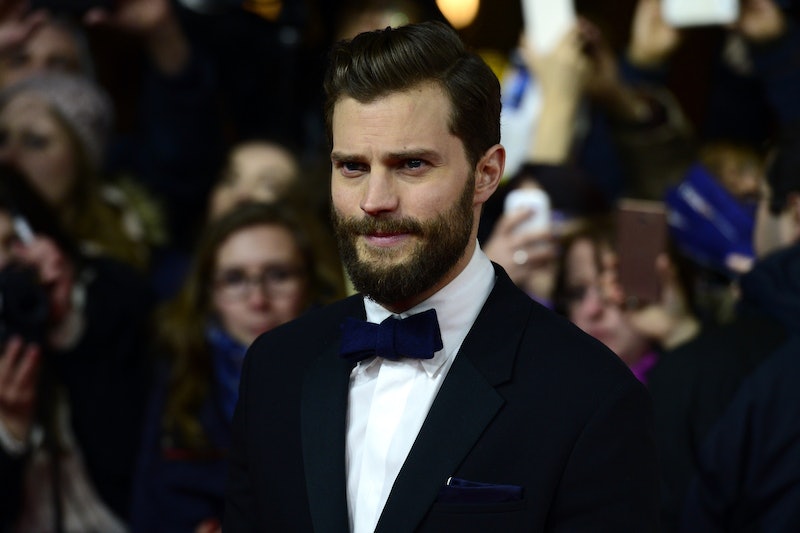 In the weeks leading up to the very highly anticipated release of Fifty Shades of Grey, Jamie Dornan and Dakota Johnson have been on a wild promotional tour. It's not like a film adaption of the best-selling book really needed any more promotion, but hey, it's all a really great reason to catch glimpses of the enchanting Dornan when he's not brooding in character as Christian Grey, right? Awards show season is coming to end and many fans of the book and film were excited to see that Dakota Johnson was announced as an Oscar presenter for the Feb. 22 ceremony and quickly, another question arose: will Jamie Dornan be at the Oscars this year?

Believe me, I'm not the only one to have immediately come to this very pertinent question. Being the stars of this box office phenomenon, the Dornan and Johnson have been pretty inseparable during their press tours, even amidst rumors that there is tension and lack of chemistry between them. This has definitely not warded off the fans who desperately want to see their Christian Grey and Anastasia Steele present together at the Oscars, but will the fan pleas be enough? Doesn't look likely, but we hope he surprises us.

I can only go by his awards show past and his upcoming schedule to try to come up with the most valid hypothesis. Johnson appeared on the red carpet at the SAG Awards, but there was no Dornan in sight. They were both announced as presenters for the Golden Globes, which they both did attend. I suppose there is still time to squeeze in some final presenters for the Oscars this upcoming Sunday, but chances are slim to none, since I assume he probably already declined because he won't be in L.A.

In the few days after the Feb. 12 London premiere of Fifty Shades of Grey, Dornan seems to have stayed behind in the U.K. to continue a press tour on his own. Johnson has been photographed in NYC this past week, appearing on American shows, while Dornan has made appearances on Heart Radio and the Graham Norton Show. Since he has a new baby girl and wife, Amelia Warner, that he probably hasn't seen that much of in the past few weeks, I venture to say that since he is on his home continent, he might be staying nearby now that the film is released.

Since we cannot know for certain where the next few days will take Mr. Dornan, I'll speak for the fans and say that there are plenty of reasons why he should totally be there. He obviously should be alongside Anastasia Steele on stage at Hollywood's biggest night, especially since he's got some pretty buzz-worthy films coming up soon. He also should be an emotional support for his ex-roommate and pal Eddie Redmayne who is up for the Best Actor award. Regardless of what happens, I think Dornan deserves a break at this point, and if fans (and screenwriter Kelly Marcel) have anything to say about it, Dornan could be receiving an Oscar nomination for himself very soon...