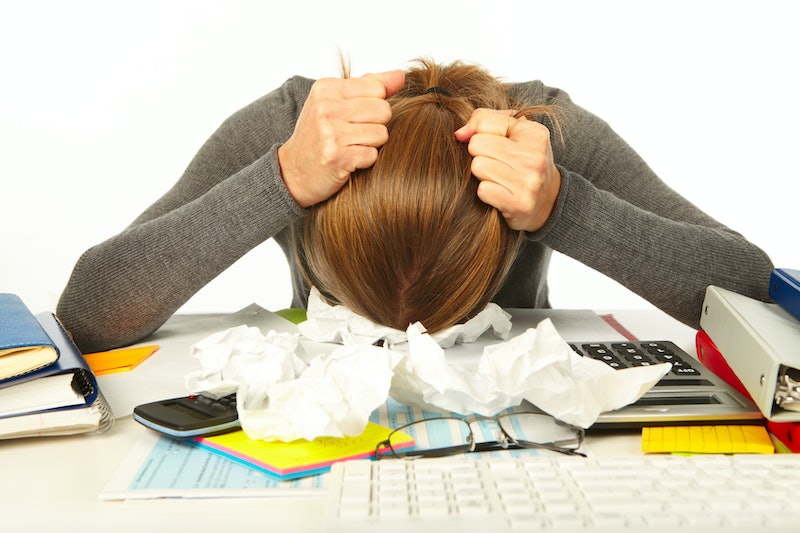 Pretty much everyone ever can agree that anxiety sucks. As if being an anxious person weren't bad enough, though, a new study published in the journal Anxiety, Stress & Coping just added insult to injury: The study found that anxious people are more likely to feel bullied at work. It turns out that not only is there a direct relationship between feeling victimized and overactive nerves, but moreover, anxiety might actually make people more prone to being bullied. This, in turn, leads to more anxiety which, in turn, leads to more anxiety — and thus the vicious cycle continues.

The study, which was led by Alfredo Rodriguez-Munoz at the University of East Anglia, surveyed 348 workers in Spain about their overall anxiety at work; then, six months later, they were asked the same set of questions again to gauge how their feelings had or hadn't changed. Rodriguez-Munoz and his team found that those who reported feeling more anxious in their first interview showed an increase in how bullied they felt at work in their second interview; additionally, those who said they felt easily pushed around in the first interview reported an increase in anxiety in the second. This data is relatively unsurprising, but not just due to the cyclical nature of the whole thing making it impossible to break free from the endless loop of work-related anxiety. The conclusion is also consistent with what you would expect: Anxiety causes people to feel crappy. Yuck, right?

It feels like with every new treatment or suggestion for dealing with anxiety, there's a also new study showing what else can cause that anxiety in the first place. These five other studies prove anxiety can strike anywhere at any time, which totally sucks. But hey, it's not all bad; even though there isn't a "cure," there are hundreds of ways to cope and contain it, including things like changing your perspective on anxiety, meditating or doing yoga, having sex, taking anti-anxiety medication, and seeing a therapist.

Just be on the lookout for these triggers, as well!

1. Anxiety medication can cause Alzheimer's, which will then give you more anxiety.

In research done in Canada, scientists found that in the five years following initial prescription of an anxiety medication, the risk in participants for Alzheimer's increased — especially if you take the medication in high doses.

Yet another horrible feedback loop was shown by neuroscientist David Linden, author of Touch: The Science of the Hand, Heart, and Mind. Linden noted that anxiety and pain are linked in a way that makes it seem like if you have one, you'll surely have the other — and if you have both it's impossible to escape.

3. Being away from your phone can give you anxiety.

Apparently your cognitive performance and "sense of extended self" can decrease drastically when you're away from your phone. It seems we're all psychologically addicted to our phones, and the absence from them can cause severe and substantial anxiety and distress.

4. Even sitting can cause anxiety. That's right, sitting.

Researchers found that people who sit for more than six hours a day (i.e. most people who work office jobs) are more likely to have moderate symptoms of anxiety or depression. NOWHERE IS SAFE.

5. Anxiety apparently makes you more prone to cheating during games.

In spite of all this, though, let's end on a positive note: A lot of things can make you anxious, and anxiousness can make you do a lot of things — but it's important to always take research studies with a grain of salt. Not everyone adheres to broad generalizations; while there are a million theories about anxiety and stress, only you can know what triggers yours and what makes it better. All you need to do is be proactive about it: Strategize, get help, whatever. It's going to be OK. I promise.