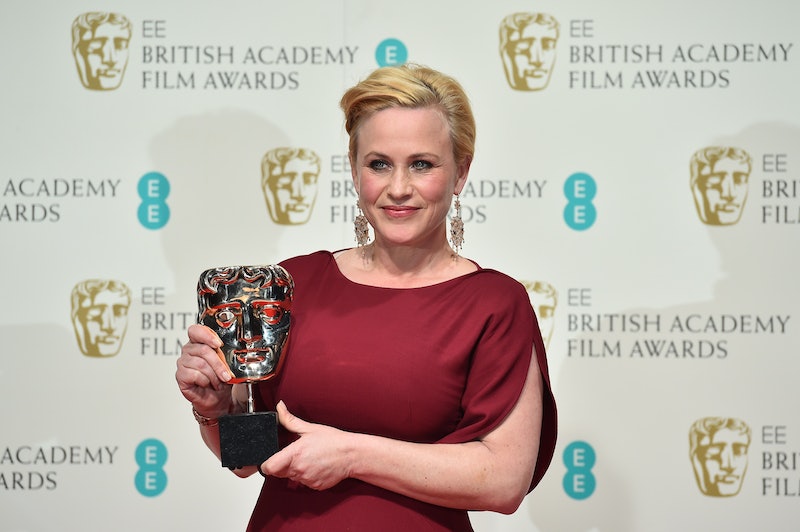 The Best Supporting Actress race for the 2015 Academy Awards is full of amazingly talented women — Laura Dern, Keira Knightley, Emma Stone, Meryl Streep, and Patricia Arquette — not a slacker in the group. If you were to pick the odd woman out, you may go for Arquette, but trust me, Boyhood star Arquette will win at the 2015 Oscars. Like the male counterpart award, Best Supporting Actor, both Arquette and J.K. Simmons have been sweeping their acting categories throughout this awards seasons. So expect the bespectacled, emotional, speech-reading Arquette to be up on that stage come Feb. 22, accepting the Academy Award for Best Supporting Actress.

I happen to be a fan of Boyhood and do love the ingenuity of Richard Linklater for following the actors in the film over the course of 12 years. (Uh, can Ellar Coltrane get some sort of award for giving up his childhood to play Mason? Man [err, or Boy?], is he lucky that 1. The film turned out so well and 2. He turned out to be a pretty decent actor.) Arquette portrayed Mason's intelligent mom (with a penchant for landing in relationships with crappy men) with subtlety. I wasn't blown away by Arquette's performance — but Boyhood really isn't the "blow you away" type of movie. The film is Hollywood documenting real-life and getting as close to it as it has ever come. Even seeing Arquette speak about the role of Mom (and the moments that we omit from our memories) is inspiring.

But regardless of what you thought of Boyhood or Arquette's performance, there is a reason that her winning the Best Supporting Actress award at the Oscars is so close to a sure thing. It all comes down to number crunching. Entertainment Weekly reported in their Feb. 20, 2015 print edition that Arquette has won for Boyhood at the following awards ceremonies: the Golden Globes, the British Academy of Film & Television Arts, the Critics' Choice, the N.Y. Film Critics, the Chicago Film Critics, the Los Angeles Film Critics (for lead actress), and the Screen Actors Guild. The latter is the most telling since EW stated that, "Over the past decade, the Screen Actors Guild has had a 80 percent success rate in predicting the Oscar winner in [the Supporting Actress] category." With odds like, it would be shocking if Arquette didn't win.

The Hollywood Reporter celebrated Throwback Thursday on Feb. 19 with a photo of Arquette and her then-husband Nicolas Cage at the 1996 Oscars — when Cage won Best Actor for Leaving Las Vegas. And now, almost 20 years later, Arquette stands a chance to go home with her own Oscar. Ah, that's what I love about the film industry. A certain role can bring a deserving actor or actress back into the limelight in a surprising way.I really have enjoyed the work of all five women in the Supporting Actress category (Stone being another standout). But at this point, Arquette should win that Oscar — it has been 12 years in the making.