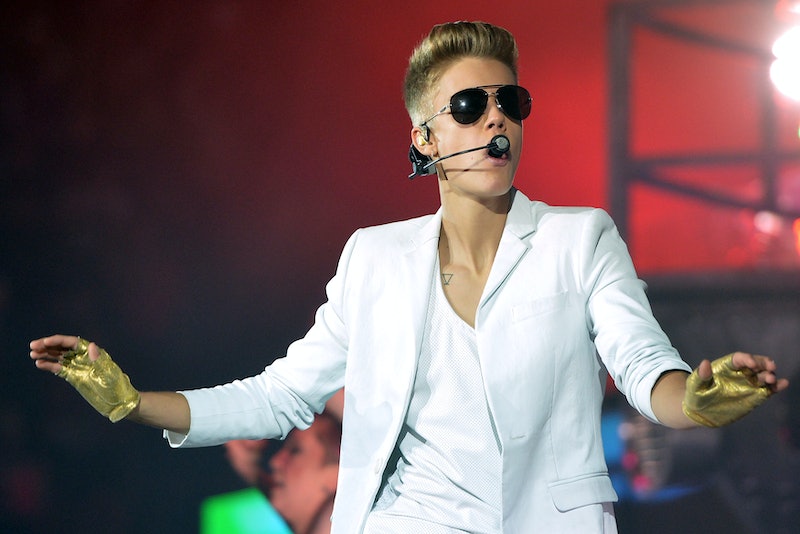 The comedienne continues to live my dream life. While he was appearing on The Ellen DeGeneres Show, Ellen DeGeneres scared Justin Bieber and it was pretty much the best thing ever — duh. FYI, DeGeneres has had Bieber on her show four (yes, four!) times in one month. Apparently, she just can't get enough of him. Anyway, during the singer's latest appearance, the talk show host decided to pull one of her famous pranks and scare her guest.

While chatting about Bieber's Comedy Central roast, DeGeneres presumed that Bieber must be scared about getting made fun of, ripped to shreds, and possibly being hit with eggs, as the promo shows (it's Egg-Gate all over again). Before the Biebs could even respond, a look-alike Bieber from his Calvin Klein ad jumped out of a table right next to real Bieber and scared the crap out of the singer. Yes, it's as amazing as it sounds. I don't know what it is, but watching people get scared, in addition to scaring others, is pure fun. It's even better when it's Justin Bieber.

His reaction is priceless, which means I'll be watching this on repeat all weekend. Thank you, Ellen.

Do you think this is how Bieber will react during his roast? Now, I don't know what will make him jump up and scream like that, but I have a feeling those roasting him will be brutal, so maybe he'll stand up, scream, and leave. I doubt that'll happen, seeing as Bieber seems super pumped about the roast.

With that said, Bieber's also said he's kind of scared about the roast. After finding out that Kevin Hart will host the special, Biebs tweeted, "This is gonna be good. #neverscared #kindascared lol @KevinHart4real @ComedyCentral #BieberRoast."

Let's just hope Bieber shows as much as emotion as he did when DeGeneres scared him, because it will make the event that much better. Also, if she could make an appearance and freak him out during the roast, that'd be amazing as well.