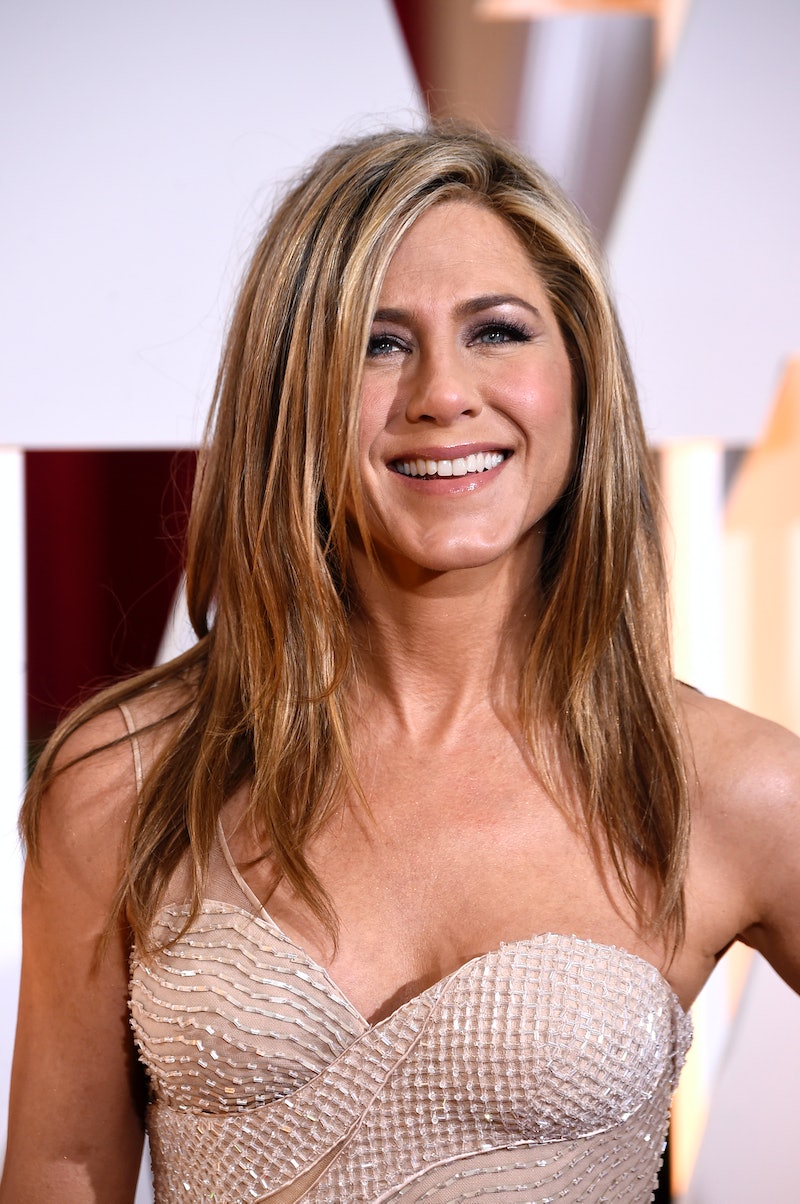 Jennifer Aniston is one of those celebrities whom you feel obligated to love — obligated to love because she played some kind of secondary role in your "growing up" stage, and I guess because she was sort of the leading lady of a show that everyone is supposed to have eternal respect for (for the record, I do not). But J. Aniston has also been the target of a lot of critique throughout her career (she's only human, after all), and amongst the reasons there has always been her style. I don't think anyone could really argue against the fact that Rachel Green is infinitely more stylish than Aniston, and that Jennifer really needs to step away from the black. Kudos were given when she wore plunging vintage Galliano to the SAG Awards, but it seems the moment was only fleeting. So what would she do tonight? At the most beloved and renowned award ceremony of award season? Would she keep it "classic" and ultimately boring (because she has not yet totally grasped the whole "classic without boring" thing) or would she channel a certain other Jennifer?

Well, at tonight's Academy Awards, J. An is wearing a nude Versace gown and living sort of in between my two predictions. The gown is not black (which makes it an interesting choice for the former Friends star). It even has a thigh slit, incredible sparkle detail and a bodycon silhouette that shows off her body impeccably. But I'm sort of at a loss. It feels like she tried — like she genuinely wanted to spice up her LBD routine and opt for something emblematic of a new Jennifer. A more confident, risk-taking, fashion-savvy kind of Jennifer. But instead, she just sort of looks very much the same. And the end result is — although pretty — just a bit lackluster.

I'm not one to police women's standards of dress. And in no way am I saying that Aniston looks anything less than beautiful, because the sheer impossibility of that statement makes me laugh. But I do wish she'd do something just a little different. It's hard for women in Hollywood (of any age) to deal with the constant scrutiny and the picking-apart of best and worst dressed lists. But maybe the true IDGAF moment will come when J. An wears something totally out of her comfort zone. And memorable for all. That being said, she was half of this leading-lady-combo tonight, and this photo pretty much wins the Oscars. So, there's that:

More like this
Remember When Benedict Cumberbatch Announced His Engagement In A Newspaper Ad?
By Hugh McIntyre
Doja Cat Wore Surrealist-Inspired Schiaparelli To The BBMAs
By Dominique Norman
Machine Gun Kelly Wore A $30K Diamond Mani To The BBMAs
By Paris Giles
How To Master Baby Braids, According To TikTok
By Tomi Otekunrin
Get Even More From Bustle — Sign Up For The Newsletter