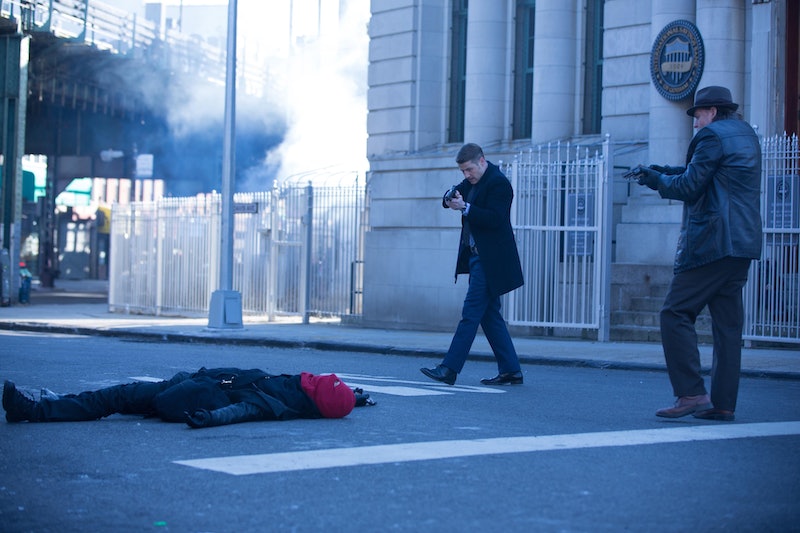 We're getting closer and closer to the big answers, everybody! Next week's episode of Gotham is titled "Red Hood" — who is that? In DC Comics, "Red Hood" is a title worn by Joker before he went mad. He was a lab worker with a plan to steal a particular sum of money and fell into a vat of chemicals. Last week, chemical weapons engineering was introduced to the series with young Bruce's meeting at Wayne Enterprises. This could be the episode that finally, finally tells us for certain who the Joker on Gotham is going to be. However, according to the TV Guide description of the upcoming episode "Red Hood," "Gordon and Bullock investigate the Red Hood gang following several bank robberies. Meanwhile, Selina Kyle continues to bond with Barbara; and Fish Mooney tries to reclaim her position in the underworld." So, it's not just one person?

The Red Hood starts as a gang in the comics too. They use the hood to keep the authorities guessing as to who is in charge. Perhaps the eventual Joker on Gotham is their leader now, or the underestimated Junior recruit? It's important to remember that The Joker is not the only character in Batman comics to go by the name "Red Hood," either. It could also refer to the vigilante Jason Todd. He also served some time as Batman's sidekick Robin. However, last week's episode just introduced Dick Grayson's parents. It would be strange of Gotham to introduce Todd, the second Robin, before the first Robin is even born.

However, this episode is likely to give us the closest clue about Batman's most infamous foe yet. Who could it be? Likely somebody we already know. There are so many rogues in Gotham that it's difficult to tell where the series is going with this, so let's take a look at some of the possibilities.

The boy we met last week at the circus, Jerome, so resembles the Joker that it seems likely he'll next take on the Hood. The young actor who played Jerome was clearly hired for his jaw shape and ability to laugh maniacally. However, I think he may have just served to teach Gordon a lesson about misogyny. Unless we learn that this kid has escaped custody and joined a street gang with a penchant for ban robberies, I can't see that he and the Red Hood will be connected so soon.

We should start going through our potential Joker rolodex, all the way back to the stand-up comedian in the pilot if we want to crack this. Remember the fence named Clyde? Selina took Bruce Wayne to go see him. He just goes to show you that the Underworld of Gothamis largely untapped. What about the bully that Bruce Wayne faced at school? He could have joined a street gang for kicks. The show is free to take liberties with the origin stories of its many characters. We could see some mixing and mashing before the Joker hits the scene.

I've said it before. We should not discount Butch Gilzean. Fish Mooney's right hand man has recently been brainwashed or "worked on" by Victor Zsasz. What if this "work" continues? What if he's playing them and is in control of his facilities, but the "work" has left some residual damage? Zsasz is also a potential candidate, especially if he has been treating Butch in a laboratory.