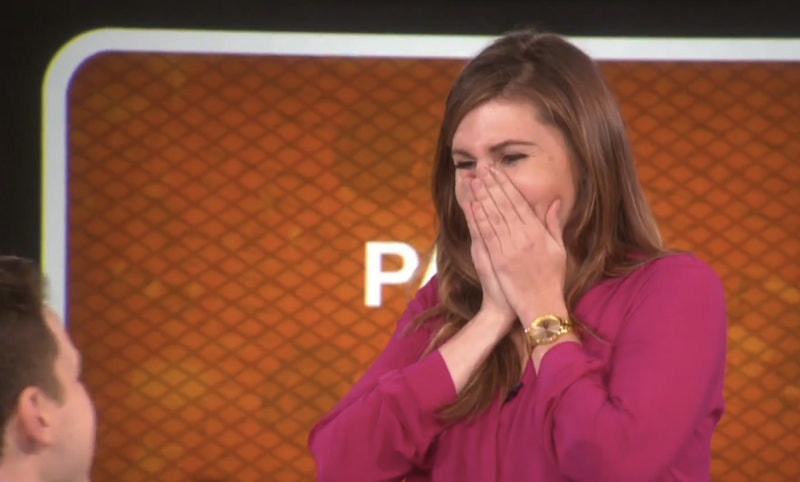 I know the words "public proposal" are two words that strike fear in a lot of people's hearts, but even as a cringe-prone person, I am willing to make exceptions for public proposals that are done right. Since flash mob proposals are getting a little tired and someone already stole the idea of proposing during Fifty Shades Of Grey, you've got to get a little creative these days if you're going to take a risk—which is exactly what this guy who proposed to his girlfriend on The Ellen Show did.

As adorable as this proposal idea is, really, the credit goes to his now-fiancée Jesse Tyler, who is so obsessed with Ellen that she not only sent letters on her behalf, but letters on her boyfriend and even grandma's behalf trying to get tickets to the show. This is one woman who does NOT give up easily (although it's freaking Ellen Degeneres; I could write an entire CD of songs about my obsession with her and only crack the surface of her awesome, so I can't really blame this lady). Jesse thought she was living her television talk show dream, getting a platform to advocate for the humane society she works at in San Diego and playing the popular Ellen game "Heads Up!" Little did she know that boyfriend Johnny King had a surprise in store.

The game the couple plays on the show, which sets the pretense for the proposal, is basically Charades on an iPad. Of course, the wonderfully nervous boyfriend eventually gets down on one knee, and I can honestly say I have never seen someone more romantically drop an iPad than I did during this clip. My favorite kind of proposals are the ones where the couple is just so freaking in love that nobody actually asks the other one to marry them and nobody says "yes" because they're already making out and crying, and now I'M crying so HAPPY WEDNESDAY, EVERYONE, GET READY TO GET YOUR HEART SQUISHED.

Now all this upcoming wedding needs is an adorable animal jamboree and EllenDJing and we're all set: