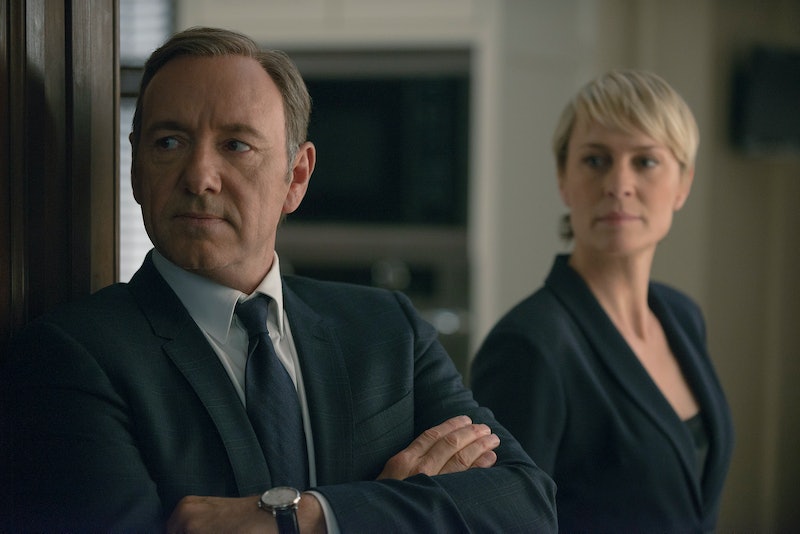 All 13 hotly-anticipated episodes of Season 3 of Netflix's flagship original series House Of Cards drop this Friday, which means it's almost time for more political intrigue, Machiavellian power plays... and murrderrr. Throughout Season 1 of the Kevin Spacey-starring thriller, viewers got to know House Majority Whip Frank Underwood and his loyal, cunning wife Claire. After incumbent president Garrett Walker passed Frank over for a promised post as Secretary of State, Frank and Claire enacted an elaborate scheme to remove the Vice President from power so Frank could take his place one heartbeat away from the Presidency.

There were more than a few casualties along the way: reputations were tarnished, egos were bruised, and — in the case of gullible alcoholic Congressman Peter Russo — lives were literally lost. But the unscrupulous Underwoods didn't let that stop them, and they entered Season 2 victorious... the only threat that of young journalist Zoe Barnes, who was starting to piece together just how dangerous her source/lover really was.

Of course, a man like Frank isn't content to remain second-best when he could be the best — so Season 2 focused on Vice President Underwood's efforts to undermine his "friend" and boss President Walker. Before you dive into your binge of Season 3's thirteen new episodes, here's the run-down of exactly what happened in Chapters 14-26:

Interestingly, Frank's main adversary in attaining the Presidency wasn't Garrett Walker himself, but the Commander in Chief's personal friend and political ally, billionaire Raymond Tusk. Although Tusk is the one who vouched for Frank as Walker's VP pick in Season 1, the two egomaniacal men quickly butted heads in Season 2 over complicated back-channel deals with the Chinese.

Eventually Frank was able to turn Walker and Tusk against each other, isolating the President in a time when he needed allies the most. The most powerful man in the world was facing the most mundane of difficulties: marital problems. First Lady Patricia found herself ill-suited to her position and resentful of her husband's busy schedule. Claire was able to talk Patricia and Garrett into attending therapy... and when their therapy sessions were exposed to the public — as well as the fact that Garrett was taking medicine the therapist and prescribed to his wife — the public's trust in their President was shattered.

This was the last straw for an embattled Garrett, as he was already facing impeachment over claims of a money laundering scheme with the Chinese. Faced with more than he could handle, Garrett finally stepped down... and Frank was sworn in as President of the United States.

When she wasn't helping her husband scheme her way to the top, Claire was handling plenty of problems of her own. First she had to do away with an irritating lawsuit brought against her by her former partner in the Clean Water Initiative, Gillian, who was claiming she was fired for being pregnant. Claire disposed of this threat by signing the entire CWI over to Gillian and leaving it all behind.

Her time freed up, Claire focused instead on drafting a bill pertaining to rape in the military — an issue that became paramount to her after she confessed live in an on-air interview that she had been raped in college by General Dalton McGinnis. (While the rape was true, the reason she admitted it — to cover up the fact that she'd had an abortion — was a fabrication.) At first, she worked with Frank's replacement as Whip, Jackie Sharp, to craft the legislation, but the two women found themselves at loggerheads over the bill and wound up bitter enemies.

Claire was forced to heal her relationship with Jackie by dropping the bill, leading Megan, the young woman who had been helping spearhead the project (who had also been raped by McGinnis), to attempt suicide. Claire showed an unusual amount of remorse of this regrettable turn of events, crying quietly by herself after visiting Megan.

Frank's most loyal confidante, his Chief of Staff, spent most of the season in a tumultuous relationship with Rachel Posner, the former call girl Doug had used to set up Peter Russo's downfall in Season 1. Lest anyone find out that he and Frank were behind Russo's spectacular meltdown and subsequent death, Doug was forced to hide Rachel away. The young girl chafed at her confinement, bonding and eventually falling in love with Lisa, who worked at a local church. Threatened by Doug, Rachel was forced to break off this relationship. Then, afraid she was about to be discovered, Doug ordered Rachel to pack up her stuff and started driving her somewhere. Rachel panicked, thinking her captor was about to kill her, and ran off into the woods. When Doug came looking for her, she hit him in the head several times with a large rock and left him for dead.

Frank hand-picked this former war hero to replace him as House Majority Whip. She proved just as ruthless at keeping her party in line as Frank before her, even ruining the life of her father figure in Congress to gain the post. She was perhaps even more of a handful than Frank bargained for, defying him more than once and refusing to budge on Claire's bill. But in the end, Frank was able to get Jackie on his side to help bring down President Walker, convincing her that if they didn't vote for impeachment, it would ruin the Democrats' chances at the midterm elections.

Before Frank could deal with Walker and Tusk, he first had to dispose of those pesky journalists who were threatening to expose the truth about the murder of Peter Russo. In the show's most shocking twist, he killed his former lover Zoe Barnes in the opening hour of the season, pushing her in front of an oncoming subway train. Zoe's death sent veteran reporter Janine Skorsky into hiding and Zoe's former colleague Lucas Goodwin on a path to vengeance. But poor Lucas didn't stand a chance against the Underwoods. Stamper orchestrated an elaborate trap for the journalist, involving a hacker in the employ of the FBI named Gavin Orsay (and his pet guinea pig Cashew). Lucas was arrested for cyber terrorism, and will likely spend the rest of his life in prison.