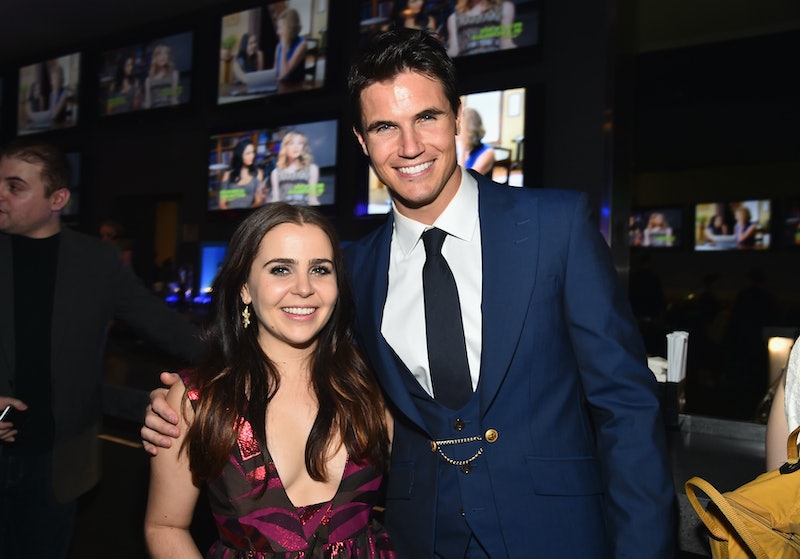 If you haven't seen The DUFF , go out and see it right now. Not only is it a hilarious and heartwarming movie about embracing who you are, but it also stars Mae Whitman and Robbie Amell, who have the best friendship chemistry that I've seen in years — both on and off screen. (The romantic stuff in the movie is cute too, but in real life, he's engaged to Italia Ricci from Chasing Life and Whitman has a boyfriend, so let's stick to besties.)

In the film, they don't start off as pals — he's the one who calls her a DUFF, a.k.a. "designated ugly fat friend," first — but as they help each other discover their true selves and find confidence in who they are, their BFF status blossoms. Offscreen, they were fast friends, too, Amell told me during our chat about The DUFF . "Right off the bat we kind of hit it off. I’ve been a big fan of Mae’s for a while and I think she’s so funny and witty and sarcastic," Amell said. "I was just trying to keep up with her the whole time. We had a lot of fun." Whitman has been as open about her adoration for her co-star, sharing her love in an Instagram caption: "A quick note to say thank you to this guy, my best friend and partner for all things DUFF, for being such a gentleman and a scholar — but mostly for letting me touch his abs at photo shoots."

There's much more love where that came from. See 12 of the reasons why Whitman and Amell have given us new friendship goals below.

1. They Help Each Other Look Good

The best glam squad ever.

2. They One-Up Each Other With Compliments

In response to Whitman's Instagram post, Amell wrote, "There's no one who could have done what you did in this movie. It was an absolute pleasure. You're the best. Also I just sent you 47 edible arrangements. Enjoy."

4. They Help Each Other In Tough Situations

Amell is a real-life superhero.

6. They Try To Get On Each Other's Shows

Well, Amell tried to get Whitman on Arrow, his cousin Stephen's show, and she attempted to get him on Parenthood before it ended.

7. They Act Out Nick Jonas' "Jealous" In Real Life

Amell's fiancee, Italia Ricci, and Whitman are in love in real life, guys.

8. They Call Each Other Out For Fun

And Amell comes to the rescue again.

9. They Send Each Other Amazing Videos

10. They Tell Each Other Taylor Swift Pick-Up Lines

This one was staged, but it's still hilarious and amazing. Skip to the 3:20 mark!

These behind-the-scenes bloopers are out of control.

12. C'mon, They're Adorable Together