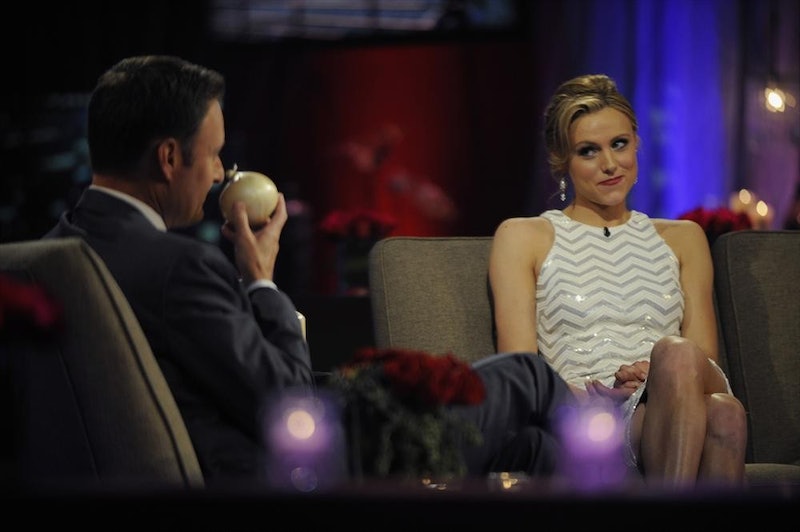 This season of Chris Soules' farm-tastic journey on The Bachelor has been full of drama, crying, panic attacks, jealousy, and everything else ugly about dating 25 women at a time on reality television. There has been a wide range of women on the show, but the most common label this season has been "crazy," especially for The Bachelor's Kelsey & Ashley S. The idea of calling women on reality television "crazy" seems to be the most destructive. Which is why I hope that the show, Chris Harrison, and Chris Soules all stop referring to certain women on the show with that word (or a variety of others like it) while the show takes one final lap before the finale.

This season, it seems instability was the show's main theme, if we focus on where the Bachelor editors were driving our attention. There was Ashley I. (Lashley, as I've come to call her), the woman who was a virgin and who cried a lot on camera... about everything. There was also Ashley S., the woman who was made out to be mentally unstable; "insane" has even been used to describe her. Then there was Kelsey, the woman who told her "amazing" story about her late husband, who was made to look like a complete villain. And yeah, the word "crazy" has been thrown her direction too.

Look: These women don't just show up off the street. You can bet that the casting of The Bachelor includes a lot of screening, interviews, and background checks (the producers have to know the dirt before they cast you, obviously). In fact, Sean Lowe claims in his book For The Right Reasons that contestants are put through rigorous mental evaluations before they are put on television. The show's producers knows what they are doing while casting, and they are even more knowing of what they're doing while they piece together scenes for air.

One argument that we've heard from past contestants and fans is that we're not really seeing the real personalities of the women on the show. Ashley I. appeared on Jimmy Kimmel Live after being sent home and after the show made her appear to be an overly emotional woman ("I cried a lot," she admitted to Kimmel). During her appearance on the late-night show, she seemed like your average adult woman who can joke about her constant water works on The Bachelor. Why was there such a difference? Likely because we saw the worst moments of Ashley I. on The Bachelor brought on by the fact that these women are living in a petri dish of emotion; when Ashley I. was allowed to return to real life, the craziness of her environment was stripped away along with all the crying. Don't be mistaken: The environment of The Bachelor is crazy, not the women on The Bachelor.

Of course, after the episode when Kelsey Poe called her story "amazing" aired, the Internet erupted with calling her a sociopath (insane person, psychopath, etc. — just pick any insult, really). And while you're allowed an opinion about the situation, Kelsey's sister took to Kelsey's Facebook page to defend her sister. She said that only part of the footage had been shown, and that Kelsey absolutely didn't mean that her husband dying was amazing. Sister Poe, Kelsey was referring to going through such trauma and rising back up to being the strong woman she is today — that's what she was referencing as "amazing." The producers know how to manipulate and chop up a clip to get the maximum response from their loyal audience. Would people be tweeting about Kelsey saying how amazing it is that she was able to move on after such a traumatic experience? Probably not. Would people be tweeting about Kelsey saying her story (which we're left to assume is her husband dying) is "amazing"? Absolutely.

But there's more. The show also encourages the women that appear on it to be memorable — no one wants a boring cast. Let's be real here: There are probably a handful of women (and men) that go on The Bachelor or Bachelorette when they're not actually looking for love. There are almost certainly a few looking for a little camera time and a smidge of fame. It's very possible that there is encouragement from the producers on the other side of the cameras to act goofy (See: Ashley "Onion Lover" S., who is an actress in real life). The possibilities for a fame-hungry person are endless, really:

No one is getting screen time if they're boring; that's why we don't remember the girls who get sent home first. This show is built to encourage contestants to flail about for attention and then they're rewarded with the destructive "crazy" label. It's simply not OK.

We're not even using the term for what we really mean. In most cases, all we really mean that the person in question has a unique personality or did something we're surprised to see on television. Sure, "she's crazy" is an expression that can be used in good fun, but when it is used in a way that the show has allowed, we're really insinuating that these women have mental issues. Heck, Chris Harrison himself even used the phrase to imply that Ashley S. was "mentally unstable" during Chris Tells All, rather than using it to mean "She's crazy, LOL" like you might say about your friend who skinny dipped last weekend. Maybe they do; maybe they don't. But if they do, should we be laughing or using it as entertainment? If they don't, let me tell you a little story about how "reality" TV isn't always as real as it seems: Their "crazy" is absolutely the product of staging, editing, and the setting itself.

And oh what a ridiculous bubble they live in. Between Courtney Roberts' tell-all book, Lowe's book, and Sharleen Joynt's Bachelor blog, we've learned that The Bachelor and Bachelorette involve extremely late nights (just look at the way that the sun was rising as Chris Soules cut his first batch of women this season) and lots and lots of alcohol without the requisite snack pairing (who doesn't give you snacks with an open bar? I mean really). How anyone can stay mentally aware and comfortable during all of that? Anyone would look crazy in that environment.

But beyond the conditions on The Bacheloror the magic of editing, the idea that women are crazy on reality television has become such a trope and crutch of TV for years now. And you know what? It's getting old. Let's come up with a new way to edit women for TV, or, here's a "crazy" idea: Let's let them be shown the way they really are and leave the insulting words out of it.