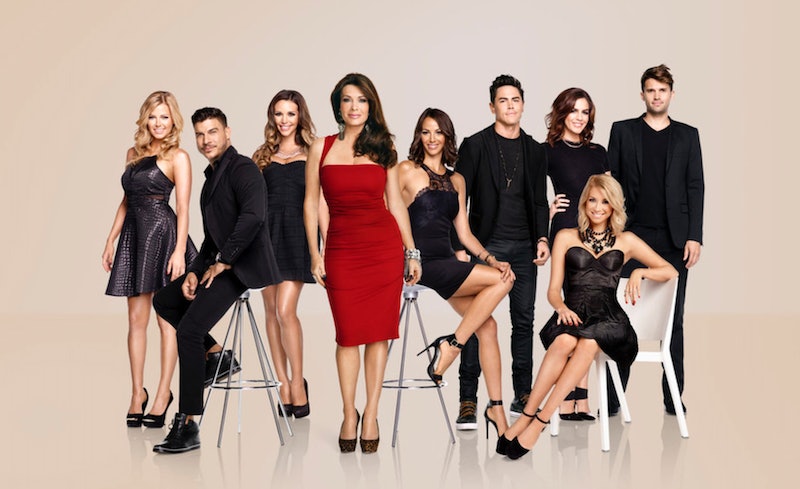 It’s SUR’s tenth birthday, so you know what that means! PHOTO SHOOOOOOOOOT. And not just any photo shoot, mind you. In Monday night's Season 3 finale, the SURvers participated in an extra-special, themed photo shoot to commemorate the restaurant’s milestone. No, the theme wasn't “naked” or "pool" (but that's an excellent guess). This year, it was 1950s themed. Bobby socks, victory rolls, and leather jackets, oh my! The location really took the shoot to the next level: The Vanderpumpers hammed it up in front of the cameras at a place called the Pink Motel. Fellow reality TV devotees might have felt a wave of déjà vu upon seeing the vintage motel's signage. There's a reason for that: The Pink Motel was featured in a recent episode of Dance Moms. It was where the ALDC girls shot a music video for a young YouTube star named MattyB (and where Abby Lee Miller shrieked at half of the ALDC moms and at MattyB's dad/manager over some issue with the contracts. G'bless that Abby. Always fighting that good fight).

The Pink Motel is no stranger to the small or the big screen; the Sun Valley motel has also been featured in Drive, The O.C., and Dexter. It's basically a celebrity. Uh, you know what that means, right? I totally have to add it to my list of noteworthy Season 3 cameos.

And with that, here's the MattyB music video:

More like this
Kylie Jenner Was Almost Named After *Another* Iconic American Family
By Grace Wehniainen
Every 'RuPaul's Secret Celebrity Drag Race' Contestant Revealed So Far
By Brad Witter
Everything To Know About 'Sweet Life: Los Angeles' Season 3
By Kadin Burnett
Here’s Why 'Pretty Little Liars: Original Sin' Season 2 “Won’t Be The Same”
By Kadin Burnett
Get Even More From Bustle — Sign Up For The Newsletter