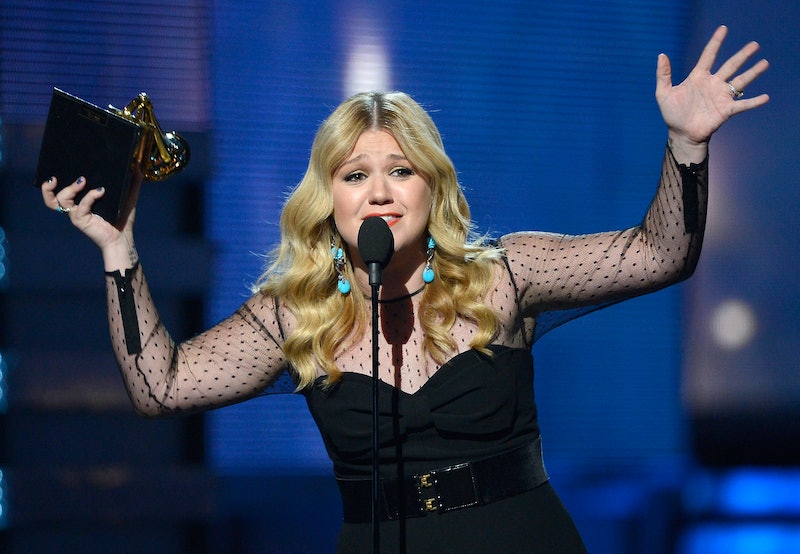 No, I wouldn’t say feminist—that’s too strong. I think when people hear feminist, it’s like, “Get out of my way, I don’t need anyone.” I love that I’m being taken care of, and I have a man that’s a leader. I’m not a feminist in that sense … but I’ve worked really hard since I was 19, when I first auditioned for Idol.

Suffice to say, it upset a lot of people — mostly because that definition of feminism is just plain wrong. In actuality, feminism is just the belief that women and men should have equal rights. Simple, right? So when I saw Clarkson didn't understand the definition, and therefore didn't call herself a feminist, I was frustrated to see yet another female celebrity malign the phrase for all her fans.

But now, Clarkson is clarifying her statement, and it will make you feel a lot better. In an interview with The Huffington Post, Clarkson opened up about that soundbite, and how it was kind of taken out of context. "I was saying that in the past decade, I feel people have associated the word 'feminist' with 'bitch' and 'man-hater' and all these things," Clarkson said. "And I'm definitely not that girl. That's what I meant by that."

I definitely get where she's coming from. She's saying something similar to what Taylor Swift said when she first came out as a feminist. “As a teenager, I didn’t understand that saying you’re a feminist is just saying that you hope women and men will have equal rights and equal opportunities," Swift said. "What it seemed to me, the way it was phrased in culture, society, was that you hate men.”

Although some have discussed why female celebrities shouldn't be asked if they're feminists anymore, because it can be a gotcha question designed to trip someone up and get a Clarkson-esque quote, I think it is important to keep the discussion alive — especially with high profile people. I'm desperate for everyone to learn that feminism isn't this man-hating thing; it's about equality. But the word has changed so much since its introduction, which is something else Clarkson pointed out in her Huffington Post interview, equating the term's demise to that of "diva."

Diva used to mean something great. It was a female opera singer who could floor the room. They could be like, "Oh man, she's such a diva." Now it's a negative term to throw around. We've kind of killed it in a sense. Just recently, people are starting to turn back around to where it's not such a negative, nasty feel to it.

And hopefully we can reclaim the word "feminism" in a similar way. But only if we keep talking about it. Because, at the core, it holds such an obvious definition that it's frustrating when people don't seem to get that. But I'm glad Clarkson was up for having the conversation again, and I'm glad she wasn't originally trashing feminism as an idea and was instead just discussing the context of the word. In reality, Clarkson is very much a feminist, concluding her Huffington Post interview with this phrase, "Obviously I believe in female equal rights. I'm not an idiot. I'm a female. I believe in equal rights across the board."

So now that we've gotten that all straightened out, hopefully we can all focus on reclaiming the word "feminist." People of every age and gender need to see that it's a good thing to be a feminist, and that the definition is much less scary than some people are trying to make it out to be.

More like this
Sadie Sink Would Escape Vecna From 'Stranger Things' With This Taylor Swift Song
By Grace Wehniainen
Here’s How Lizzo Is Supporting Abortion Rights After The Roe v. Wade Reversal
By Brad Witter
Taylor Swift's “Carolina” Theme For 'Where The Crawdads Sing' Soundtrack Is Here
By Jake Viswanath
Taylor Swift Fans Caught A Possible ‘1989’ Clue In Her Latest Awards Show Speech
By Grace Wehniainen
Get Even More From Bustle — Sign Up For The Newsletter