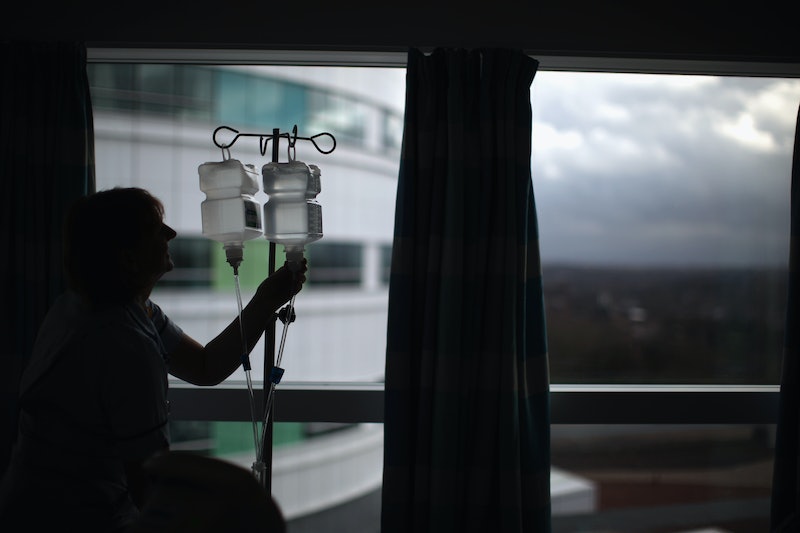 When it comes to wedding vows, we already know that the "til death do us part" line doesn't always work out as planned. But it turns out lots of people also have trouble with the "in sickness and in health" section, too — especially husbands. According to new research, when wives get seriously, ill divorce becomes more likely. When husbands get sick, though, no increased risk of divorce seems to occur. Nice guys. Real nice.

Researchers at the University of Iowa decided to look at how illness impacts marriages, particularly later in life. They analyzed data from 2,701 heterosexual marriages in which at least one partner was over the age of 50. As part of their analysis, they focused on four life-threatening diseases, cancer, heart disease, lung disease, and stroke, to see if they had an affect on the divorce rates among couples.

After looking at the data, the researchers determined that when a wife gets sick from any of the conditions mentioned above, a couple's chance of divorce increases by six percent over healthy couples. When husbands get sick with any of the same diseases, however, a couple's risk for divorce doesn't increase at all. In other words, women stick with their sick husbands, but men don't necessarily stay with their ailing wives.

The researchers don't think we should all jump to the obvious conclusion, though. “Life or death experiences may cause people to re-evaluate what’s important in their lives,” lead author Amelia Karraker said. “It could be that women are saying, ‘You’re doing a bad job of caring for me. I’m not happy with this,' or 'I wasn’t happy with the relationship to begin with, and I’d rather be alone than be in a bad marriage.’”

Which is very possible, though it's interesting that men don't seem to be having similar reactions — or at least, not on a statistically significant scale.

Unfortunately, this isn't the only study to paint a rather cynical picture of modern marriage. Obviously, there are lots and lots of happy, emotionally healthy, mutually supportive marriages out there (as far as I'm aware, I was raised by exactly such a couple). Marriage also comes with lots of benefits, and in fact, divorce rates are declining in America, which suggests that marriage may even be getting better than it used to be. Still, holding marriage up as some shining, magical thing isn't really a good idea, according to science. Here are some more examples of why.

1. Looks Do Matter in Marriage

Or at least, they matter to some people. In keeping with the "men kind of suck sometimes" theme, it turns out that men who marry more attractive women tend to be happier in their marriages; women's happiness in their marriages, however, does not seem dependent on the looks of their spouse. Put another way, being happy in a marriage isn't just about the important emotional connection stuff, or even the big life decision stuff — for some guys, it's also about how hot your wife is. Sigh.

There are, interestingly enough, health benefits to marriage. But it turns out just living together might be even better for you. And that finding holds true for people of any gender.

Although there is some evidence that married sex just gets better and better over time, it seems that lots of couples don't get the chance to find out. The number of couples living in "sexually inactive" marriages has been increasing for years and shows no signs of going back down. Sad.

I don't mean to be cynical about marriage, of course. I know that it's great for a lot of people, and I haven't ruled it out for myself either. But when people put marriage on a pedestal and talk about what a perfect, sacred institution it is, I often want to tear my hair out. Marriage can be great. It can also suck. Because marriages really are only as strong or as weak as the people in them.

And apparently some of the people in them weren't paying attention during that whole "sickness and in health" clause.

Update: This study was retracted in July 2015.

In an email to Retraction Watch, Karraker says:

Shortly after the paper was published some colleagues from Bowling Green State, I-Fen Lin and Susan Brown, emailed me and my co-author about our estimate of divorce. They were trying to replicate the paper and couldn’t understand why their estimate was so much lower than ours. I sent them the statistical analysis file, which documents all of the steps as to how we came to all the estimates in the paper. And they pointed out to us, to our horror, that we had miscoded the dependent variable…As soon as we realized we made the mistake, we contacted the editor and told him what was happening, and said we made a mistake, we accept responsibility for it.

More like this
50 Valentine’s Day Instagram Captions To Post If You’re Single
By Jessica Booth, Lexi Inks and Carolyn Steber
30 Sweet Valentine's Day Caption Ideas For Long-Distance Relationships
By Syeda Khaula Saad and Carolyn Steber
5 Signs You Have A Toxic Relationship With Yourself
By Lexi Inks
Pret & Costa’s Coffee Is The Strongest On The High Street, According To Which?
By Sam Ramsden
Get Even More From Bustle — Sign Up For The Newsletter
From hair trends to relationship advice, our daily newsletter has everything you need to sound like a person who’s on TikTok, even if you aren’t.