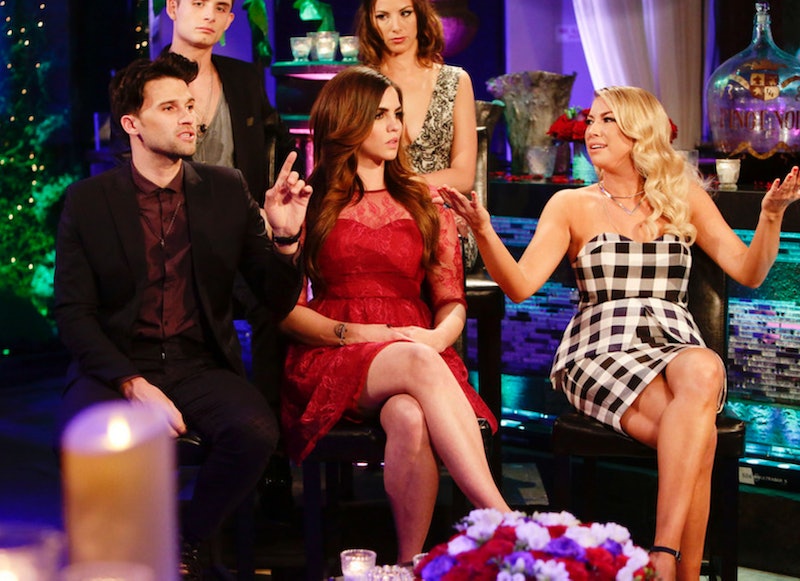 The world was so different a year ago: Kim Kardashian was a brunette, we had not yet seen the dress that compelled all of us question our eyesight/sanity, and Vanderpump Rules' resident statement necklace designer Stassi and SURver-no-more Kristen were very much on the outs. When I watched the final episodes of Season 2, it seemed like peace would never be made between the the former besties; Stassi would not forgive Kristen for sleeping with Jax, and Kristen would never acquire the magical powers necessary to undo the action of sleeping with Jax. They'd reached a stalemate. Yeah, Stassi was willing to talk to Kristen about getting Jax to say Tom Sandoval hooked up with Miami Girl, but I figured that was a one-off. Their friendship was good as toast... OR SO I THOUGHT. Spoiler alert! I thought wrong. Toward the end of Monday night's Vanderpump reunion episode, Stassi revealed that Kristen is the only person from the cast she still talks to. The majority of the cast's least favorite people have formed a two-woman alliance because, hey, might as well. The mending of fences has begun. The mending of fences in a frozen-over hell, that is.

When Stassi cuts people out of her life, she doesn't mess around; both Tom Schwartz and Jax said they've tried to message Stassi, but the messages failed to reach her. The reason: STASSI'S BEEN BLOCKIN' FOOLS.

We live in a world where Stassi's blocked Tom "Panics At Any Sign Of Confrontation" Schwartz and continues to speak with Kristen. The same Kristen she said this about once upon a time:

My, how things can change!