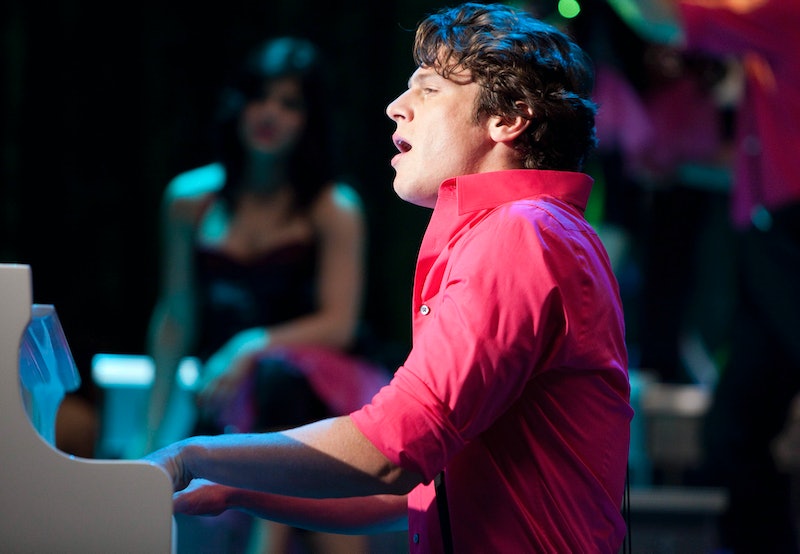 You know a show is winding down for good when the audience's favorite guest stars start returning en masse, and that's certainly been true of Glee Season 6. Not only have the New Directions alumni (Mercedes, Puck, Quinn, etc.) been putting in plenty of appearances, but characters like Emma Pillsbury, Roz Washington, Rod Remington, Doris Sylvester, and Abuela Lopez have turned up, and vanished students like Unique, Sugar, and Joe have returned from whatever fifth dimension they were banished to. It shouldn't be a surprise, then, that Jonathan Groff is reprising his role as Jesse St. James, former lead singer of Vocal Adrenaline — and yet it's still thrilling news.

Although Jesse temporarily joined New Directions during Season 1 while wooing Rachel, he has only put in a couple of brief appearances since then. He first returned towards the end of Season 2 as ND's show choir consultant, tempering Mr. Schuester's unending enthusiasm with some brutal honesty. Despite a brief attempt to get back into Rachel's good graces, she ended up in Finn's arms instead and Jesse vanished once more. He turned up again in Season 3 as the new coach of Vocal Adrenaline, leading Unique and her team to Nationals in Chicago. While there, he put in a good word for Rachel with NYADA's Madame Tibidezus, after Rachel had shockingly botched her audition. New Directions beat Vocal Adrenaline and we never saw Jesse again... although Rachel did get accepted into NYADA, partly thanks to her former flame.

So where has Jesse St. James been for the past three years? (At least, I think it's been three years. Glee's timeline got a little fuzzy when they stretched one school year over two-and-a-half seasons and then did a couple of time jumps after that. Does anyone even know what year it is in the Gleeverse right now?) Obviously Groff himself has been pretty busy, what with headlining his own HBO show. Looking will be wrapping up its second season in a couple of weeks, so thankfully that show finished shooting in time to let its star head over to Paramount Studios to film the final two episodes of Glee.

However, it's harder to know what Jesse has been up to in his time off screen. Did he get fired from Carmel High after losing their show choir a National Championship? Did he buy a roller skating rink and spend his days singing karaoke like fellow former glee clubber April Rhodes? Did he join Derek Shepherd's Society For Men With Gorgeous Hair?

Actually, while his job at Carmel may have ended, it appears that his career was only just taking off. The press release for this week's episode, "We Built This Glee Club," teases that "Rachel must choose between returning to NYADA and doing another Broadway show with her past love, Jesse St. James." That show that Rachel got into after completely forgetting she'd auditioned for it ages ago? Looks like the cast list contains one Mr. St. James himself. In the Gleeverse, has Jesse become a big-time Broadway star? If he had, you would think we would have heard Rachel mention that... but since when has continuity ever been Glee's strong suit?

NYADA vs. Broadway. It's a choice that Rachel has faced before, when Carmen Tibideaux urged her student to remain at school rather than take the leading role in Funny Girl— advice which Rachel ignored, only to get bored with Funny Girl a few weeks in, quit, try her hand at Hollywood, fail, and return to Lima, Ohio in shame. Will the allure of joining Jesse on the Great White Way lead Rachel to make the same mistake again? Or will choose differently this time and finally finish her education?

Whatever her choice, Jesse's return will undoubtedly jeopardize Rachel's already-shaky relationship with Sam. Despite a lot of flirting, some kissing, and a few dates, Rachel and Sam never really defined their relationship, and it seems like now it might be over before it ever really got off the ground. Sam was the only one of her friends who resisted the idea of Rachel taking the Broadway role, encouraging her to go back to college instead. It's easy to imagine confident Jesse, who's always been supportive of Rachel's Broadway dreams, coming in and sweeping her off her feet, away from Sam and McKinley.

But before any big decisions can be made, first a song must be sung. (This is Glee, after all.) The writers wasted no time in using Groff's prodigious pipes — the first song of this week's episode is an epic duet between Rachel and Jesse, who belt out Roxette's love ballad "Listen To Your Heart." If Rachel follows the advice of that song, it's going to be bye-bye Samchel... and hello St. Berry!

Of course, the outcome of this decision has been revealed by some extra-spoilery promotional stills released by FOX. But click at your own risk, Gleeks.

More like this
What’s New On Netflix: 'Stranger Things' & 'Somebody Feed Phil' Return
By Arya Roshanian
What’s New On Netflix: A Victoria Justice Rom-Com & The Return Of David Letterman
By Arya Roshanian
How Reality TV Stars Conquered Your Bookshelves
By Anna Peele
Kylie Jenner Roasts Kendall For Her Cucumber Cutting Skills On TikTok
By Jake Viswanath
Get Even More From Bustle — Sign Up For The Newsletter