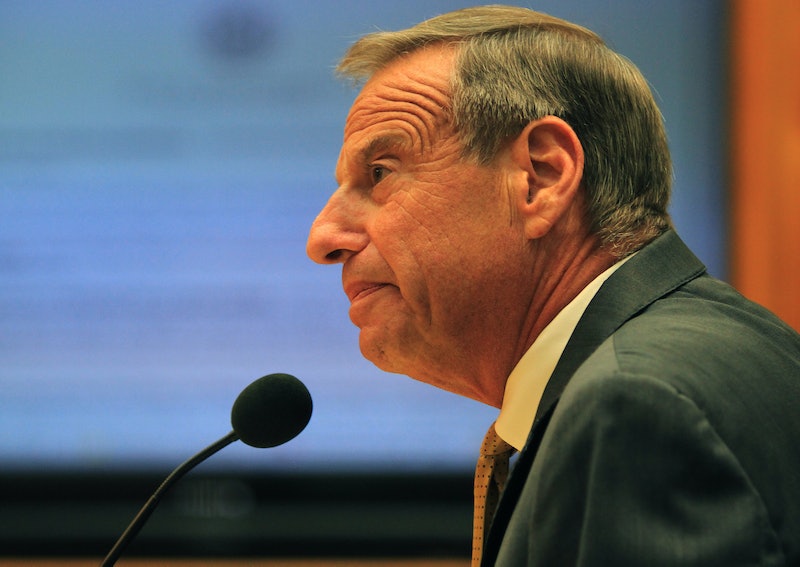 He’s baaaaaaack! You probably thought you’d never have to read the words “Bob Filner” again, didn’t you? Well, no such luck. The disgraced former politician is back in the news, after he pled guilty Tuesday to one felony and two misdemeanors relating to his involvement with three separate women. In exchange for his guilty plea, he'll receive three years' probation, three months of "home confinement," a reduced pension, and mandatory mental health treatment.

The criminal complaint was vague on specifics, but the prosecution briefly outlined the individual incidents in court today. They were all gross: One involved Filner allegedly grabbed a woman's butt at a public event, against her will, while the two were being photographed; another accusation had him kissing a woman on the lips without her consent at a "Meet The Mayor" event, while a third entailed him using force to restrain a woman at a fundraiser.

You’ll recall that Filner, the ousted Democratic mayor of San Diego, got into hot water over the summer when a couple of women accused him of sexual harassment. That hot water gradually became boiling, scalding-hot water as the number of accusers began to multiply; soon enough, no less than 18 women, including a great-grandmother who worked at city hall, accused then-Mayor Filner of making inappropriate sexual advances.

Filner held firm for a while and attempted to keep his job, but after immense public pressure and a rebuke from national Democrats, he resigned in late August.

Earlier this month, it was reported that a criminal grand jury had been empaneled to hear evidence of possible criminal charges against Filner. The investigation has been handled by the San Diego County Sheriff’s Office (normally, the police department deals with this sort of thing, but when this whole thing got started, the police department still reported to Filner, which sort of created a conflict of interest). Similarly, the prosecution is being handled by the state Attorney General, Kamala Harris, since the San Diego District Attorney ran against Filner last year.

“This conduct was not only criminal, it was also an extreme abuse of power,” said Harris in a statement. “This prosecution is about consequence and accountability. No one is above the law.”

While on probation, Filner won't be allowed to vote, serve on a jury or own a firearm, and if he violates the terms of his probation, he'll face up to six months in jail.

You can read an obit of his career here.

More like this
The Most Powerful Photos From The Weekend’s Abortion Rights Protests
By Melanie Mignucci
The Families Of Grenfell Tower Are Still Waiting For Justice, Five Years On
By Bustle UK
Why You're Seeing Green Bandanas At Abortion Rights Protests
By Lexi Inks
Where Is Oscar Torres In 'Only Murders In The Building' Season 2?
By El Hunt
Get Even More From Bustle — Sign Up For The Newsletter