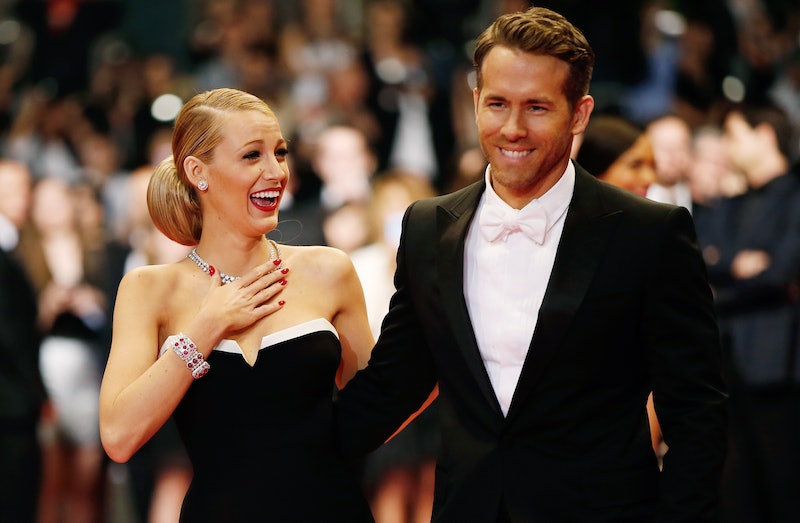 You know that parents' sense of humor, where older people find things funny that are actually pretty corny? It's a bit lame, yet totally endearing at the same time. It appears that new parents Ryan Reynolds and Blake Lively have already reached that level of LOLs. No, I'm not referencing the time Lively tweeted a poop emoji at her husband. I'm talking about how Reynolds must have discovered Photoshop or that face-in-hole site for the first time ever. On Saturday, Ryan Reynolds tweeted a picture of him and Blake Lively as Justin Timberlake and Britney Spears.

Reynolds didn't photoshop any ordinary picture of pop music's greatest couple of all time. He chose the picture. Yup, it's the one where JT and Britney are wearing matching denim-on-denim ensembles. Did they mistakenly go shopping at a Levi's warehouse? No one will ever know, but if I remember correctly, it was a cool look at the time. Hey, things were different back in 2001.

I'm guessing that Reynolds shared the photo for two reasons: A. to prove he's not like a regular dad, he's a cool dad, and B. to distract us from the fact that they still have not revealed their baby's name. Or maybe this was a hint? Maybe their daughter's name is Jean? Or what about Denim? Hmmm, seems like a long shot.

Since this photo is fantastic and deserves to be memorialized forever, I've decided to do Ryan and Blake a favor by photoshopping their faces onto other famous couples. You're welcome, guys!

Prince William and Kate Middleton are one of the most iconic couples. Blake and Ryan should definitely give their royal wardrobe a try.

A royal couple in their own right, there's no one like Brad Pitt and Angelina Jolie.

There's no denying that Justin Bieber and Selena Gomez were like this generation's Justin Timberlake and Britney Spears. It's only fitting that Ryan and Blake morph into them, right?! This photo should totally be their next Christmas card.