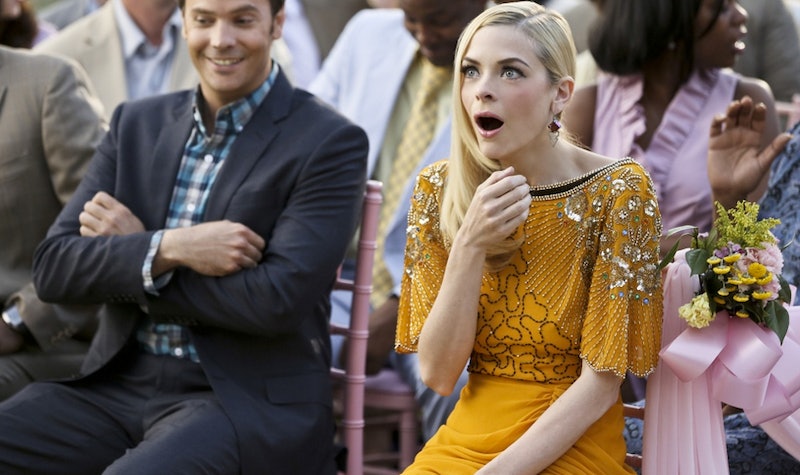 If there was something I did not expect when I started watching Hart Of Dixie four seasons ago, it was to come out the other end completely devoted to Lemon Breeland. She quickly won me over in the second season: Jaime King's undeniable charm and some deft character writing guided her into becoming one of the best characters The CW's ever had in its roster. Hart Of Dixie is coming to an end, but Lemon Breeland will live on as one very solid example of what it means to actually allow characters room to grow. Jaime King's Lemon has surprised us time and time again, in big and small ways.

Hart Of Dixie is no stranger to the idiosyncrasies of small town TV life; in fact, it's often set itself up as being set in a modern, southern Gilmore Girls' town of Stars Hollow, with the townspeople built to reflect that, but with much more of a bent toward love triangles. Lemon was initially positioned mostly to be the romantic rival to Rachel Bilson's Dr. Zoe Hart, with Lemon acting as the very traditional Southern Belle who wanted nothing more than to drive Zoe out of town and live her idyllic 1950s-patterned life. But when her engagement fell apart, everything changed for Lemon — and it was one of the best things to ever happen to the show. Allowing King the range to show us what Lemon had inside her paid off, and the show was treated to one of the best examples of growth at its heart (the other being Wilson Bethel's Wade Kinsella).

Here are 7 reasons Lemon's journey is one we should look up to.

1. She Goes From A Woman Whose Life Revolves Tradition To One Blazing Her Own Path

Season 1 Lemon was obsessed with her life playing out exactly like she pictured. This involved being housewife to the town's resident lawyer and serving as the head of the Bluebell Belles, with not much room for trial and error. And the choice to be a housewife is fine if that's what you're into, but this Lemon was so specific with her vision of the future that she had no backup plans, and no other dreams to speak of — and that vision was entirely dependent on a man and often left casualties (usually emotional) in its wake.

So when that vision did not come to fruition, it was a literally life-changing blow. In its wake, she set about doing what needed to be done: Figuring out who she was and what she wanted out of life, and going after that.

2. She Learns How To Wear Pants & Branch Out In Her Tastes

There is absolutely nothing wrong with preferring to wear dresses and skirts (the legs want what the legs want) — but Lemon's wardrobe in the first season was almost startlingly '50s, to the point where it seemed like a big deal once she started branching out to other decades for her sartorial choices. And is it any wonder King looked amazing in all of them? This may seem like a side note, but watch this series and witness how Lemon's style choices broaden and grow as the rest of her does.

3. She Was Able To Fall Apart And Pick Herself Back Up

Did I mention that major blow when her engagement fell apart? Yeah, Lemon's been through a few of those. Her path's altered multiple times. But she's always rebounded, ready to take life's swerves and find the best next path for herself. There's a lot of resilience in this one.

Just take on of her best quotes:

I don’t need anyone to take care of me. I am Lemon Breeland, strong Southern Belle and I will rise again. Without help. On my own.

4. She Shed Some Of Her Old Ideas Of What Womanhood Looks Like

She's always going to be a sharp woman who doesn't hold back her judgment, but watching Lemon become independent was one of the greatest joys of this show. Watching Lemon find love again has been great, but it could only happen after a very important step: Seeing her realize that she doesn't need a romantic partner or out-dated ideals of womanhood to be her whole, awesome self. And that there is room to mess up and play around in the path to finding that self.

5. She Opened Herself Up To Being Friends With Unexpected People

Speaking of unexpected life paths, one of those led Lemon to a great friendship with someone who in many ways is her personality opposite: Bartender/Bar owner Wade Kinsella, with whom she co-owned a restaurant for a time. Seeing them shed their animosity towards each other and actually achieve emotional intimacy without adding to the baggage of love triangles this show's always loved?

That's been great, as has seeing her shed her animosity towards Zoe as both realize there's really no reason to see each other as competition.

6. She's Always Tried Her Hardest At Everything Worth Fighting For

Her relationship with George didn't work out in the end, but they really had to see it out to that final end, and Lemon fought hard for George's forgiveness in order to get there. Even more wonderfully (and definitely more longterm than a romance with George), she fought tooth and nail for her restaurant businesses once she figured out what she actually wanted to do with her life. She's fought for friendships, she's fought for love, and she's fought for her dreams. This series' major subplot has been about Lemon sorting out her priorities, and it's been a pretty cool ride.

7. She Let Life Surprise Her

I would bet you anything that Season 1 Lemon would be appalled by a description of what her future self goes through; it's simply not what she was picturing for herself. But that path was wholly necessary, and it led to the betterment not just of Lemon but of the show that's been her home. Lemon Breeland is a resilient, spunky woman, and in the long run she's taken every curveball thrown at her with aplomb. I have faith that in her life post-Dixie in the TV ether she'll continue to do the same.