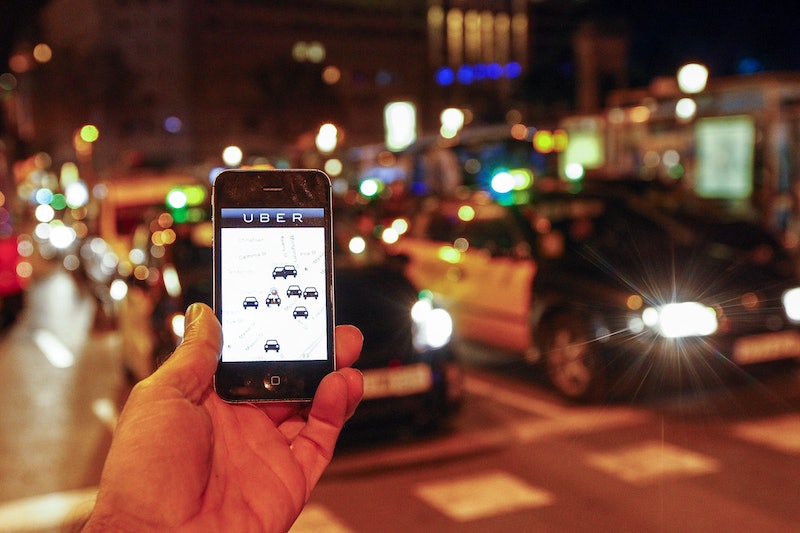 As rideshare services and traditional taxi services face off against each other in a battle for transportation dominance, one question keeps popping up again and again: Is Uber actually cheaper than a taxi? Given how much taxi fares tend to vary from location to location, we might not ever be able to come up with a definitive answer — but if you live in or near New York City, good news: A group of data scientists from the University of Cambridge compared Uber's prices with New York's Yellow Taxi prices in an effort to figure out when one service might be more cost effective than the other. The results might help you get the most cost-efficient trip the next time you need to catch a ride somewhere.

According to MIT Technology Review, the researchers used Yellow Taxi trip and fare info from 2013 obtained by a freedom of information request and calculations pricing out Uber's costs for the same trip via the cheapest option, Uber X. After comparing and contrasting literally hundreds of millions of trips, the teach found that everything can be boiled down to one simple rule: In general, Yellow Taxis will give you the most bang for your buck if the fare is under $35 (that is, you'll go the furthest for the least amount of money); for fares over $35, however, Uber is cheaper. Why is that the case? The researchers theorized that it has something to do with the fact that humans tend to take more short trips and fewer long ones: “This observation therefore suggests that Uber's economical model exploits this trend of human mobility in order to maximize revenue,” they wrote.

But hey, once you've figured out this useful little guideline, what do you do with it to take it to the next level? You use it for the forces of good, of course. Using their data, the researchers subsequently created a free app called OpenStreetCab that tells you which car service you should use depending on the trip you plan to make. I live in the 'burbs now, so it'll only be useful for me when I take trips into the city — but for the sake of argument, let's say that I still live in the apartment in Brooklyn I occupied before I moved out of New York. I used to live right near the Barclay Center, so let's use that address as our starting point; and for our end point? Let's say I'm going to a rehearsal at Telsey Studios in Midtown:

What should I take, OpenStreetCab?

Why, thank you! That's very helpful, indeed! Yellow cab it is.

But let's say I have to go a lot further than Midtown. What if I want to visit the New York Botanical Garden all the way up in the Bronx?

This time, Uber will probably be my best bet. Good to know!

Now, as cool as all this is, it's worth bearing in mind one very important caveat: The researchers did not factor Uber's dreaded surge pricing into their calculations. As such, you should probably think of OpenStreetCab's determinations as suggestions or estimated guesses, not gospel truth. Even if it tells you that Uber will be cheaper, you'll still need to keep on top of what time of day it is, how high the demand for Uber is at that moment in time, and whether surge pricing is in effect (and if it is, how bad it is).

And what of how the two industries are playing together? Uber may have just been banned in Germany (again), but is it killing cabs as much as we might think? In New York, the jury's still out; the Daily News reported at the beginning of March that the Taxi and Limousine Commission has seen a drop in Yellow Taxi rides recently — but just a few weeks earlier, the New York Post wrote that Uber is doing little to hurt to profits of the Yellow Taxis. Personally, I'm not a big Uber fan due to all of the horror stories and questionable business practices; that's just me, though. You do you — and maybe download OpenStreetCab to help out. It's available in both the iTunes App store and the Google Play store.