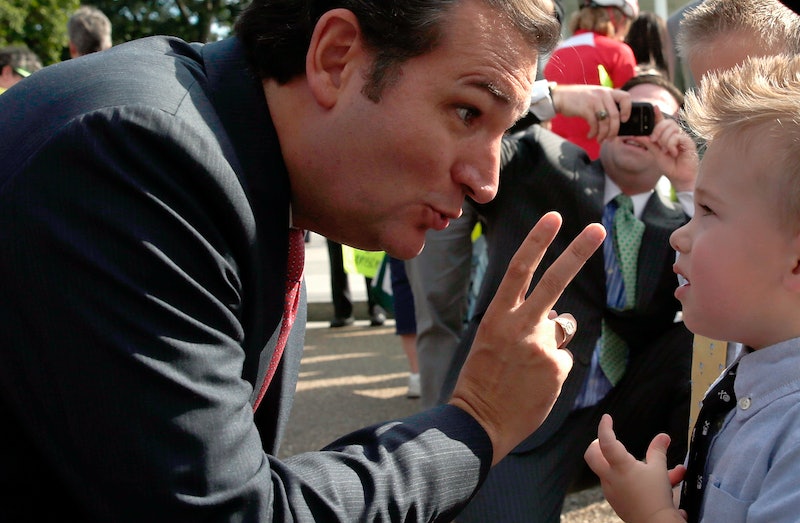 Our medium-length national nightmare is over, at least for now: House Republicans have temporarily touched base with reality and agreed to fund the government and raise the debt ceiling. President Obama signed the legislation Thursday, officially ending the government shutdown. It’s been a volatile couple of weeks, with many notable — or notably shameful — moments.

It all began when Ted Cruz, the junior Senator from Texas, launched a 21-hour-long speech on the Senate floor in protest of Obamacare. His speech wasn’t a filibuster, as it didn’t actually affect the legislative process, but it was good for a laugh, and also for Cruz’s fundraising. The high point came when he read Green Eggs and Ham, which is about a child who insists that something is terrible before he’s had a chance to try it. This was during Cruz’s attempt to derail Obamacare before it took effect, but the irony seemed to escape him. The whole debacle made us realize that there’s probably a lot Republican could learn from Dr. Seuss.

With Cruz’s encouragement, House Republicans refused fund the government unless Obamacare was defunded. But Democrats already pledged that they wouldn’t touch the Affordable Care Act, yet as the clock ticked closer to midnight, Republicans remained defiant. Surely, reasonable observers thought, they wouldn’t embark on such an obviously suicidal mission, would they?

Embark on a suicide mission they did, and the government shut down. This caused all sorts of absurdity. For example, there was Congressman Randy Neugebauer’s confrontation with a park ranger in front of the WWII memorial. The memorial had been closed because of the shutdown, and Neugebauer voted for the shutdown; therefore, Neugebauer chewed out the poor park ranger tasked with blocking access to the memorial. It was a nice encapsulation the sort of logic by which the House GOP was operating.

We also had Congressman Todd Rokita, who, in the course of one five minute interview, managed to blame CNN anchor Carol Costello for the shutdown, claim that Obamacare would cost more economic damage than a debt ceiling breach, and then tell Costello that she was hot but dishonest.

As the shutdown got into full swing, several polls came out showing that, to the shock of Tea Partiers everywhere, the shutdown was actually hurting Republicans! Astonishingly, Americans blamed the GOP more than Democrats for the shutdown, and the Republican Party itself registered its lowest approval ratings ever. What’s more, Obamacare actually became more popular in the eyes of the public after the shutdown, causing many slightly saner Republicans — like Congressman Peter King — to question their party’s strategy.

Time was running out, but the GOP wasn’t going to give up just yet. The best microcosm of Republicans’ thinking during this whole thing came from Congressman Marlin Stutzman, whose words blurred the line between reality and an episode of Saturday Night Live:

We’re not going to be disrespected. We have to get something out of this. And I don’t know what that even is.

That line was so perfect, Obama referenced it in a speech.

Eventually, it became clear that there was no endgame to the Republican strategy, making many a Senate Republican furious with Ted Cruz. House Speaker John Boehner attempted to shift the blame to Democrats, bellowing that “this isn’t some damn game” days before telling his Republican colleagues that they needed to “put some points on the board.” But it was futile. The government was eventually going to be funded, the debt ceiling was going to be raised before it was reached, and Obamacare would emerge unscathed.

Today, that happened, and the madness ended. For all of their efforts, Republicans came out worse than when they started, while the target of their ire remained untouched.