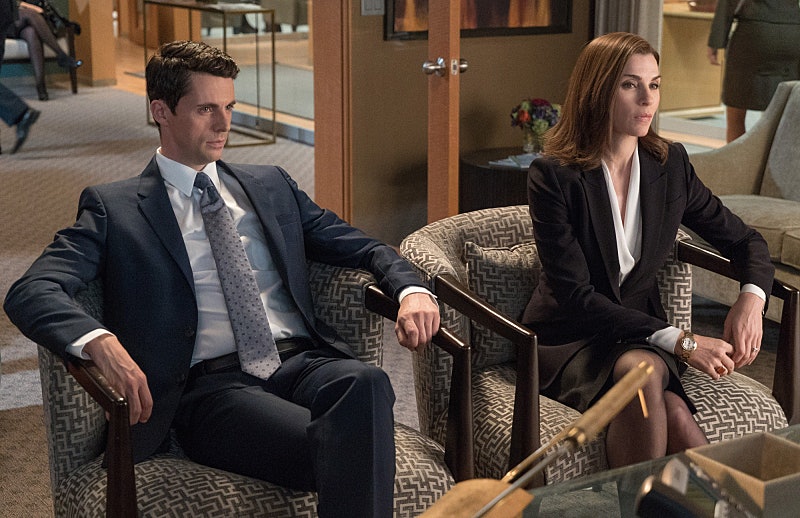 The old proverbs tells us that it's always darkest just before the dawn. Well, that certainly seems to be holding true for The Good Wife fans right about now. For weeks, The Good Wife's Alicia & Finn 'shippers have been devastated as they watched their favorite couple go from adorable flirtation to virtually nonexistent in favor of Alicia making out with her scruffy campaign manager, Johnny Elfman. It's been a decision that has puzzled fans who couldn't figure out why the writers had bothered setting up a possible Alicia/Finn relationship if they were simply going to throw it out in favor of "Jalicia."

One possible reason for this sudden shift in Alicia's love life is the fact that Finn's portrayer, Matthew Goode, was recently cast on Downton Abbey . Speculation has run rampant that he'll be leaving The Good Wife to pursue a larger role on that show, which would indeed force the writers to quickly change the gears of Alicia's love life. But remember what I said about darkness and the dawn? If Johnny Elfman was the darkness in the Alicia/Finn relationship, then this recent interview with Good Wife showrunner Robert King is the dawn:

[What’s sexy] is when someone really knows they shouldn’t be doing something, but they find themselves riding towards the precipice. Julianna Margulies and Matthew Goode are amazing with that kind of tension. We lost Matthew for one or two episodes because of obligations, I think for Downton Abbey, but he’s in the rest of the season, and he’s fantastic.

A quick look at the press releases for the show's upcoming episodes reveals that, while Johnny Elfman will still be around for this Sunday's Election Day episode, titled "Red Meat," his name then disappears from the cast list for the next two episodes. So just as Robert King reassures fans that Finn will be around for the rest of the season, Johnny vanishes into thin air. Hmm...

As I've watched Alicia's random dalliance with her campaign manager over the past couple episodes, I've often wondered what purpose their relationship served. But now that we know he won't be around for much longer, it seems possible that Alicia's physical attraction to Johnny will serve as a stepping stone to make Alicia realize it's okay to open up to her emotional attraction to Finn. She's still hung up on the memory of Will, as we learned in the episode "Mind's Eye." She hasn't been ready to recommit to a real relationship since his death, but perhaps a steamy hookup with Johnny is exactly the motivation Alicia needs to get back in the saddle.

(To make an analogy to another recent shipper controversy, perhaps Jalicia is the Samchel to Alicia's eventual St. Berry. If this sentence makes no sense to you, then you probably don't watch Glee.)

Last September, before Season 6 had premiered, Robert King promised in an interview with The Hollywood Reporter that "we're going to go there" in response to the tension between Alicia and Finn. "But," he continued, "we will hopefully go there in ways that are unexpected." Getting to Alicia/Finn through Alicia/Johnny certainly qualifies as "unexpected." But if all of this frustration has been leading up to Julianna Margulies and Matthew Goode making out, then all will be forgiven.

Hopefully now we can start getting less of this: