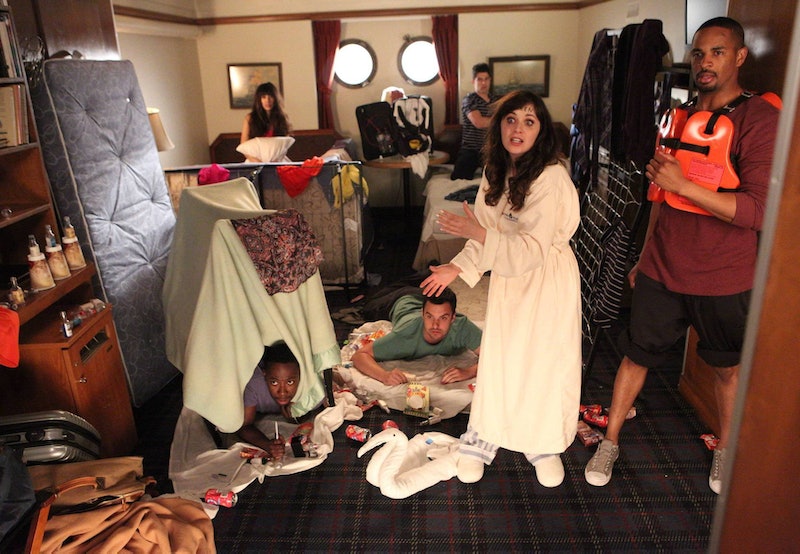 If you've ever wondered what it's like to go on a cruise, I have some good news: cruises are fun. They allow you to experience different cultures, enjoy a new climate, meet people from all over the world, and eat fancy, three-course dinners in the ship's formal dining room every night — often for less total than the price of cross-country plane ticket. Plus, for some reason, there are always 24/7 ice cream cone stations in the ship's casual dining area, so you can have ice cream for breakfast if you're up for it.

As a veteran of the cruise ship experience, I also have some bad news: certain aspects of cruising suck — if you're not prepared for them. For starters, Dramamine is essential — and you should take it before you get sick if you want it to work. Additionally, most of that fancy dinner food will be just short of terrible. You should never forget to bring jackets and jeans on the boat, because even a tropical cruise will get chillier than you'd think. And working out on the open sea is pretty much just about clinging to your elliptical through the rolling waves until you've reached your fitness goal.

But perhaps the most important thing I’ve learned from cruising is that you will meet many types of delightful weirdos (and also regular weirdos) on a cruise ship — whether you want to or not. The thing about being confined on a ship for four to seven days with a bunch of strangers is that you will end up getting to know them, especially the cruisers you will be in close forced proximity with (neighbors, formal dining mates, etc.). Some of them you will like, some of them you will hate — but learning how to interact with all of them will vastly improve your cruising experience.

Most of your fellow passengers on your cruise will probably be screaming children, drunk parents, or laughing groups of friends. But there will always be some chill loners contentedly sitting solo amidst the chaos. They can usually be found on one of the ship’s many side decks with a good book and a warm beverage.

Where you'll find them: Tucked away on every side deck the ship has to offer.

What to say to them: Nothing, unless they speak to you first. Think of them like you would your buddy's emotionally distant cat. Let them make the first move, or you'll risk scaring them off completely.

On my most recent sea voyage, my assigned formal dining table included three separate friendship duos, including my own. Pairs of friends taking on the high seas are a common sight on cruises — though, for whatever reason, the buddy duo is almost always made up of lady friends. Dudes on cruises, more generally, travel in packs.

Where to find them: Anywhere there is alcohol.

How to interact with them: Be friendly, but remember: they came together, so they probably want to hang out primarily with each other. If they don't want to chat, don't take it personally.

Unless you specifically booked a family-friendly ship, you're pretty much definitely going to be on a spring break cruise. Even if it's not spring break. Yes, spring break types won't be the only people on your cruise — but sometimes, it will feel like they are. Beer bongs will be snuck aboard, bud will be in the air, and you'll see more drunk people packed in one hot tub than you have before in your whole life.

Where to find them: Every hot tub, dance club, or bar on the entire ship.

How to interact with them: Be friendly, of course, but don't make eye contact for too long unless you're willing to get roped into a shot contest. Having said that, it's not like you won't be able to escape the partying if it's just not your thing. There's always a quiet spot somewhere on the boat, you've just got to be willing to hunt for it.

Unfortunately, I’ve never gone on a cruise that didn’t include a few sleazy weirdos with boundary issues. On the open sea, just like on dry land, there is always a supply of pervy dudes who won't leave you alone when you're at the club and just want to dance with your friend. But, fortunately, since cruise ships are freaking huge, it's easy to get away from these types. Just swipe left IRL and go get yourself a damn ice cream cone, girl.

Where you'll find them: Everywhere, but especially the clubs.

How to interact with them: Don't. But if they just won't back off, remember that ship clubs have bouncers, too.

I don’t know why any bride-to-be would want to have her bachelorette party on a cruise ship — the drinks are purposefully weak, there are zero strippers, and you’re definitely going to barf because you’re getting drunk as hell on a rocking boat. But every cruise ship has at least one poor doll who thought a bachelorette party on the open ocean was a good idea, and all you can do is enjoy your cocktail and pitifully watch the whole thing go down.

Where to find them: Bars, clubs, theaters, hot tubs, the salon, the spa.

How to interact with them: Be gracious. Their drunken loudness will probably get on your nerves, but remember that they're celebrating a huge life change with their friend, who is probably more than a little nervous about the whole thing. Take it easy on them, even if they're barfing all over the ladies room.

Perhaps the most common creatures on any cruise ship, cute couples are everywhere and they’re super annoying. We get it — you hold hands all the time even though that makes it impossible for anyone to walk around you; you're going to ride the freaking dolphins together when we port; and you'll have a million stupid, romantic pictures to hang over your stupid, romantic fireplace back home. We're all so thrilled that you're happy together, we really are, but the way you're doing it is super annoying.

Where to find them: They're literally everywhere. Where can't you find them?

How to interact with them: Hide when you can, run away when you can't hide, and hope with all your heart you don't get assigned to sit at their formal dining table.

7. The Harried Married Couple With Kids

I might be mad at the consistently puffy-eyed, yelling parents traveling with their families on cruise ships, if I didn’t feel so sorry for all of them. In my experience, parents on ships can be prone to publicly yelling at their kids without actually doing anything to stop their little hellions, acting short with everyone around them because they're exhausted, and letting their kids play with things that are definitely not toys — like, you know, the elevators. I know parents on cruises might act this way because parenting is incredibly difficult and taxing — but I also know that kids running wild on cruise ships are a safety hazard.

Where to find them: Usually at the pool bar or the buffet, hiding from their children.

How to interact with them: Avoid them at all costs; their fuse is short and their children are loud.

Despite what you may have heard, Golden Oldies are in the minority on most cruises, and they're proud of it. Get ready to see some neon fanny packs, some old folks making out, and some old folks twerking it out. It gets pretty weird, I won’t lie, but I ain’t even mad about it. Good for them.

Where to find them: Anywhere there is dancing or gambling.

How to interact with them: Enjoy their quirky ways all you want, but don't dare them to do anything crazy because they will actually do it.

There’s always one group of people who consistently move in packs of ten or more and never wear anything besides those cute/cheesy, matching, family reunion t-shirts. How many of those shirts did they bring? Since there's no communal laundromat, you really have to wonder. T-shirts aside, I've never come across a group of family reunion cruisers who weren't kind, happy, and helpful. Even if their relatives were clearly driving them bonkers.

Where to find them: Poolside, buffet line, comedy club.

How to interact with them: Give them as much room as you can, and don't ask for any family stories unless you're prepared to hear them told by five different people simultaneously.