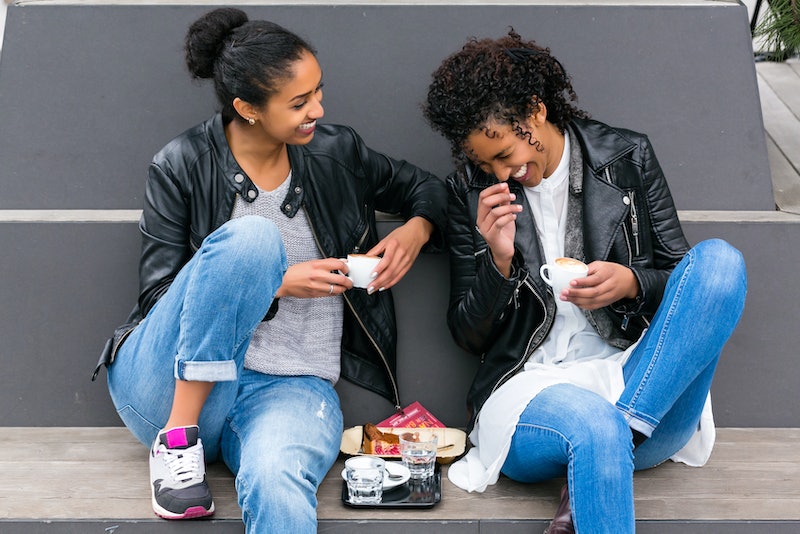 She's listened to you rant about what an asshat your ex was, comforted you when your heart was broken in a million pieces and been super excited for you when all your hard work paid off. You’ve always been there for her, but lately she's been incredibly foolish, and when you try to help, she shuts you out. It's clear that it's time to take a friend break; for both your sakes, and for the sake of your friendship. You'll always be friends with a long history together, and you don't want to stop talking to her for forever.

You can be honest with each other, more so than with almost any other person. You've shared secrets, fears, and heartbreaks together, and in many ways she's closer to you than a sister. She's Cameron Diaz to your Drew Barrymore, or was that her Tina Fey to your Amy Poehler? I don't know. What I'm trying to say is that the two of you are adorable. But you also don't want your relationship to get so broken that it can't be fixed. The best thing to do is to take a step back away from your friend, and be an observer of her life right now rather than a participant.

1. Your friend is making terrible decisions all of the time, and ignores anybody’s advice if it highlights, but doesn’t support her stupid decision.

2. She’s not listening to you, herself or anybody that isn’t blindly agreeing with her.

Deep down, she knows she's acting insane, but she refused to be honest with herself. You can't help her if she won't hear you.

3. She’s dating a sociopath and refuses to break up with them.

Yes, her significant other is hot, but is the lying and cheating really worth it? She could do so much better, but she foolishly thinks her love will change him. You know it won’t, and that this relationship will end in disaster—when it does, you’ll be there with ice cream and a shoulder to cry on.

In trying to deflect attention away from her bad decisions she’s been talking smack about you, and embarrassing incidents in your past, like that party where you went home with her cousin who was dressed as a pirate (and it wasn't Halloween)—ancient history, but it’s still not old enough to take away any of the shame that you feel from that hookup. She’s breaking the girl code and it hurts.

Every crisis is magnified to such an extent that even though she’s always attracted drama, she’s creating extra just so she doesn’t have a quiet moment to think about how effed up her life is right now.

6. She’s over-indulging a little too much.

You’ve noticed that two glasses of wine have turned into three, that there are packs of cigarettes hidden in her apartment, and she’s binge watching Games of Thrones for the fifth time. When you call her on her behavior she says you don’t understand — she doesn’t have a problem, she just deserves a treat now and then for all her challenges. She not only doesn’t need any help, she suggests that you are the one with the problem. No one ever likes to be told to get therapy even if they really, really need it.

In the end, your friendship will be stronger when you come back together, and hopefully then she'll be able to see that you always had her back — even if it was from a distance, and you were wearing body protective gear.

More like this
Emily Ratajkowski & Pete Davidson's Astrological Compatibility, Revealed
By Nina Kahn
Bustle Daily Newsletter: December 1, 2022
By Hayley Schueneman
Bumble's "Compliments" Feature Lets You Message Before You Match
By Lexi Inks
15 Ways To Deal With A Toxic Family During The Holidays
By Gabrielle Moss and Carolyn Steber
Get Even More From Bustle — Sign Up For The Newsletter