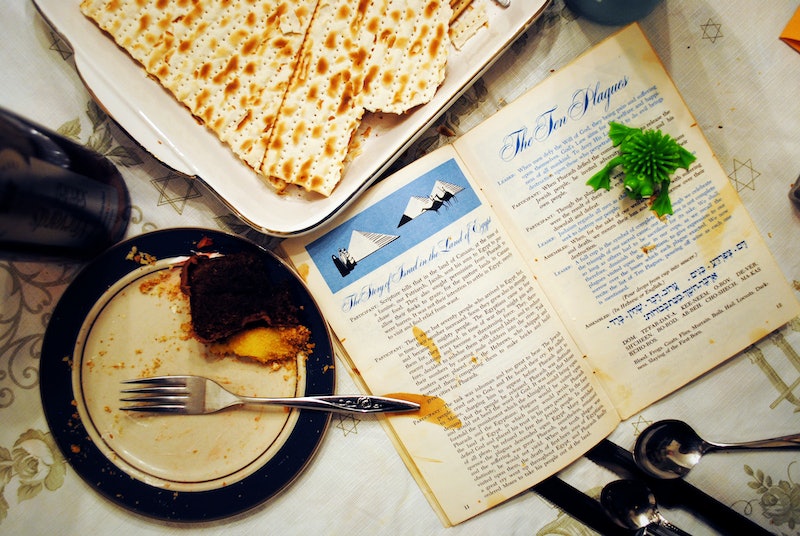 I'm what some would call a cashew — a nutty nickname that symbolizes my Jewish and Catholic roots. But even though my father is a member of the chosen people, we celebrated very few Jewish holidays in our home. So when my boyfriend, a full-fledge Jew, invited me to Passover, it was time to brush up on my knowledge of Passover traditions and customs. I knew I had a lot to learn about the Passover Seder.

OK, maybe a lot is an exaggeration. Although my father is not the most kosher of Jews, he made sure my sister and I knew about the customs, holidays, and practices of his people. Not to mention, I've made many Jewish friends over the years who taught me better than any religion class could. But even so, there is more to Passover than the matzo and Manischewitz. Every aspect of the Seder supper, from the blessings to the extra glass of wine, symbolizes part of a major story in the Jewish religion.

Whether you want to impress your significant other's family or simply want to learn more about Passover Seder, it's important to study before the big day (or rather, days) arrives. From the first prayer to the final bite, here's everything you need to know before attending your first Passover Seder. May it be a blessed one!

Passover commemorates the Israelites' escape from Egypt. But you probably want a little more info than that.

For decades, the Jews were enslaved by the Egyptian Pharaoh. After witnessing their suffering, God sent Moses to Pharaoh demanding he "let His people go." Pharaoh refused, forcing God to send a series of plagues to Egypt, which eventually destroyed all the crops and livestock.

On the evening of the final plague, which killed all first born male children, Pharaoh chased the slaves out of Egypt. With minimal provisions, the Jewish people embarked on a trek through the desert. After a 40-day journey, which involved Moses parting the Red Sea, the Jews arrived at Mount Sinai, and began their lives as the chosen people.

The better question is what don't you eat. The Jews were in such a hurry to leave Egypt, that their bread did not have time to rise. As a result, they relied on unleavened bread to make it through their journey to Mount Sinai. Today, Jews pay tribute to this by avoiding any leavened products during Passover. This means beer, certain baked goods, and bread. This is in addition to the traditional Kosher restrictions.

So what will you find on the table? For starters, a lot of matzo. This unleavened bread, which tastes a lot like a cracker, can be served with a savory dip, in a tasty soup, or as a sweet treat. If you're lucky, there will also be braised brisket served with horseradish sauce, and an assortment of Kosher side dishes.

As for alcohol, you'll likely be sipping on some Manischewitz, a super sweet wine that leads to a horrible Passover hangover.

3. What Happens At The Seder?

Despite the array of amazing food, you shouldn't go to Seder on an empty stomach. At least, not if you're dining with a more traditional family. Before the meal actually begins, blessings will be made, prayers will said, and stories will be told. Since this is the most religious part of the meal, we suggest studying the specifics of the Passover events before sitting down at your Seder.

4. What Is On The Seder Plate?

You may notice an OCD-like dish at the center of the table. This is the Seder plate, which holds a set of items symbolic of the Passover story. The items include an egg, lettuce, a lamb bone, charoset (a mix of apple, nuts, and spices), parsley, and bitter herbs, and they are used throughout the prayer portion of the evening.

5. Who Is the Extra Place Set For?

No, your host didn't miscount. Jewish families set an extra cup of wine for the prophet Elijah. During the Seder, families open the door and welcome him into their home. His arrival means everyone present is able to partake in the paschal offering.

Your host won't expect you to be fluent in Hebrew, but it would be nice for you to know a few key holiday expressions. Here are a few to get you through the Seder:

Haggadah (huh-GAH-duh) — The book read during the Seder