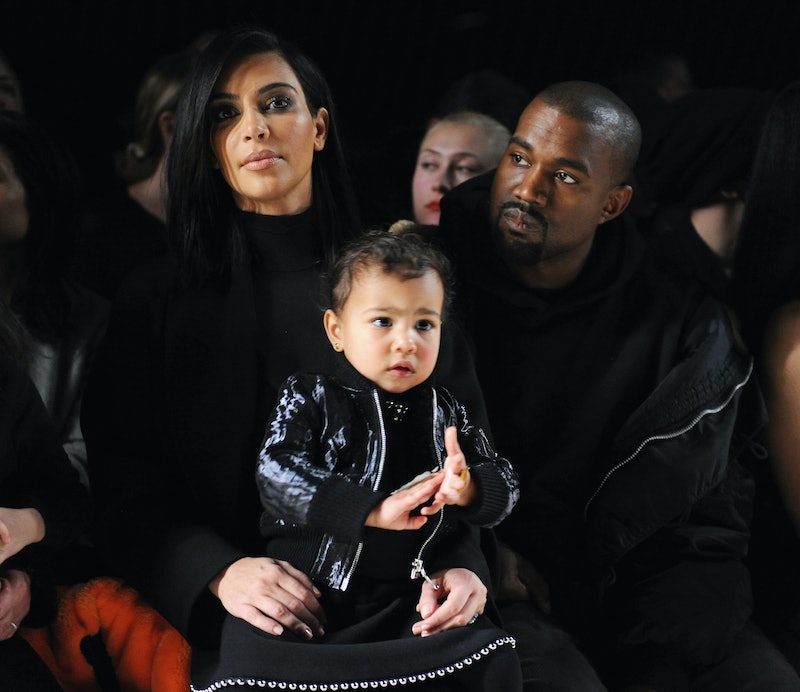 As a general rule, babies freak me out. They’re so fragile with their soft heads that could smash with the tiniest tap, and they’re so incapable of communication except in the most basic ways that I feel like I’m interacting with a puppy rather than a human being. I don’t do well with kids, but that doesn't mean I'm immune to the charms of babies wearing cool outfits. There’s something about a picture of a toddler in a pair of denim overalls that will always make me coo, even if seeing a toddler on the subway terrifies me. I’m obviously not the only one who swoons at the sight of kids in fabulous outfits. There are hundreds of listicles and Instagram accounts and Tumblrs devoted to fashionable kids that are proof enough of this cultural obsession.

The fascination with well-dressed kids only gets more intense when you start talking about famous kids, a topic in which I’m embarrassingly well-versed by this point. North West’s Yeezus bomber jacket slays me, as does Blue Ivy Carter’s personalized studded leather jacket. That picture of Prince George in his little navy sweater vest? To die for. And let’s never forget Suri Cruise, who arguably sparked the Internet’s obsession with kid-sized fashion with her million dollar wardrobe full of designer duds.

The media scrutiny on famous kids’ fashion doesn’t end once they get out of their terrible twos. It lasts long into adolescence, and kids who have grown up in the spotlight are often held to the same standards of perfection their celebrity parents are. Although it's generally meant to be harmless and even complimentary, the conversation around children's fashion, particularly celebrity children's fashion, is dangerous.

Take, for example, the glowing reviews of Lily-Rose Depp's appearance at Chanel's Metier d'Art fashion show in New York City the other day. I came across a Tweet after the event asking, "Guess which celebrity kid is fashion's new 'It' girl?" Obviously I clicked on it, and was greeted by a picture of Depp, in a light blue and pink cropped tube top and matching pencil skirt, paired with a matching scarf and tied off with a louche silver belt. All of the commentators agreed that her look was stunning; the recurring refrain was how she "turned so many heads" and looked so mature and “all grown up." What made me uncomfortable about the response to Depp's new look was buried at the bottom of all these articles: She is 15.

What so intensely bothers me is how looking older and more mature than Depp's 15 years is framed as a compliment. Neither of my parents is a world-renowned actor or a spokesperson for Chanel, but I was 15 years old once, too, although I definitely did not have the poise that Depp demonstrates in these photos, for which she should be credited. But I can't imagine the pressure placed on Depp by the media, especially now that she's "debuted" as a girl to watch.

I was already so self-conscious when I was 15, with "punk rock" Converse high-top sneakers on which I scribbled edgy sayings on the rubber soles. Of course I felt pressure to impress classmates and cute boys and maybe my mom every once in a while, but the primary goal of getting dressed for school was never to look older. It was instead to figure out what I liked and what image I wanted to project to the world, even if I wasn't able to explain it that way at the time. I never had to really consider the opinions of others in any serious way, a luxury Depp no longer has with this new "It" girl status.

I did, however, develop a heady obsession with "It" girls like Alexa Chung and Audrey Hepburn when I was 15, trying to osmotically learn as many beauty lessons from them as I could by staring at their pictures in magazines and movies. It further frustrates me that Lily-Rose Depp is being lauded as fashion's new "It" girl because the sense of style associated with being an "It" girl only comes with lots of time and with even more experimentation. Depp should instead be lauded for playing around with clothes as a 15-year-old girl, not for looking older than she really is.

My opposition to this discourse isn't a moral one, and I'm by no means saying that kids and teenagers can't dress up how they want because it's immodest or inappropriate. If Lily-Rose wants to wear a cropped tube top or Kylie Jenner wants to wear a skimpy bikini, then whatever. It’s cool. I wore plenty of things that were "inappropriate" when I was a teenager, from dresses that were cut way above the knee to shirts that accidentally dipped too low to a pair of neon pink patent leather pumps I purchased at a Goodwill in Haight-Ashbury for less than $10.

The discourse around John (né Shiloh) Jolie-Pitt's wardrobe is the best example of respecting children in their fashion choices. At the age of three, Shiloh told the family she wanted to be called John, a decision the family has totally respected. Media coverage initially criticized Angelina Jolie for "turning her female-born child into a boy," but over time, the commentary has caught up to the family. John showed up on the red carpet for the premier of Jolie's movie Unbroken with Brad Pitt and siblings Pax and Maddox in a dapper suit. The accompanying commentary was overwhelmingly respectful and supportive of John's decision to wear what she wanted, as well as to experiment with whatever clothing makes John feel most comfortable in her skin.

It's important to give kids and teenagers the chance to experiment with clothes and style and makeup, without incessant media pressure to look perfect for fear of wearing something that will somehow offend by not conforming to a gender norm or by showing “too much” skin. This is especially true for kids who are already dealing with media scrutiny because of who their parents happen to be. When you're trying out a new look for the first time, you're bound to look less than perfect, and that's OK. We’ve all made embarrassing fashion mistakes in childhood, but most of us were lucky enough to never have those documented in the public eye.

It makes sense that celebrity culture would breed celebrity kid culture, and trust me when I say that I understand as much as the next person that it's fun to comment on kids' outfits. Who doesn't love a baby in a fedora? I'm just asking that we be conscious of what we're commenting on. We should celebrate celebrity kids for experimenting and figuring out what they like to wear, rather than labeling them as "style icons" before they're out of diapers. And when you’re a toddler, your parents are the ones dressing you, so let’s stop saying that North West is a “fashion icon," even if we still squeal when Kim posts a pic on Instagram.

More like this
Kylie Jenner's Silver Eyeshadow Is *So* Y2K
By Olivia Rose Ferreiro
Most Comfortable Underwear For Big Butts
By Audrey Williams
Social Media’s Favorite Fashion Influencer is Meredith Blake from ‘The Parent Trap’
By Morgan Sullivan
Are Skater Shoes the Next Y2K Trend to be Revived by Gen Z?
By Lauren Alexis Fisher
Get Even More From Bustle — Sign Up For The Newsletter