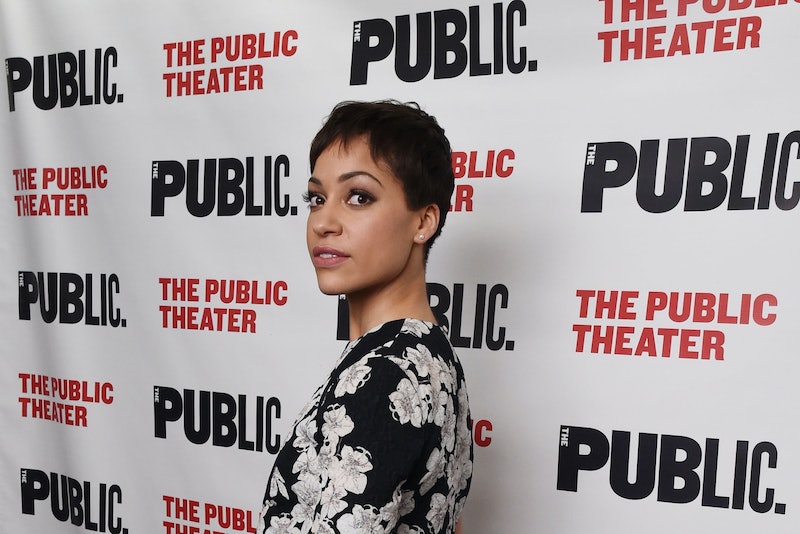 Here's some news that will likely make The Good Wife fans hearts flutter: casting is now underway for Season 7... even though CBS has yet to officially renew the show past its current sixth year. TVLine broke the news this morning that 29-year-old actress British actress Cush Jumbo is joining The Good Wife Season 7 cast; this, coupled with last week's news that the principal cast had signed new two-year contracts, should give viewers hope in the absence of any sort of official announcement from the network. Despite the fact that TVByTheNumbers stubbornly continues to list The Good Wife as a "toss-up" on its Renew/Cancel Index, surely they wouldn't start casting for Season 7 if they didn't have a pretty good idea that they would be returning for more episodes, right?

While we tap our toes and wait impatiently for CBS to renew the best drama on broadcast television, we might as well talk about the show's newest casting announcement. Who is Cush Jumbo? While she's not yet well-known on this side of the pond, you may recognize her if you follow British television. In 2009, the actress appeared in the third season of the popular sci-fi series Torchwood (subtitled Children Of Earth) alongside Arrow's John Barrowman. In 2010, she joined the cast of the acclaimed comedy Getting On, which was later adapted by HBO for American audiences.

While the writers have been mum on exactly who Jumbo will be playing, that won't stop us from speculating, will it?

This is the theory that Michael Ausiello puts forth in TVLine's announcement of Jumbo's casting: "The Good Wife has an opening for a new private eye. A buzzy actress is set to join the cast in a major-ish role. You do the math." The headline even goes so far as to ask if the actress is "the new Kalinda." It's easy to see why Ausiello would jump to this conclusion: both Jumbo and Archie Panjabi are non-white British female actors. But, it's exactly these similarities that caution me against this assumption. Wouldn't the writers want to distance themselves as far as possible from Panjabi's painful departure by casting someone completely different as the firm's new investigator? And while we're on the topic... Doesn't the firm already have another investigator? Just bring back Robin, writers!

A Lawyer At The Firm

Of course, being the new private investigator wouldn't be the only way Cush could join Florrick, Agos & Lockhart. The firm also has lawyers and she could easily join their ranks as a new hire — or even as a longtime litigator we've just never heard of before. However, if this is the case, then hopefully Jumbo will stick around for a while and not just vanish into thin air after a few episodes. (Remember when much fanfare was made about Taye Diggs joining the cast of The Good Wife before Season 6 started, only to have him appear in three episodes at the beginning of the season, and then disappear with no explanation?)

Now that Alicia has been ordered to step down as State's Attorney by the DNC following the voter fraud scandal (and we see her do just that in the promo for the next episode, in a press conference cleverly mirroring the pilot episode), there's a question of who exactly will step into the vacated office. Will runner-up Frank Prady now be the default winner following Alicia's resignation? Will there be a new election held? Will another elected official already within the government be promoted to the position? If it's either of the latter two options, there's a chance that Jumbo could be Illinois's new SA come Season 7, facing off in court against Alicia Florrick — the woman whose office she usurped. Imagine the delicious dramatic possibilities...

Then again, just because The Good Wife is a legal drama doesn't mean Jumbo has to be playing a lawyer. If Season 7 is indeed the last season of The Good Wife, as most fans predict based on the episode titles, then Alicia's complicated romantic life will hopefully have to arrive at some much-needed resolution soon. If the love triangle between Alicia, Peter, and Finn is thrust into the forefront next year, then perhaps we'll get to meet this mysterious woman Mr. Polmar has started seeing, whom he alluded to a few weeks ago. (Hopefully she plays the accordion.)

Ever since Alicia and Kalinda's friendship was ruined by the revelation that Kalinda had slept with Peter, the show's protagonist hasn't really had a solid female friend — and that's a shame. She has a wonderfully layered relationship with Diane, although the older lawyer is more of a mentor than a friend. And she flirted briefly with a friendship with Maura Tierney's Maddie Hayward... although that fell apart when Maddie decided to run for Governor against Peter. If The Good Wife really is about to wrap things up, it would great to see Alicia have at least one solid female friend by the time the series finale wraps. Really, Jumbo could play absolutely anything — a lawyer, a reporter, a barista, a rock star, a garbage collector — and as long as she has an interesting, complex relationship with Alicia, I'll be thrilled.