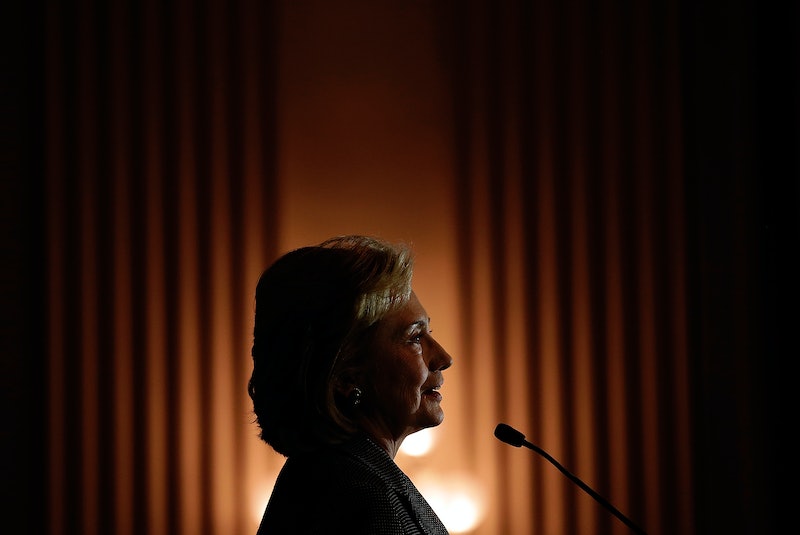 Hillary Clinton’s past opinions are coming back to haunt her, as she changes her mind on yet another point she campaigned on in the 2008 presidential primaries. First, it was the Democratic front-runner’s “evolution” on gay marriage. On Thursday, Clinton changed her immigration views to support driver’s licenses for undocumented workers, a drastic switch that already has potential Democratic candidate Martin O’Malley accusing Clinton of flip-flopping on the issue.

In a 2007 presidential debate, Clinton was much less decisive, and her prevarication on the issue threw a wrench in the works for her then-seemingly unstoppable campaign. When asked about New York's attempt to make licenses available for undocumented immigrants, Clinton said the proposed bill made “a lot of sense” but added she would not support it. A couple weeks later, after critics said she hadn't given a clear answer, Clinton firmed up her stance. “As president, I will not support driver’s licenses for undocumented people,” she said in a campaign statement.

But since then, Clinton appears to have had a change of heart. On Thursday, Clinton’s team released a statement declaring the Democrat wholeheartedly endorsed the driver’s license initiative. A spokesperson told The Washington Post:

Hillary supports state policies to provide drivers licenses to undocumented immigrants. This is consistent with her support for the president's executive action.

Now, O’Malley — former Maryland governor and, if he decides to run, potentially Clinton’s foremost challenger — has called out what he sees as Clinton’s flip-flopping. “I’m glad Secretary Clinton’s come around to the right positions on these issues,” O’Malley told a Guardian reporter at an event at Harvard University Thursday. He continued:

I believe that we are best as a party when we lead with our principles and not according to the polls. Leadership is about making the right decision, and the best decision before sometimes it becomes entirely popular.

Clinton’s altered stance on the driver’s license question comes just a couple days after she announced that her position on gay marriage had evolved. Clinton ran in the 2008 primaries openly opposing gay marriage, but in 2014, she said the question of gay marriage should be decided on a state-by-state basis. On Wednesday, her campaign released a statement confirming Clinton believes marriage should be a constitutional right for same-sex couples. The statement also urged the Supreme Court to decide in favor of marriage equality. The SCOTUS ruling is set to pass this summer.

Both of Clinton’s 2008 views — on driver’s licenses for undocumented immigrants and on same-sex marriage — may have been safe at the time, but these are now considered deeply misguided by many of her potential voters. Meanwhile, O’Malley’s record on both questions is comparably excellent and free of indecision, a fact he is currently capitalizing on. O’Malley signed a bill legalizing same-sex marriage in Maryland and has referred to marriage equality as a “human right” that should be enshrined in national law. During his time as governor, he also signed a bill giving illegal immigrants access to driver’s licenses.

O’Malley has not yet announced a presidential campaign, and has said that he will decide whether or not to run in May. Given the dearth of further Left candidates ready to challenge the relatively centrist Clinton, O’Malley is being urged by the Democratic Party’s progressive base to join the race, according to The Guardian. And though he’s not yet decided whether to run, he’s firming up on many of the election’s crucial issues while taking sly pot shots at his competition. On Thursday, O’Malley came out strongly on yet another issue that Clinton has somewhat glossed over — namely inequality and the minimum wage.

Following massive low-wage protests on Wednesday, O’Malley said Thursday that he supports the Fight for $15 campaign, which seeks to more than double the minimum federal wage. By contrast, Clinton’s tweet about the protests — “Every American deserves a fair shot at success” — made no promises and no endorsements. Meanwhile, O’Malley is clearly willing to put his money where his mouth is. As governor, he raised Maryland’s minimum wage to $10.10, and on Thursday claimed he would have upped that figure had he received legislative support.

But there’s still a long way to go if O’Malley does decide to run. “It’s a colossal undertaking, and there are many different components of (a presidential race),” he told the Harvard crowd Thursday. “Organization, policy, personnel — it’s a lot to put together. I’ve never run a bad race, and I don’t intend to start now — if I were to do this,” he said.

There’s also Clinton’s solid support base to contend with. A poll conducted this week revealed that in New Hampshire, the state Clinton is set to visit next, only 3 percent of voters would support O’Malley, which is much less than the 45 percent in favor of Clinton. O'Malley also comes in behind Vice President Joe Biden and Bernie Sanders, the progressive Vermont senator who has said he will make a decision whether to run “in the next couple of weeks.”

Whether or not Clinton’s apparent inconsistency on these issues damages her run, it will, to a large extent, depend on who her Democratic challengers are. And at the moment, it’s a fairly lonely playing field.