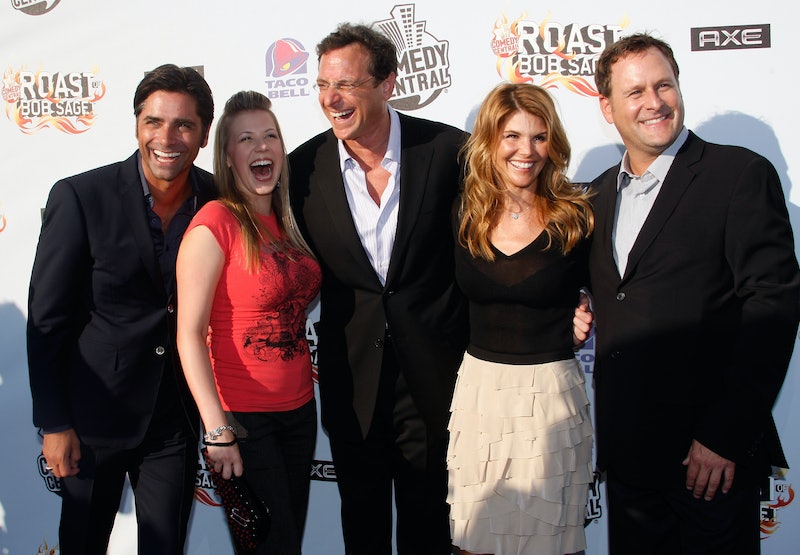 The most important news you'll hear today is that Full House is getting a reboot. The stars of Full House have had several reunions over the years, but only as friends, and never in an officially sanctioned spinoff. Thank goodness Netflix is now making all our dreams come true.

Fuller House will star Candace Cameron-Bure and Andrea Barber in their roles from the show as DJ Tanner-Fuller and Kimmy Gibbler. Years later the two are still BFFs and living together after DJ's husband dies. During an episode of Jimmy Kimmel Live! Monday, John Stamos told Jimmy Kimmel that it's kind of a role reversal with DJ taking the place her father was in at the start of the series. Only this time she has three boys instead of three girls, and the people living in the house are her sister Stephanie (Jodie Sweetin) and, of course, Kimmy Gibbler.

Reportedly much of the original cast is in negotiations to appear on the show, which is pretty much amazing. If you ask me, it's literally the best thing to happen since Friends and Gilmore Girls hit Netflix. But, since Netflix has yet to announce a date for when we can expect to see this glorious sequel, we're left waiting and wanting. So, in the meantime, let's look back at all the reunions the cast has had over the years. Hopefully they'll tide you over until the real thing.

Two years after the finale of the show, the cast (minus the Olsen twins) stopped by AFHV to surprise host Bob Saget. It was the first of many reunions to come.

Dave Coulier, Bob Saget, Candace Cameron-Bure, Scott Weinger, and Jodie Sweetin gathered at the premiere of Mary-Kate and Ashley Olsen's movie New York Minute in 2004. It's a rare moment of them all together post-Full House, and it was great to see their acting family support them.

To celebrate 25 years since the first episode of Full House premiered, the cast got together for a party in L.A. Everyone was there (even Steve and Kimmy Gibbler). As usual, the Olsens skipped the event, but it was still a fabulous reunion.

Jesse and the Rippers reunited to play some of their hits on Fallon's show. There's even a surprise special guest at the end when Lori Loughlin (Aunt Becky) shows up. Spoiler alert: She and John Stamos kiss, and it's perfect.

When Stamos hit the half-century mark, his Full House friends came out to celebrate in style. Even Ashley Olsen, who usually skips Full House reunions, showed up for this special event.

The Full House guys stopped by to answer trivia questions and talk about the show's best romance: the bond between Uncle Jesse & Becky.

When Bure competed on DWTS, two of her Full House co-stars showed up to cheer her on.

Years after playing Steve and DJ, the pair reunited as a couple on the show The Neighbors for the series finale.

Nothing like a wedding to bring a family together! Last summer, Candace Cameron-Bure, Andrea Barber, John Stamos, and Bob Saget showed up to watch Uncle Joey — I mean, Coulier — tie the knot.

This past January almost the entire cast got together to celebrate Full House creator Jeff Franklin's birthday. They even sang a rendition of the theme song at his party.

All of these moments have lead up to the most important one: an official Full House reunion TV show, and I can't wait.