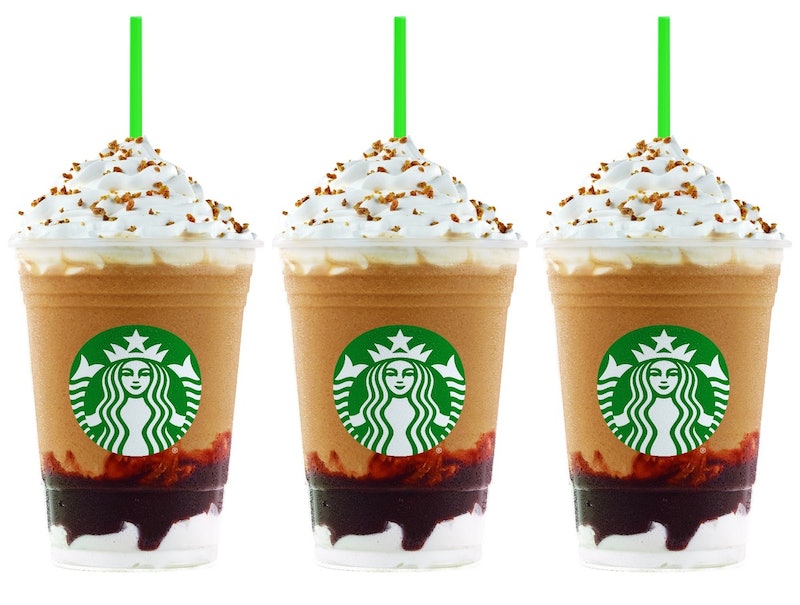 Ever since the announcement came that a S'mores Frappuccino was finally hitting the Starbucks menu, we've all been searching for every drop of information we can find about the drink: What's in it? When will it arrive? Is it caffeinated? And, perhaps most importantly, how long will Starbucks have the S'mores Frappuccino? We've already explored a few of the other questions, but good news, everyone — now we've finally got an answer to that last one: We've got literally all summer to try it. Hoorah!

We reached out to Starbucks to get the official word on how long the S'mores Frappuccino is expected to stick around; said a spokesperson for the mighty 'Bux to Bustle via email, “The S'mores Frappuccino will be available while supplies last through September 7, 2015.” The sentence is a little loaded, since it contains both “while supplies last” and “through September 7, 20150” — that is, it's always possible that the S'mores Frap will be so popular that we'll deplete the world's S'mores Frap ingredients supply before the final end date of September 7. I think that's unlikely to happen, though; and besides, September 7 is a loooooong way from now. So, after the drink makes its official debut on April 28, you'll have more than four months to get a hold of one yourself. Not too shabby, right?

Oh, and as a reminder, you'll be able to nab any Frappuccino flavor including the S'mores Frap for half off during Starbucks' spring Happy Hour event: From May 1 to May 10 between the hours of 3PM and 5PM (or 6PM, if you're a My Starbucks Rewards member), all Frappuccinos are 50 percent off. If you're intrigued by this newest offering, but aren't sure if you're willing to shell out four or five bucks for one… well, let's just say that Happy Hour might be the perfect time to try the flavor out.

And hey, even if you somehow miss it, let's not forget that there are plenty of other S'mores-themed foods you can try. If you're good in the kitchen, you might try these S'mores-inspired recipes; if you're not, though, you can always pick up a few of the the items below:

I don't eat them much anymore, but Luna Bars were my on-the-go pick during my busier years. And hey, they're gluten-free now, too, so that's a nice bonus.

I will always be an unabashed Keebler fan.

Anyone else think this might be dynamite in a White Russian?

Because eating a Pop Tart for lunch is occasionally acceptable.

OK, so technically, these haven't been confirmed yet. But we're waiting for them, Oreo. Waiting oh so patiently. Just sayin'.