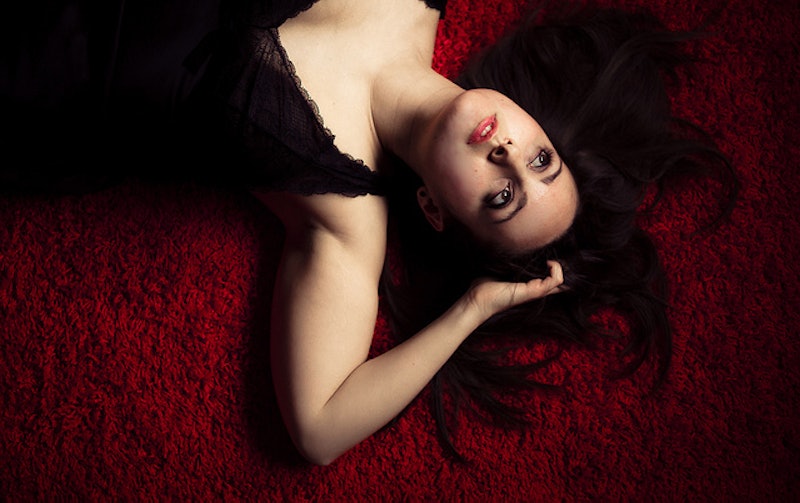 In the ongoing saga of men and women wanting different things, BaDoink has released an infographic that details the most popular sexual fantasies for men and women, and there is zero overlap between what the two sexes want in the bedroom. This probably doesn't come as any great surprise, though I will say that if you're in a relationship in which your sexual preferences align with your partner's, there's a better chance you're happy and satisfied. Food for thought.

That said, if you're in a relationship and you're having sex, there's a good chance you've discussed your sex fantasies with your partner, and you can see if any of these echo your top dreams. And I suppose there's also a good chance you haven't discussed your sexual fantasies and desires yet. If that's the case, then this is the perfect entrée into that discussion. Threesomes, role-playing, being a stripper for the night — the options are endless. It's time to get talking and start fulfilling those desires.

Without further ado, here are the top five things men and women want to do in bed, as reported by BaDoink (or, you know, not in bed — hello, "exotic locations"!).

This should come as a surprise to exactly no one.

French maid? Nurse? Stripper? Oh wait, no, that last one is filed in the women's fantasies. (See below.)

4. Getting Caught In The Act

5. Having Sex In "Exotic Locations"

This one surprised me at first. I thought "exotic locations" meant, like, Hawaii or the Bahamas. But then I realized that this probably means bar bathrooms, rooftops, that kind of thing, and then it all made sense.

1. Being A Stripper For A Night

In the immortal words of Usher: "I don't mind if you dance on a pole — that don't make you a ho." Go for it, ladies.

2. Making Out With A Gorgeous Woman

And this pairs nicely with being a stripper for a night. Two birds, one stone?

5. Having Sex With A Stranger

More like this
Are Quality Time & Gift-Receiving Love Languages Compatible?
By Lexi Inks
The 19 Best Tweets & Memes About Bisexual Awareness Week
By Lexi Inks
10 Creative Sexting Ideas That Don't Involve Nudes
By Lexi Inks
Breeding Kinks Have Been On The Rise Since Roe V. Wade Got Overturned
By Lexi Inks
Get Even More From Bustle — Sign Up For The Newsletter