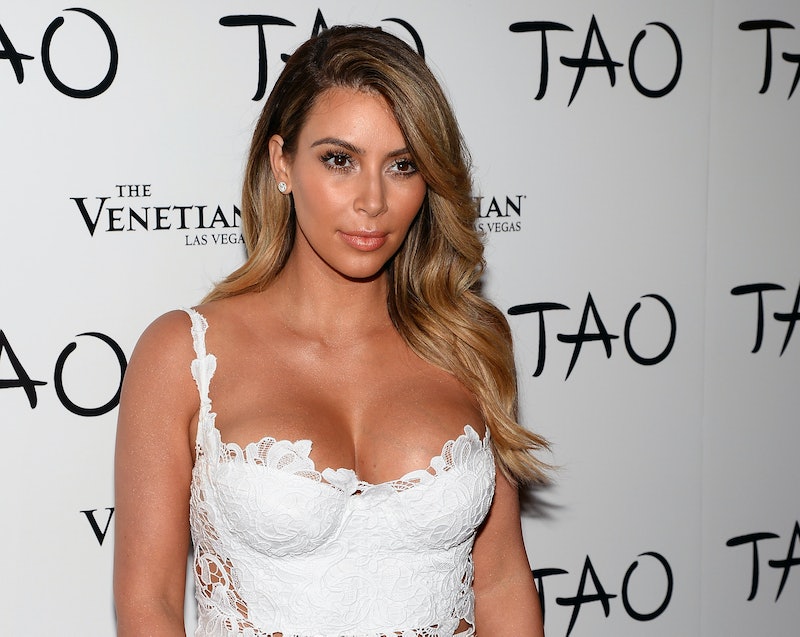 On Wednesday night, Kim Kardashian appeared on The Tonight Show with Jay Leno, where she flaunted (and for good reason) her appearance after giving birth to North West in June. You go, girl! She wore a gorgeous white-lace, fitted dress over a black bra and hot pants that left little to the imagination and probably shut up anyone that's still saying that Kardashian will never get her pre-baby curves back (even if her mid-baby curves were beautiful too). The 33-year-old reality star talked her fat-shaming haters, her Instagram post that killed that Internet, and why she'll no longer be a Kardashian after her second trip down the aisle.

Still, with every word Kardashian uttered, we couldn't help but notice something was... different. And has been different since the Keeping Up with the Kardshians star began dating Kanye West. So what's amiss? Read below to see everything that has changed since Kardashian began praying to Yeezus.

Remember back in the early days of Kardashian when the reality star's family was convinced she had a shopping addiction and they staged an intervention? She probably did, considering we watched Kourtney almost have an aneurysm when she heard that Kim had picked up $20,000 worth of merchandise in one store. But what happened to all the reality star's expensive clothes? Well, West just threw them away. That's an extreme amount of high-priced clothing to be thrown away just because your boyfriend doesn't like them, but Yeezus commanded. He did replace her lost items with undoubtably higher-end, Kanye-approved designer pieces, which was nice, but still: We remember the days when Kim loved shopping for her own clothes.

Back in September, again acting on West's advice, Kim fired her longtime publicist, Jill Fritzo, and signed on with Slate PR co-founder Ina Treciokas. West reportedly advised Kim to break away from the family fame machine (that she's basically fueled, no offense Khloe/Kourtney/Kris) to focus on creating her own team. We'd be sad about the end of the era, but based on the nature of recent Kardashian press, maybe it is time to move on.

She ain't no gold digger, but she ain't no Kardashian either. Because after being on the receiving end of the most epic proposal of 2013, Kim admitted she will no longer be called by the name that made her famous in the first place. That's right, arguably the most famous of the Kardashians will become Mrs. Kanye West. But why? Kim explained her reasoning during her interview with Jay Leno: "My daughter's name is West, and we're a family." She plans to keep "Kardashian" as her middle name, and, considering how much it's worth, that's probably a smart move. I guess you can take the girl out of the family but you can't take the family out of the girl, Kanye. Especially one managed by a Jenner.

4) KEEPING OUT OF THE SPOTLIGHT

After going into what we could basically call hibernation after the birth of baby Nori in June, Kim's exposure to the outside world has been kept at a minimum. Despite his very public proposal, West's an extremely private person, and, according to Kim, the fat-shamers that terrorized her throughout most of her pregnancy had a big effect on her desire to be out in public. "It changed how I am," she told Leno, "I've tried to live more of a private life." Kim's ass, however, is still apparently very public property.

The most disturbing change to Kim's behavior since she started dating West? Girl seems to not have an opinion about anything anymore. The spoiled reality star, who came complete with the catchphrase, "You're jealous," used to get whatever she wanted, when she wanted it. But, now, it's all about Kanye. Kim dresses for the musician, allows him to draw up a dress code for their four-month old baby, and lets him have whatever he wants at their wedding. Yup, KANYE WILL BE PLANNING THIS WEDDING. As Kim told Leno, the reality star wants "Kanye to have whatever he wants." Then again, she's already had two weddings to control — perhaps it's simply first-timer West's turn? Still, it seems the church of Yeezus has commissioned a full-on exorcism of his new fiancé. We're only left to pray the confident, independent Kim comes back to us soon.