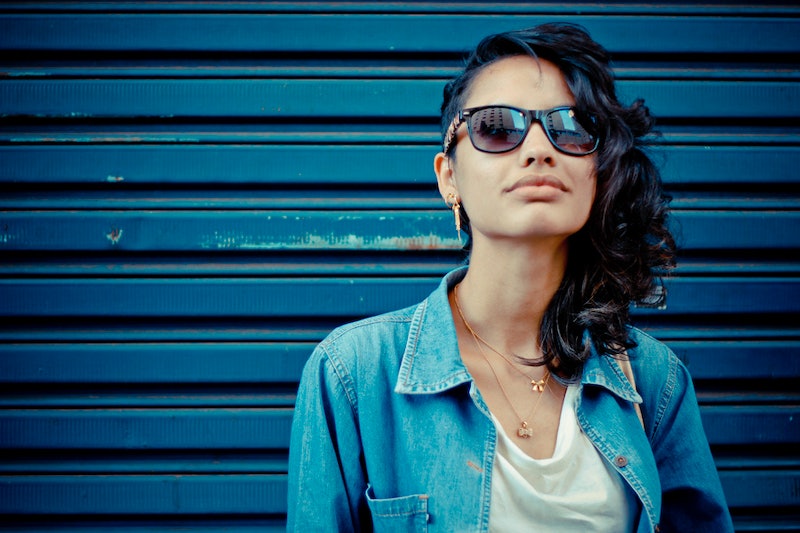 As a long-distance relationship (LDR) connoisseur, it's safe to say that distance does make the heart(s) grow fonder, but I also think making a long-distance relationship work is based on how much relationship energy each partner puts into it. That said, approximately 14 million people are in LDRs as of 2015, 4-5 million of them unmarried, so they must be doing something right. Ten percent of marriages in the U.S. started as LDRs and 3.75 million married couples are in an LDR. About one-third (32.5 percent) are in college.

With all the people on the planet—72 billion (!!)—there are plenty of men and women to date, so I don’t think anyone gets into an LDR without wanting to, like, "Hey, you know what would be a great idea? Let's be in a long-distance relationship!" I think when people decide to have them, they have faith that the relationship will last until they can be united for good (or not, depending on what each wants out of it; I know some couples with long-distance marriages and they seem very content).

There are all kinds of reasons people get into LDRs:

For instance, I know a married father, Chris, with three kids who works in Manhattan (in banking) Monday-Friday, then commutes home to his family in Chicago on weekends. (Plus side: he earns tons of airline miles to save for future vacations with his family.) Chris said that after his old employer in Chicago folded, he was stuck—and had three teenage mouths to feed (as well as his and his wife’s). “Manhattan always seemed to be recruiting bankers and men in finance,” he said, “so I widened my job search and got several job offers there while getting none in Chicago.”

Yes, some long-distance relationships stay that way—for instance, 2.9 percent of all married couples in the U.S. are in one. However, most people in LDRs are in them because it’s usually temporary and there’s an end date—someone is finishing up a semester of college or someone has to go to another location for work, but will be back in six months. If you don’t have a planned end date, I suggest creating one. It’ll give you both something to look forward to, and we’re all better at getting things done when we have deadlines, right?

2. It makes you closer — even sexually.

I know, you may be rolling your eyes how this is the biggest oxymoron. But, just because you’re not in the same physical space as your significant other, it doesn’t mean you don’t grow closer, emotionally — and physically. After all, I know people not in long-distance relationships who only see each other a couple times a week. And, when couples have kids, they sometimes see each other even less (one parent is shuffling them off to school on their way to work while the other is at work, cleaning up the kids’ toys, or planning what to make for dinner).

Researchers at Queen's University in Ontario and the University of Utah found that couples in long-distance relationships experience more intimacy, communication, and satisfaction. LDRs also make you closer by limiting the amount of time you “talk”—whether that means texting, Skyping, or actually talking. I know there’s WhatsApp, which allows you to send each other messages without having to pay for SMS. But, by not having access to each other 24/7 (because of varying schedules, timezones, etc.), the time you do have together tends to count more. And, with all the technology out there, there's no excuse to not make it work or at least try your best to make it work (again, though, it's most ideal when you have an end date in mind).

3. It makes you think outside the box.

Whether you’re preparing a surprise package to send to your loved one (sort of like care packages from parents when you were in college—weren’t those the best?!), composing a handwritten love letter, or deciding which city to meet in next (one LDR couple I know rarely visit each other’s towns; instead, they prefer to meet in a new U.S. location each time, which I think is pretty darn cool), now’s the time to be creative. Thus, it makes the partner on the receiving end all the more appreciate of you and your cleverness. And, when/if you are in the same city again, you can still do these sweet, romantic things for each other—from sending letters in the mail to planning fun excursions.

4. It makes you come up with fun dates.

Like being creative in the ways you communicate, now’s the time to brainstorm and think up long-distance dates—normal ones and unique ones. Just because you’re not physically sitting at the same dinner table, it doesn’t mean you can’t eat or have drinks together over Skype. Coffee dates, ice cream dates, food dates… the possibilities are endless. With the way technology is today, you can also “bring” your long-distance love along with you throughout your day, giving him/her a tour of your city, your apartment, your work… The movie Hank and Asha demonstrates this very well. So, set dates and keep them! Which leads to my next point…

5. It makes you accountable — and communicate better.

When you only have “x” amount of time to talk and see each other online, it makes you accountable (a very valuable trait, long-distance relationship or not). You don’t want to miss your 7 p.m. phone call or Facetime date, do you, because who knows when your S.O. can talk again? Then, when you are together again, you’ll (hopefully) still have the being-accountable mindset, plan dates, and show up when you say you will show up. Basically, this is all to say that you communicate better and perfect your communication skills and styles of doing so.

6. It allows you to explore your own life and interests more.

Even people in non-long-distance relationships need time to themselves. When your S.O. is back in the same city with you, you two should have alone time, also. When you are apart, you can explore new activities and hobbies on your own or with friends. Some, you can later do together while others may be better left to do on your own (like knit or that wine-drinking/painting night with your girlfriends).

7. It gives you something to look forward to.

An old therapist of mine used to warn me not to “jump right in” when starting a new relationship, saying the crash-and-burn rate was higher that way versus parceling togetherness out. She equated it to eating ice cream—if you eat it every day, it loses its novelty. If you eat it once or a couple times a week, however, you start to look forward to it. From my past LDRs, I know my then-boyfriend and I really looked forward to our phone dates, getting mail from each other (yes, physical mail!), planning trips to see each other, and seeing each other.

More like this
How To Spot The Signs You’re Being Love Bombed
By Lea Rose Emery and Mackenzie Sylvester
Are Gemini & Scorpio Compatible In A Relationship?
By Kristine Fellizar
'Love Island’s Biggest Draw Is Still FOMO
By Chanté Joseph
How To Get Over Someone, According To Experts
By Brittany Leitner
Get Even More From Bustle — Sign Up For The Newsletter