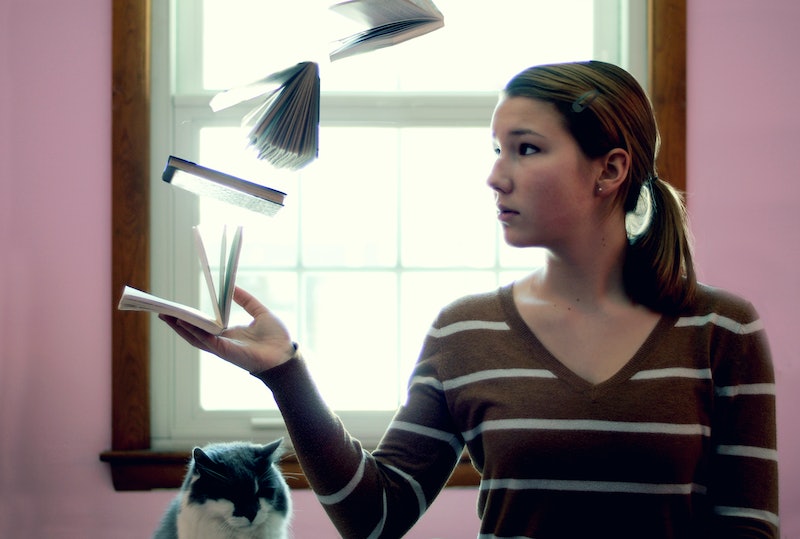 With bookstores boasting entire sections of self-help and personal transformation tomes, readers today are hardly lacking in how-to books, advice-laden reads, and stories filled with moral lessons. Wondering how to spark the perfect romance? There’s a book for that. Trying to kick an unhealthy habit for good? Head over to your nearest bookstore. Interested in becoming an expert chef/yogi/professional organizer/gardener/makeup artist/dog-trainer/tarot card-reader? There are shelves full of authors who’ve got you covered.

But even before these advice texts grew into their own unique, must-read genre, books were filled with suggestive tips on how one might best live. Well, for better or for worse, that is. Inevitably, some of these classic words of wisdom are more helpful than others — and some are best ignored entirely. From just plain bad advice to incomprehensible nonsense, here are 10 tips from classic literature that you’ll probably want to ignore today:

“One cannot have too large a party.” —Emma

This really depends on how much you enjoy the company of others (I don’t) and how much noise those others make (anything exceeding past "appropriate for tea with Margaret Thatcher" is too loud). However, I can definitely make the case for a too-large party. If your living room furniture has been piled into one corner to make room for a bracket-worthy beer pong tournament, you might want to take a moment to reevaluate. A party that overflows outside of the house and onto the neighbor’s lawn has probably expanded beyond the limits of propriety. Anything that could potentially result in the summoning of police is a no-go.

“Single women have a dreadful propensity for being poor. Which is one very strong argument in favor of matrimony.” —Letters

In other words: “marry for money.” Unless you’re itching for your own reality television show, or relish the idea of rap songs being written about you (and hey, in that case, more power to you) don’t do this. Instead, Pinterest-project yourself a bracelet that says: “WWGSD?” (“What would Gloria Steinem do?”).

“Every now and then when your life gets complicated and the weasels start closing in, the only cure is to load up on heinous chemicals and then drive like a bastard from Hollywood to Las Vegas, with the music at top volume.” —Fear and Loathing in Las Vegas

While this may have worked for Hunter, it will definitely not work for average-human you. You will get a DUI, your car will get impounded, and nobody will want to be friends with you anymore. Instead, when your life gets complicated and the weasels start closing in, GrubHub some frozen yogurt, Netflix-binge on Ryan Gosling films, and call animal control.

“Never trust a cop in a raincoat.” —Fear and Loathing in Las Vegas

I’m not even totally sure I know what this means, but the usefulness of this advice is probably contingent on whether or not it is, in fact, raining.

“If you lack backup when you happen upon crooks caught in the act, disguise your voice and pretend to be the police. If that fails to produce the desired result, throw a stone through a window to feign a gunshot.” —Nancy Drew: The Sign of the Twisted Candles

Bless the sincerity of this infallible, titian-haired, girl-detective’s heart, but this is not going to work. It’s just not. Don’t do it.

“If you see something resembling a shark in a river, don't fret. It's more likely to be a small submarine operated by thieves.” —Nancy Drew: The Mystery of Lilac Inn

This really raises more questions than it answers. For example, what is a saltwater fish doing in a river? Better yet, what is a submarine doing in a river? How deep is this river anyway? Are the submarine thieves lost? Furthermore, in what universe is the discovery of criminal underwater navigation preferable to a comparatively harmless river shark?

“There’s no use trying, one can’t believe impossible things.” —Alice in Wonderland

This kind of defeatist attitude will get you nowhere in life. And quite frankly, it’s a little hypocritical, coming from Alice, famed traveler of rabbit holes. Substitute for: “Be all you can be,” “Thoughts become things,” and “If you build it, he will come.”

“Speak in French when you can’t think of the English for a thing, and turn your toes out when you walk.” —Through the Looking Glass

This bit of advice will not get you very far, linguistically or geographically. Especially if you do not speak French.

“All you have to do is say something nobody understands and they'll do practically anything you want them to.” —The Catcher in the Rye

This suggestion might actually be worth a shot, especially when dealing with alien beings, like politicians, and small children; but I wouldn’t make a regular habit out of it.

“When you're not looking, somebody'll sneak up and write ‘fuck you’ right under your nose.” —The Catcher in the Rye

This is really unlikely to happen, but if it does you may want to consider filing a report with the police; and preferably with an officer who is not wearing his raincoat. You’ll want to make sure he’s a different officer from the one who busted up your house party. Don’t mention the river shark you saw earlier.