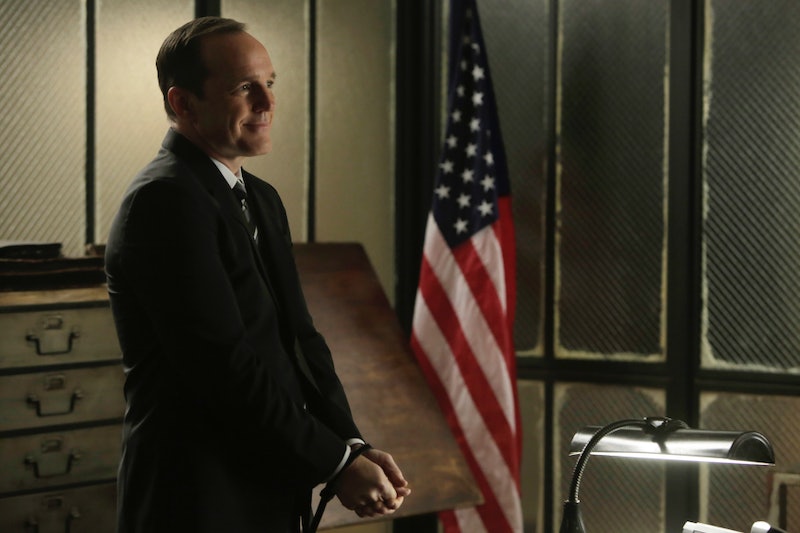 Like any good Agents of S.H.I.E.L.D. fan, this weekend I headed to the movie theater to dutifully line up for the opening of Avengers: Age of Ultron. After the deep impact that the last Captain America movie had on the show, I didn't want to risk being horribly behind on S.H.I.E.L.D. when it airs this week. We already know that there is an overlap between the two and I was hopeful (if not optimistic) that the blockbuster would answer the lingering question of what Theta Protocol is on Agents of S.H.I.E.L.D. While the movie had plenty of action and plot, it unfortunately only opened up more questions about Theta Protocol. There was enough information to formulate a few new theories, which I have for you right here. Beware this is based on both Agents of S.H.I.E.L.D . and Avengers spoilers, so proceed with caution. Now, this may be crazy, but I think that Theta Protocol is the creation of a new Avengers team.

I know, there is only one team of Avengers and we having been watching them grow independently and as a team for years now. But what if Coulson and/or Fury decided that this one band wasn't enough? S.H.I.E.L.D. saw Coulson telling Maria Hill that Theta Protocol was a go, and that they needed to call in the Avengers. Then Age of Ultron ended with a squad of (essentially) newbies — Scarlet Witch, Falcon, and War Machine — all gathered around Captain America preparing to be trained. Are they the new team? They may just be a part of it. I think that they, along with the other "enhanced" people that Coulson has been tracking, are all part of Theta Protocol, an attempt to build the Avengers 2.0.

This would fit in neatly with the Inhuman mythology that S.H.I.E.L.D. has been building for months now (though they have been very careful to avoid calling them that). Enhanced people like Skye and Lincoln would fit right in with someone like Scarlet Witch who is able to use her powers for many different ends. If Coulson really has been tracking people with abilities, it would follow that he is trying to harness their power for good. Plus, he already has a pretty good idea of what it takes to build a super-team.

Before Tahiti, before his small squad of S.H.I.E.L.D. agents was even on the radar, Coulson was the man in charge of collecting all of the heroes in the Marvel Cinematic Universe and trying to get them to work on the same side — to become a team. The Avengers Initiative was his baby, and it is (more or less) working out for everyone like gangbusters. With all of the new threats to earth and the Avengers all being super busy (and sometimes not on planet earth), why wouldn't he want to build a new squad? One that is a little more accessible, but has no shortage of powers? This would also explain why Coulson is being do darn secretive about Theta Protocol. There is a lot of fear around enhanced people and just as much paranoia about what they might do. We saw this first hand when Skye went through the Terrigen mist.

If Theta Protocol really is the assembling of an expanded Avengers team, Coulson is going to have his work cut out for him explaining this to the rest of S.H.I.E.L.D. and getting everyone else on board.