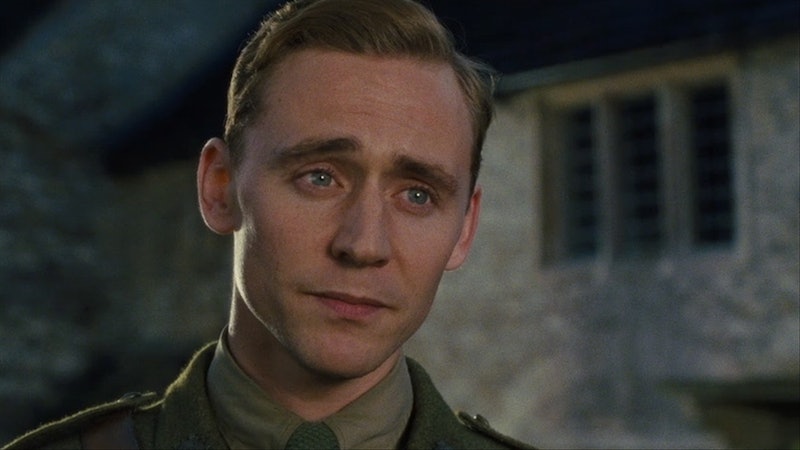 There are two things I know to be true about Tom Hiddleston. One, he's a pretty cheerful guy (some would even say he's uncontrollably excited) and, two, he's an amazing actor. That's how he's able to portray emotional scenes in films and totally sell you on his distress. In other words, when Tom Hiddleston cries in a movie, so do I. He's nailed the ability to be sad for a role to the point where looking at GIFs of him tearing up makes my heart ache for him. He's just that good.

There's something about the gentle arch of one of his eyebrows, his red-rimmed eyes threatening to overflow, and his slight frown that sends me over the edge. I have to keep reminding myself that it's a movie and that Hiddleston's not sad in real life. And, if you think I'm overreacting, just know that Hiddles totally understands feeling a deep connection to a character. “To have compassion for a character is no different from having compassion for another human being,” he once said.

It's a good thing he approves, because Hiddleston's sad moments definitely elicit compassion in me. Basically when he gets sad in a scene I want to leap through my television and comfort him. How this man hasn't won an Oscar yet is beyond me. I mean look at these nine convincing emotional moments. I would dare you not to feel something, but it's impossible.

When He Was Vulnerable In Archipelago

This was my first real experience of Hiddleston's ability to show emotion. It's about so much more than just the tears. His uses his whole body to act out despair.

When He Discovered His Lineage As Loki

Like, I know he becomes evil and kills a lot of people, but I just feel so bad for him! He's an actual sad puppy dog.

When He "Cried" On The Marvel Carpet

I think he even had Josh Horowitz fooled when he pretended to be super broken up over this being his last Marvel premiere. (Or maybe he just knew better, considering he's also in Thor 3 and Avengers 3.)

When He Teared Up In Coriolanus

He won an award for this role, which, as you can see above, was absolutely deserved. That lip tremble destorys me. Keep in mind, this was a live play so he had to cry on cue, and he did it perfectly.

When He Raised One Of His Eyebrows

I don't know how he does it, but that simple act makes him so sweet and sad looking. I just want to give him a hug.

When He Cried While Wearing A Crown

Even kings get sad.

I can't imagine the courage it took for him to have this conversation, and then to think she found him ridiculous must have crushed him. (I must remind myself he's a fictional character... It's not real...)

When He Headed To His Death In War Horse

This is the moment when he knew he was going to lose this battle and his life — and it killed me, too.

When He Smiled A Sad Smile

I'm sorry, but you are not allowed to do that to me.

For all the sad Hiddlestons above, here's a big Hiddles hug from me (and technically from himself).