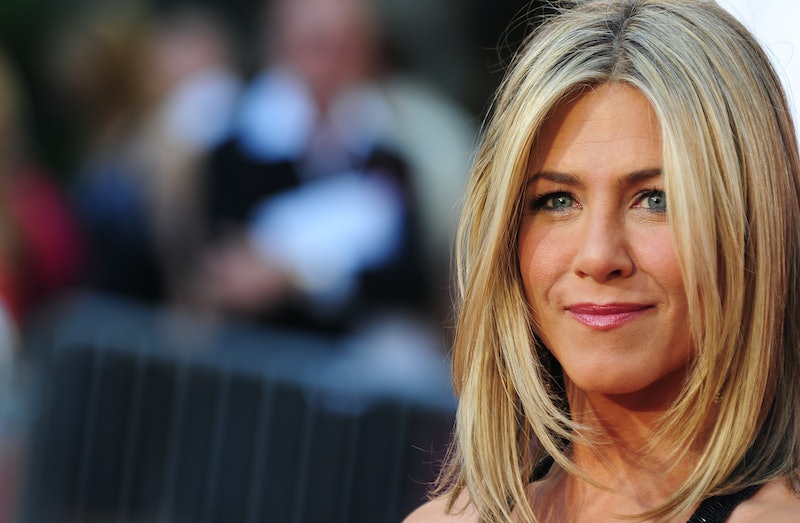 It's Wednesday... Are you wearing pink? If so, you're probably a Mean Girls fan, and boy, do I have some news for you. In by far the fetch-est news to come out of Hollywood today (screw it, this year), Deadline reports that Jennifer Aniston is in talks to star in a Mean Girls spin-off — appropriately titled Mean Moms. Well, sort of. The upcoming film would reunite Aniston with her Horrible Bosses 2 director, Sean Anders, who is both writing and directing Mean Moms. While not a direct sequel to Tina Fey's Mean Girls, a 2004 hit high school comedy that already has a sequel, it would be a spiritual successor of sorts. Described as "match[ing] the spirit of Mean Girls with an adult cast," Moms will be based off an advice book by Rosalind Wiseman, just like Girls. While Fey found inspiration in the author's Queen Bees And Wannabes, Anders will adapt her Queen Bee Moms And King Pin Dads.

Here's a quick synopsis of the film: "A happily married mother of two who moves from small-town America to the high–class suburbs suddenly must confront the cutthroat world of competitive parenting." While Aniston is the only name said to be eyeing the project so far (and she has yet to finalize a deal), that of course won't stop us from speculating wildly on which other big names will populate the cast list.

So without further ado, here's my own personal dream cast for Mean Moms. I think we'll agree that seeing this group of actors in a movie together would be...

Tina Fey As The New Mom On The Block

The movie would open with Fey's character (perhaps a high school math teacher/bartender/professional "pusher"?) moving to the typical Middle American suburb of Edina, Minnesota with her husband and two kids. There, she meets and immediately clashes with her subdivision's trio of terrifying tiger moms.

Jennifer Aniston As The Queen Bee

It's pretty much a given that Aniston would star as the Regina George-like character, the former Prom Queen who's undoubtedly the president of both the Neighborhood Association and the PTA, and goes everywhere with her two fawning sidekicks in tow.

Tatiana Maslany As The Perfect Suburbanite

As amazing as BBC America's Orphan Black is, it's about time that the fantastically talented Maslany breaks out of the cult sci-fi box and into the mainstream — she deserves to be a household name. Her portrayal of clone Alison Hendrix proves that she can do the whole perfect suburbanite routine, and it would be a hoot to watch her continually try to emulate and suck up to Aniston's character, just like poor Gretchen Wieners' failed attempts to impress Regina.

Amy Schumer As The Dumb Blonde

Naturally, any clique would be incomplete without a Karen Smith. The Inside Amy Schumer star is gaining more and more attention these days — deservedly so — and Moms would definitely benefit from her pitch-perfect sense of comedic timing, both verbal and physical.

Anyone stepping into the role of "best friend" in a Mean Girls spinoff has some pretty big shoes to fill, thanks to Daniel Franzese's performance as Damian. So who better to fill those big shoes than one of the biggest personalities out there? Burgess proved he's got the bestie routine down pat with Fey's Netflix comedy Unbreakable Kimmy Schmidt; translate Titus Andromedon's personality to the big screen and you've got an instantly iconic character.

Of course, you can't have a Damian without a Janis Ian. On CBS's The Good Wife, Panjabi's Kalinda Sharma was the first to welcome new lawyer Alicia Florrick to the firm, taking her out for shots of tequila. It's not hard to imagine Panjabi bonding similarly with Fey's character. Plus, thanks to a particularly memorable scene involving a baseball bat, we know the actress could easily go toe-to-toe with Aniston and her cronies. And casting director, take note: Panjabi's schedule just cleared up!

Chris Pratt As The Hot Dad

Sadly, that whole "happily married" part of the plot description precludes a direct Aaron Samuels counterpart for Moms, but that doesn't mean the viewers don't deserve any eye candy. Some of the tension in the film could come from the fact that the hot dad Aniston's had her eye on for a while is more interested in the new mom down the block. And who's hotter right now than Chris Pratt? But, as in shape as the funnyman got for Guardians Of The Galaxy, he still retained that believable boy-next-door charm; it's easy to picture him as the single dad/soccer coach type.

Logan Lerman As The Son

Lerman perfected the awkward high schooler routine for 2012's The Perks Of Being A Wallflower, and, basically because this terrific young actor deserves to be in more stuff, I'm pitching him for the role of Fey's older, college-bound son.

Maisie Williams As The Daughter

I mean, duh. Is there a more lovable young actress right now than Game Of Thrones's Arya Stark? Williams would be perfect as Fey's spitfire younger child, helping her mother in her battle against the Mean Moms while simultaneously holding her own against their daughters at school.

Any Mean Girls spinoff would not be complete without Fey's frequent partner. Anders wouldn't even have to give Poehler a new role — she could just reprise her cameo as Regina's "cool" mom.

More like this
All The Sneaky Lindsay Lohan Movie Easter Eggs In Her New Ad, Explained
By Stephanie Topacio Long
'Mean Girls' ​​Daniel Franzese Spoke Candidly About Conversion Therapy
By Rachel Mantock
Kimberly J. Brown & Daniel Kountz Looked Back On Their ‘Halloweentown’ Romance
By Stephanie Topacio Long
Alicia Silverstone Has Recreated An Iconic 'Clueless' Scene
By Frances Stewart
Get Even More From Bustle — Sign Up For The Newsletter