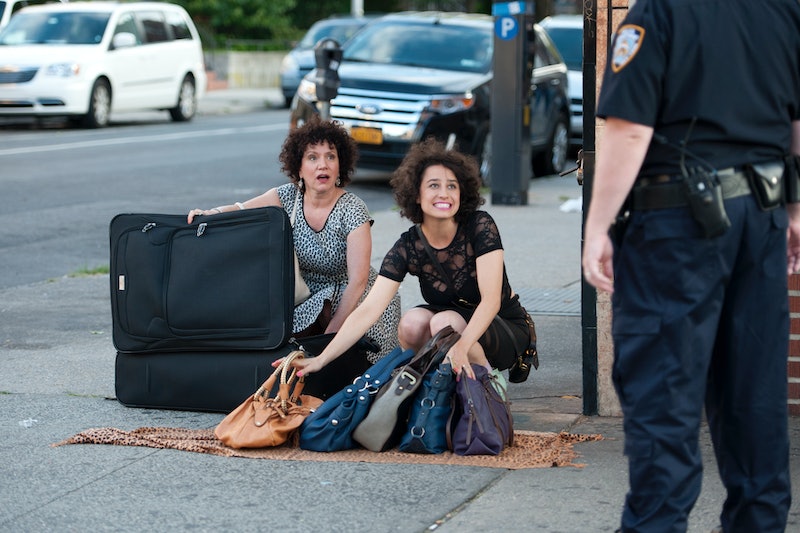 I'm pretty confident that the number one thing that my mom and I bond over is our shared love of entertainment — books, movies, actors, and particularly the good ole TV. Although I will be miles away from my mom this Mother's Day (which also happens to be my birthday, so perhaps the worst day to not be with the woman who birthed me), I'm here to encourage you all to have your mom recommend her favorite TV shows to you over the mom-centric holiday. Think that's absurd? Well, it's not, and I can prove it.

Think about it: Parents control the TV when their kids are young. They dictate to their little ones what to watch, when to watch it, and how much to watch it. And that's exactly how I got my own habit: The TV apple doesn't fall far from the tree. While I sometimes wish I had my mom around to tell me to stop marathoning Netflix and go outside, my mom, as a lover of TV, isn't much better herself. As a child, I was started on a diet of children's programming like Sesame Street and movie musicals (of course, all in moderation). This slate of programming as a child led to my love of singing and dancing on shows as an adult (my mom and I both watched Glee). And even if grown-ups (sans children) are watching kids shows on the regular, something they watched with their mom as a child probably influenced what they watch today.

Parents introduce us to topics and ideas, often molding our likes and dislikes. Television is no different — so thanks, Mom, for having such great taste. Of course, I eventually grew to choose my own TV-obsessed path, but isn't that what parenting is really all about? Teaching your kids about love, respect, hard work, and the beauty of a pristinely written TV miniseries — and then letting them go out on their own and hope they make smart decisions (with the remote)?

Although it is a truth universally acknowledged that once a woman becomes a mom, her perceived coolness level somehow drops, my mom knows what's up when it comes to good TV; she knows what's new and exciting and is basically a DVR Queen. And I would wager your mom might be too — just give her a shot. While not every mother out there has been gobbling up think pieces on the importance of the "Golden Age of Television" that we are living in right now, don't write them off. My mom loved the original 1984 alien miniseries V and still cherishes moments like Luke and Laura's wedding on General Hospital — things that made me the TV aficionado I am today.

What's more is that if you watch something your mom loves, chances are she'll return the favor and join you in your next TV obsession; it's a two-way street. While my mom has introduced me to entertainment cultural touchstones both old and new, I have also made suggestions to her and we've actually grown closer through our shared TV obsessions. When I started marathoning Lost, my mom became more hooked than I was, which is saying something. We traveled to Hawaii as a family for my sister's wedding and the two of us knew our trip wouldn't be complete with going on a Lost tour. (I think she might have been more excited for the Lost tour than my sister's wedding. I mean, jusssst kidding, Erin — you awesome older sister, you.) My mom and I — with my dad and my boyfriend who were being supportive significant others — went to Kualoa Ranch on Oahu. We got to unravel some of the mysteries of the island and seek out the smoke monster — and banter with our tour guide about what really happened during the series finale of Lost.

When vacations aren't really in the cards, TV can actually help keep you close, even when your mom lives across the country. I live states away from my mom, so sometimes our phone conversations consist totally of a TV show we are both watching and our theories about it — and it's even better when we have dueling viewpoints. Why wouldn't I trust my mother's taste in TV? A woman who can argue about what's up with the male clones on Orphan Black for hours is a woman who knows what's up. She literally just called to tell me about an upcoming MRI she's getting and how she's scared she will feel like Helena stuck in that box with her imaginary scorpion.

So be a pal and give your mom the gift of actually listening to her this Mother's Day, and you may be surprised. And just so you really, really believe me, here are the "must-watch" shows whose glory I'd never have the pleasure of knowing if weren't for my mother.

Okay, pretty much all of the United States watches The Walking Dead, but my mother was the one who loaned me the DVD sets of seasons 1 and 2 and pretty much forced me to get-a-watching. We may have dissenting opinions about Carl's mom, Lori, but if there's one thing my mother and I can bond over, it's our love of Rick Grimes and crew.

Breaking Bad was a show that I had every intention of watching, but was slow on the uptake. Once my mom (and my dad) encouraged me to watch it, I knew I couldn't wait to start the phenomenal series any longer. So you could say that meth dealers really brought my family together.

I still lived with my mom when Homeland first premiered in 2011. And I remember she didn't force me to watch with her, but gently encouraged me to check it out on my own. I didn't think I'd be interested in a terrorist-CIA storyline, but four years later and I'm still obsessed with the woman who is Carrie Mathison. (Not to mention, I never would have met Saul's beard! Thanks, Mom!).

Diana Gabaldon's Outlander books used to sit on my mom's bookshelf when I was a child, and though I was intrigued, I knew I was too young to read them. (Though I definitely used to sneak some quick passage readings of my mom's romance novels.) She was so excited when Starz made the TV version of Outlander that I decided to tune in last month based on her recommendation. And I definitely have inherited my mother's fondness for romance — and Scottish men. As my mom texted me the other day, "Doesn't Jamie make you swoon?"

And hey, we aren't weirded out that we both watch a show with some serious sex scenes since we used to watch Game of Thrones together, too.

My mom has been selling me hard on the History channel's The Vikings for quite some time now. It's been so long that I can't believe the show has already been renewed for a fourth season. I still haven't watched the series, but it's on my list and my mom already converted my brother to check out the show. I know once I watch it — and love it — she'll scold me for not heeding her words earlier. (Hey, she ignores my TV suggestions sometimes, too!)

My sister and I have very different tastes when it comes to entertainment, but we both can find something we like that our mom likes. Nashville is that show that my mom and sister can talk about (while my sister rolls her eyes when my mom and I nerd out over Downton Abbey). My mom thinks I should watch Nashville because she loves it, and though I could easily see it turning into a guilty pleasure of mine (don't worry, I have others), maybe I'll leave this show for my sister and mom to have.

So this Mother's Day, listen to your mom. Ask her what she watches (or used to watch). And you may find it even brings you closer together...or you'll disagree about the fate of Don Draper in the upcoming series finale of Mad Men and get into a long-winded debate. Either way, Mother's Day bonding over TV will happen. And you will thank me.

More like this
“The Door Is Always Open” For Another 'Breaking Bad' Spin-Off, Says AMC Boss
By El Hunt
Emma Thompson, Lashana Lynch, & Stephen Graham Lead Netflix’s 'Matilda'
By Sophie McEvoy
Martin Hancock’s Wife Played A Key Part In His Return To 'Coronation Street'
By Catharina Cheung
Paapa Essiedu Likes To Keep His Relationship Pretty Private
By Maxine Harrison
Get Even More From Bustle — Sign Up For The Newsletter